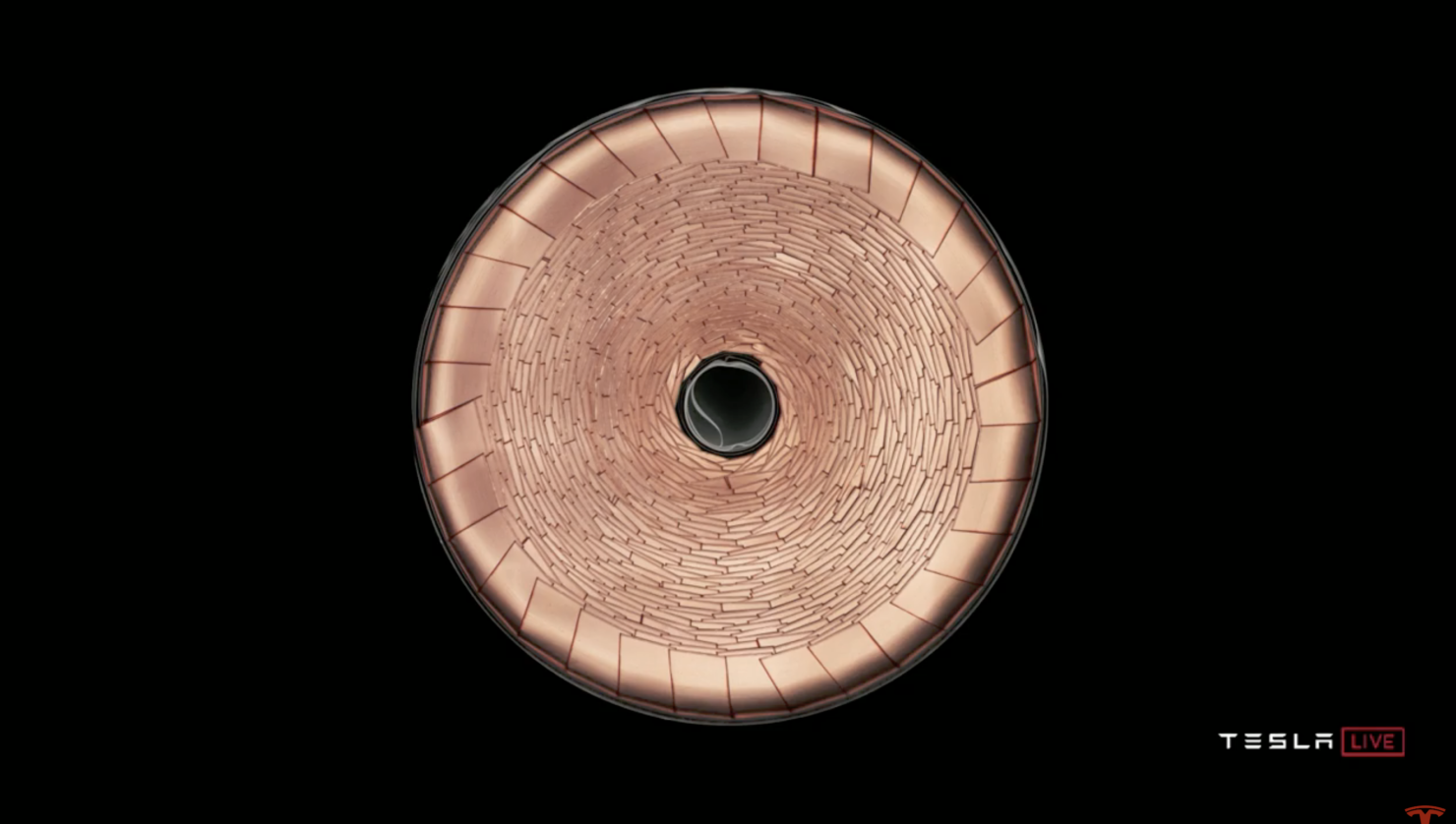 Electric vehicle and renewable energy products manufacturer Tesla Inc. (NASDAQ:TSLA) conducted its Annual Shareholders Meeting and Battery Day 2020 events today, with the latter coming after a considerable delay. At the Battery Day presentation, the company highlighted key aspects of its long-term strategies, some of which will not materialize before 2030. This fact was confirmed by company C.E.O. Mr. Elon Musk yesterday on a post made on the microblogging platform Twitter, and at the event, Mr. Musk presented the details along with Tesla's Senior Vice President of Powertrain and Energy Engineering Andrew David "Drew" Bagalino.

The updates focused on Tesla's efforts to scale up its battery production and reduce the costs of manufacturing its vehicles. For these purposes, the company's executives highlighted a five-step plan that involves new manufacturing technologies and factory space optimizations amongst other enhancements.

To achieve these objectives,  the company has outlined two broad goals that involve scaling up battery production and reducing the cost of cell production. Specifically, Tesla intends to scale up its battery production to 20 TWh in the long term, but it cites excessive investments in both labor and capital towards achieving this goal. As Mr. Bagalino outlined in the presentation, Tesla expects $2 trillion in investment and 28 million in labor to achieve this goal. The automaker believes will allow it to convert the entire global fleet of vehicles to electric power, and it used the figures to cite the need for advancements in manufacturing technologies.

Tesla's second goal is to reduce its cost of producing battery cells, and the company's presentation centered around meeting this objective. Tesla outlined five key strategic pillars for bringing down its cost-per-kilowatt-hour and the bulk of these involved cell manufacturing and anode/cathode optimizations - with only one focusing on factory and assembly optimizations.

Improvements in battery cell design will contribute to Tesla's cost reduction program, with the company intending to achieve this by simply making the cells wider. To back this design decision, the company showed off data that appears to be compiled internally as confirming that the wider a cell gets, its manufacturing cost is reduced and vehicle range increases.

However, this diameter increase comes with a significant drop in supercharging times, which given the company's current philosophy does not allow the product to be feasible for market use. For solving this problem, Tesla intends to debut what it terms ''tabless'' cells. These cells will have the electron conduction pathways (or electricity pathways) through lasers for improving charging times.

Touting the strength of this innovation, Musk stated that the new cells officially referred to as 4680 (46mm diameter, 80,, height) have shorter path lengths than tabbed cells and an improved power-to-weight ratio than them.

The next agenda on the company's list is scaling up its battery production and reducing facility footprint. To achieve these, Tesla will optimize the four key steps of its production process. These are printing the cells, assembling them, maintaining a high-speed continuous assembly and testing the cells through charging and discharging via the formation process.

More importantly, this is the area where Tesla's $200 million+ Maxwell acquisition comes into play, and this was the only part of the presentation where Maxwell was directly mentioned. Tesla's C.E.O. commented that Maxwell's process, while impressive, was still in the early stages and Tesla has worked to develop it. According to him, "since the acquisition, we’ve revved [revised] the machine that does dry coating four times", and he further elaborated that prior to full production, Tesla should at least be on the machine's sixth or seventh revision.

Improvements will also allow Tesla to enable a single manufacturing line to touch an output of 20 GWh, and these will be combined with facility speed and density improvements that allow more output per unit of area that Musk believes are critical for ensuring a competitive edge.

A small but highly important reveal that sits right at the heart of Tesla's battery cells will involve the company using silicon in its batteries. Tesla intends to replace graphite with silicon as the anode material in its battery cells, and it cites two facts as the rationale. First, silicon's abundance will provide for easy access to the materials and second, Tesla claims that silicon has nine times more lithium than graphite does. In a battery cell, Lithium 'ions' move from the anode to cathode for providing electric charge and generating power.

The primary problem behind using silicon as an anode material is the material's expansion when charged explained Tesla. To combat this, the company will stabilize the silicon surface with an "elastic ion-conducting polymer coating" and integrate this into the electrode. The end product was dubbed as "Tesla Silicon", and through this, the company hopes to increase vehicle range by 20% and reduce cost by $1.2-per-kWh.

Cathode Manufacturing Optimizations Will Provide For 12% of 56% Cost Savings

Tesla plans to reduce its cost-per-kilowatt-hour by simplifying its cathode manufacturing process. Through these, the company will remove metal sulfate from the process; an act that reduces the investment required for production activities by 66% and process cost by 76%. Additionally, these also reduce cathode-specific $kw/h by 15% and through removing sulfate, Tesla will reduce lithium costs by 33%.

More importantly, Tesla also revealed key production and sourcing details at the event which will help it reduce costs in the American market. The company will set up a cathode manufacturing plant inside the U.S. as it looks to reduce the distance traveled by nickel by 80%. As Musk humorously commented during the event, "it's a small world journey of I am a Nickel atom and what happens to me," to highlight th excessive transportation costs for the metal.

Right next to this plant Tesla will operate a facility that relies exclusively on electricity (which won't be much if it's an office) and in a major reveal, the company also confirmed that it will mine lithium inside the U.S. through a process that uses sodium chloride. For this, Tesla has secured rights to a mining area and it intends to fill the mined land back up once it's extracted the metal.

Single piece casting has been reported several times for Tesla vehicles, and at today's event, the company claims that it will use a high-pressure die-cast aluminum that does not require heat treatment or coating post-casting for this purpose. These two processes affected the shape of prior single-cast pieces, explained the company, and the material has been designed in-house by Tesla.

The company will also remove support parts within its battery packs and line them with a new fillar that will be structurally adhesive in addition to being flame retardant. This will allow the packs to serve a dual-purpose of being an energy device and providing structural support. The changes are similar to the evolution in aircraft wing design stated Musk, who went even further by stating, This is even better than what aircraft do. They cannot do this because their fuel is liquid.”

Through the new packs, Tesla claims that its vehicles will safer from side impacts, have a more stiffer structure and improve their feel. Musk touted his confidence in the design by claiming that, “Long term, any cars that do not take this architecture will not be competitive”. Overall, Tesla expects them to reduce mass by 10%, provide a 14% range increase opportunity and use 370 fewer parts. They will also contribute to a simplified factory that reduces 50% in investment per GWh and results in a 35% floor space reduction.

The changes will be implemented over the next three years highlighted Musk and followed up by revealing that Tesla hopes to manufacture at least 20 million vehicles per year in the long run. He also hopes that during the next three years Tesla will be able to manufacture and sell a fully autonomous electric vehicle that costs $25,000, in a move that will help it with market penetration.