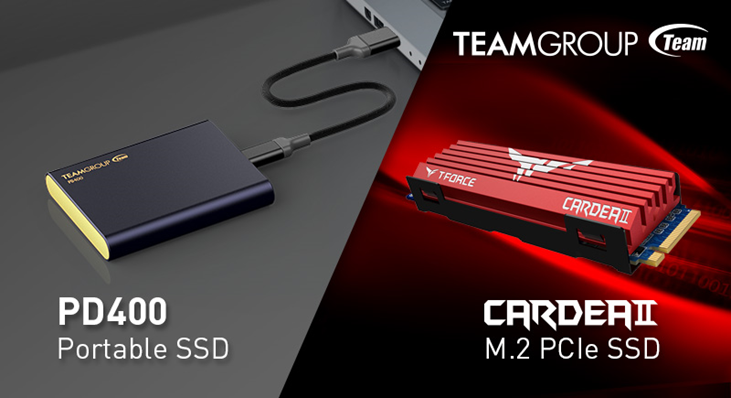 T-FORCE M.2 PCIe SSD – CARDEA series release the CARDEA II solid state drive with improved performance. The gaming fin type cooling module has a patented design (Taiwan Utility Model Patent No. M541645) and has passed rigorous tests and burn-in test. It can be cooled down about 10 degrees in a closed space, and 30 degrees in an open space. The radiating performance can be increased by 15% compared with a traditional cooling module. Module’s superconductivity – thermally conductive adhesive can effectively accelerate the heat transfer process, so the speed performance won’t be affected by high temperature anymore. CARDEA II uses a PCIe Gen3 x4 high-speed interface and supports the latest NVMe 1.3 protocol. It has a truly outstanding sequential read/write speed of up to 3400/3000 MB/s, and random read/write speed of up to 180K/160K IOPS.

With the size of a palm and the color of ocean blue, the case of PD400 external solid state drive is solution enhanced. Data can be safely protected with three major protective features: pressure resistant, shockproof, and waterproof. The sophisticated design is low key and yet tasteful. PD400 only weights 60g, which is highly portable. PD400 uses the latest generation of high-speed USB 3.1 Gen1 interface, which is four times faster than a general external hard drive in transfer performance. The time for data accessing can be greatly reduced and it can be used more freely in different environments. PD400 is both high performance and tasteful. It is the top choice for an external solid state drive that combines convenience, taste, and performance.