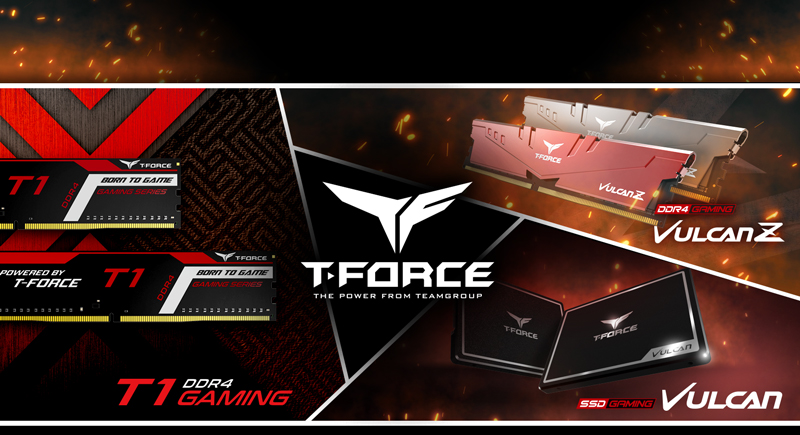 Team Group has released its latest line of gaming SSDs and memory under its T-Force brand. Team Group’s entry-level gaming RAM is the T-Force T1 Gaming Memory that comes in 2400MHz and 2600MHz speed with capacities of 2x8GB or 4x4GB. The sticks of RAM are compatible with AMD and Intel, with the added support of Intel XMP 2.0 profiles. The sticks run at 1.2 volts to reduce power consumption and heat.

The sticks use "special" ink, directly applied to the PCB. Team Group says the ink was designed and tested to work in high-temperature environments. Team Group uses this method instead of a traditional heat spreader. This allows for a wider selection of air coolers with lower clearance on the RAM.

Moving up to the higher end, the T-Force Vulcan Z Gaming Memory comes in at speeds ranging from 2666MHz to 3200MHz at capacities of up to 32GB in a configuration of 2X16GB. The Vulcan Z lineup adds a one-piece, low profile, 0.8mm thick heat spreader with "superconductivity" (a thermally conductive adhesive), that comes in two colors red and grey, to help keep the memory running cool. These sticks lack RGB and to get RBG sticks, you will have to look at the Xcalibur, Delta, or Night Hawk line of RAM which comes at higher speeds and capacity.

Depending on the kit, the voltage will be at 1.2V or 1.35V with the CL rating of 16 at 2666MHz and 18 for 3000MHZ and 3200MHz. The IC’s used TG says is selected through a rigorous testing process and tested for complete compatibility and stability.

Pricing and availability have not been made available at the time of writing.

The newest SSD to their lineup is the T-Force Vulcan SSD which is a standard 2.5 inch 7mm form factor using the SATA3 (6Gbps) protocol. It is available in capacities of 250GB, 500GB, and 1TB. The SSD looks quite nice with the shiny T-Force logo in the center.

Performance wise, the 1TB model can reach speeds up to 560/510 MB/s read/write with IOPS hitting 90K/85K (smaller capacities are a bit slower on reads at 500 MB/s with IOPS writes at 80K). Controller details were not mentioned. The drive uses 3D NAND along with built-in error correction. The drive also uses wear-leveling technology in conjunction with ECC to ensure a long secure life. The drive is rated at 1,000,000 MTBF (Mean Time Before Failing) along with a 3-year warranty.

Pricing and availability have not been made available at the time of writing.