Thought Android tablets were the only ones that provided users with impressive hardware and pricing variables. You thought wrong, and that has been proven thanks to the emergence of Taipower X98 Pro. Taipower X98 Pro is a very affordable and very large Windows 10 tablet that not only features impressive hardware specifications, but also comes with a very affordable price tag of $220. Let us see what is present underneath the hood in order to get a better idea of what we can get with $220. 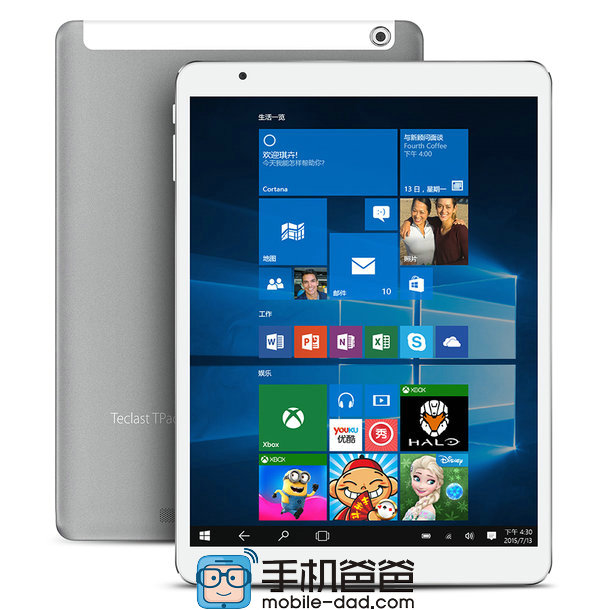 The latest product showing up on Mobile-Dad shows that even tablets running Microsoft’s Windows 10 platform can provide the best ‘bang for the buck’ solution for consumers. On this occasion, Taipower X98 Pro is armed with Intel’s 14 nm Z8500 SoC, which is running a quad-core processor at 2.24 GHz. Sure, it will not come close to the performance of Exynos 7420 or Snapdragon 810, but then again, you do not get such mobile products running the aforementioned mobile SoCs for $220 now do you?

Moving on, supplementing the powerful quad-core CPU is 4 GB of LPDDR3 RAM, so in terms of multi-tasking operations, you are pretty much covered all the way. Coming to the screen size, Taipower X98 Pro possesses a 9.7 inch one, with a resolution of 2048 by 1536 pixels. 64 GB of eMMC flash storage should be plentiful for internal memory, and we have yet to figure out if the slate supports a MicroSD card slot or not.

Leaving all that behind, let us look at the amount of battery life that the slate will be able to provide. For a $220 Windows 10 tablet, Taipower X98 Pro is incorporated with a 6,080 mAh battery pack, which will deliver sufficient juice to the impressive tab;et. By far, the three most attractive features of Taipower X98 Pro is the Windows 10 OS, impressive hardware specifications and killer price tag. It is safe to say that if OnePlus One was labelled as the ‘Nexus Killer’, then Taipower X98 Pro should be labelled as the ‘Nexus Tablet Killer’.