PCMag has published their 12th annual "Fast Mobile Networks" test today, and the results finally show the beginning of 5G has made up for a "Radically new landscape" in the networking industry and a "surprising winner." According to the data happens to be T-Mobile, with the fastest network in the United States.

T-Mobile Leaves Other U.S. Networks Behind and Takes the 'Overall Winner' Award Home

For those wondering, PCMag has shared some details about how they have conducted this testing.

The network has been given the "overall winner" award with average speeds of 162.3 Mbps compared to 98.2Mbps and 93.7Mbps for AT&T and Verizon, respectively. Verizon managed to lead in terms of the maximum download speeds with 2216.7Mbps, while T-Mobile at 1134.4Mbps and AT&T stood at 1090.9Mbps. 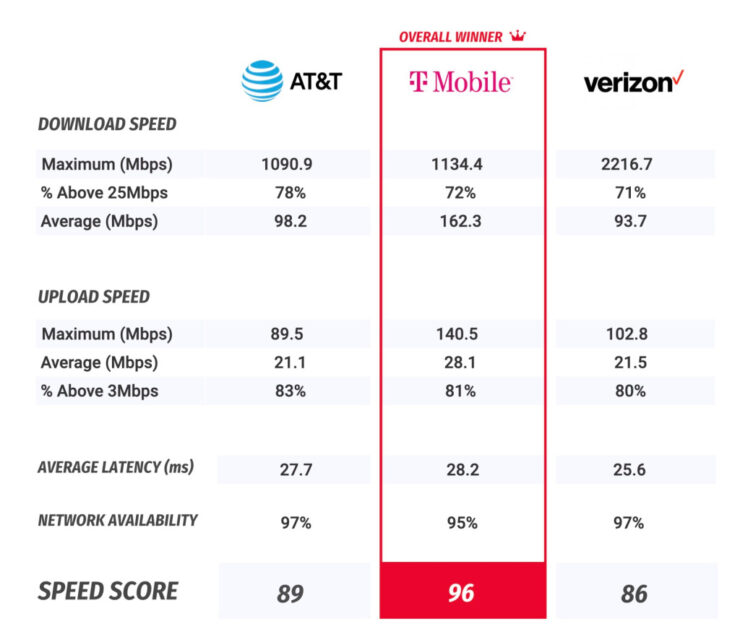 The difference between the results boils down to T-Mobiles adoption of mid-band 5G.

To put it simply, T-Mobile was behind the competition when using 4G and low-band 5G. Then mid-band completely changed the game, just in the past year.

Even in the cities it covers, T-Mobile 5G isn’t everywhere. But it covers enough area in those cities to make a real difference, and coverage is improving every month. This chart shows how often our T-Mobile 5G phone made use of 5G in each of the cities and regions we tested—from 90% of the time in Chicago down to only 36% in New Orleans. (But T-Mobile still won in New Orleans, because 5G is generally sparse there.)

For those interested, you can check the full study here. Let us know if you think this victory was well deserved.