After making you work your fingers work to the bone with painful achievements on the PC and XBOX 360 Team Mate is taking their meat to a new frontier, while the idea of a mobile version was probably not in the head of Team Meat upon the games release it certainly seems that they have come around and realized that maybe Meat Boy on a handheld iOS device might not be the worst idea after all, And no this is definitely NOT an April Fool’s Joke. 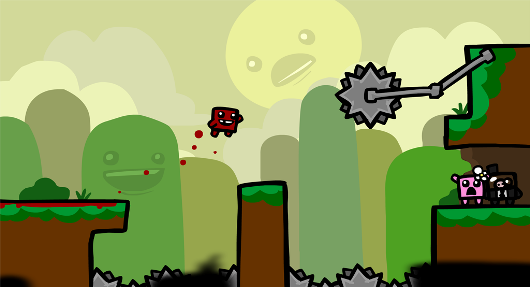 The above screen is the only screen and probably a very early look (but will be changed A LOT) upon its release) at an early version of Super Meat Boy for the iOS platform, the good news is that the game will have no relation to the story of the PC / XBOX version of the game and Edmund McMillen has also confirmed that the controls will be perfect and not your typical controls. The game will come with its own sound, art, story and possibly more.

For those of you who have not heard of Super Meat Boy all you need to know is that this is an unforgiving indie platformer game; the game is well known for being merciless, brutal and the difficulty of levels rises with each chapter, and with tons of end game content such as dark worlds which are even more difficult you are definitely in for some of the most finger crunching hours of your life as timing, precision and patience are key in this game and for it to come on the iDevice is not only dangerous to the owner but can result in stories of people throwing their iPhones, iPad’s and iPod Touch’s in rage might start popping up soon after the release of this game on the iOS if the games difficulty level carries on with it.

For now I hope that the game does come to the iOS because the Apple Store truly needs something as punishing as this and I could really use a break from playing Angry Birds in Space.