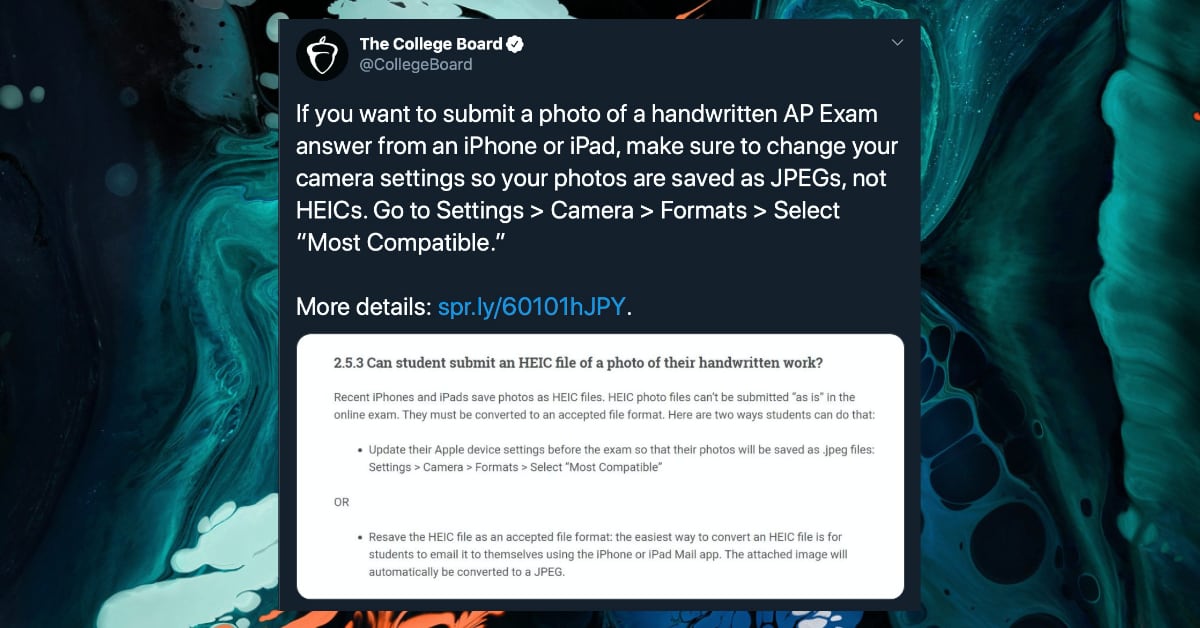 In a bizarre turn of events, it is being reported that students are failing Advanced Placement (AP) tests because they are unable to upload photos of their responses captured using iPhones in HEIC image format. The College Board website only supports JPG, JPEG, and PNG image formats, so anyone who tries to upload an HEIC format image is unable to submit their answers.

The College Board website specifically lists the supported file formats, however, many users seem to be unaware of the setting on their iPhone which is used to capture photos. As per The Verge:

But the testing portal doesn’t support the default format on iOS devices and some newer Android phones, HEIC files. HEIC files are smaller than JPEGs and other formats, thus allowing you to store a lot more photos on an iPhone. Basically, only Apple (and, more recently, Samsung) use the HEIC format — most other websites and platforms don’t support it. Even popular Silicon Valley-based services, such as Slack, don’t treat HEICs the same way as standard JPEGs.

In a statement shared by College Board with The Verge, it is reported that only less than 1% of the students were unable to submit their results, which means that a majority of iPhone users, as there are many in that age range who take AP tests, were able to successfully submit their results.

The College Board had to send out an email to students notifying them of the image format issue, and also tweeted a guidance message so that students can change the default format to 'most compatible' on their iPhones.

If you want to submit a photo of a handwritten AP Exam answer from an iPhone or iPad, make sure to change your camera settings so your photos are saved as JPEGs, not HEICs. Go to Settings > Camera > Formats > Select “Most Compatible.”

HEIC, the container that supports HEIF, short for High Efficiency Image File Format, is popularly used on iPhone, iPad and macOS since 2017. It provides higher image quality than JPEG, at almost half the file size. iOS usually converts images to JPEG whenever you try to upload an image using Safari, or any third-party apps, for maximum compatibility. While writing this, I tested this with a few websites, as my iPhone's default setting is 'High Efficiency', and I had zero issues with uploading images anywhere as they automatically converted and uploaded in JPEG format.

For now, students who were unable to upload their answers and failed the exam will not be allowed re-submissions. However, for the future, College Board will allow users to send in their answers to an email address, if they are unable to submit on the website. This has pushed existing students to start a petition to allow re-submission of their AP work. At the time of writing, the petition already has 25,500+ signatures.