CHICAGO, Jan. 26, 2010 - SteelSeries, a leading manufacturer of game peripherals and accessories, today announced that the SteelSeries Siberia v2 Headset has been selected to participate in the 52nd Annual GRAMMY® Awards official gift bag. As the headset of choice for both gamers and music lovers, the SteelSeries Siberia v2 Headset brings GRAMMY presenters and performer's superior sound and microphone technology in a stylish and comfortable design. 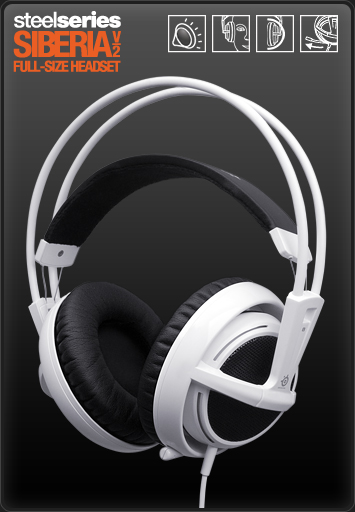 "We are honored to be selected and associated with the 52nd Annual GRAMMY Awards and provide our signature Siberia line of audio headsets to presenters and performers in the legendary GRAMMY Gift Bag," said Bruce Hawver, SteelSeries CEO. "SteelSeries customers are power users who demand outstanding audio, and we pride ourselves on providing an unparalleled experience to them whether they're dominating their opponent on PC or Xbox 360, chatting on VoIP or mixing and listening to music."

The SteelSeries Siberia v2 Headsets feature 50mm speakers that amplify the bass and overall volume along with the frequency response of 10-28,000 Hz. Optimized for professional gaming as well as for music, the headset features a crystal clear soundscape for high, low, and mid-tones as well as thick leather ear-cups for sound isolation. The SteelSeries Siberia v2 is lightweight while its trademark headband suspension construction makes it extremely comfortable for use over long periods of time.

The 52nd Annual GRAMMY Awards will be held on Sunday, Jan. 31 at STAPLES Center in Los Angeles and broadcast live on CBS at 8 p.m. ET/PT. Check out the SteelSeries Siberia v2 Headset Bundle at http://steelseries.com/grammys.