Review bombing has become a common occurrence in the last few months on Steam. In case you're not familiar with this phenomenon, what happens is that a portion of a game's player base suddenly decides to change their user review of the game on Steam from positive to negative, in an attempt to harm the developers.

The causes for review bombing can be extremely varied. The most obvious ones could be a disappointing update, expansion or DLC, a sudden price increase (this happened to various Paradox Interactive titles and We Happy Few), the addition of micro-transactions and/or loot box systems (recently, this happened with PLAYERUNKNOWN's Battlegrounds). But review bombing can also occur simply because of something the developers have said or done outside of the game itself.

For example, Campo Santo's Firewatch received plenty of negative reviews after their decision to file a DMCA against YouTuber PewDiePie because of his now infamous racist comment.

Clearly, this doesn't have anything to do with Firewatch, though, and it could very well mislead potential customers. Now, Steam decided to do something about these cases.

In fact, by going on any store page you'll now notice histograms of the positive/negative ratio of user reviews since that game was launched. Valve's Alden Kroll wrote:

As a potential purchaser, it's easy to spot temporary distortions in the reviews, to investigate why that distortion occurred, and decide for yourself whether it's something you care about. This approach has the advantage of never preventing anyone from submitting a review, but does require slightly more effort on the part of potential purchasers.

It also has the benefit of allowing you to see how a game's reviews have evolved over time, which is great for games that are operating as services. One subtlety that's not obvious at first is that most games slowly trend downwards over time, even if they haven't changed in any way. We think this makes sense when you realize that, generally speaking, earlier purchasers of a game are more likely to enjoy it than later purchasers. In the pool of players who are interested in a game, the ones who are more confident that they'll like the game will buy it first, so as time goes on the potential purchasers left are less and less certain that they'll like the game. So if you see a game's reviews trending up over time, it may be an even more powerful statement about the quality of work its developers are doing.

Let's take a look at a quick example. Bluehole's PLAYERUNKNOWN's Battlegrounds received a relatively brief shot of review bombing between August 23rd and 24th, which is when the cosmetic micro-transactions were added to the game. You then have the option to exclude reviews during that time period or focus exclusively on those in order to better understand them. 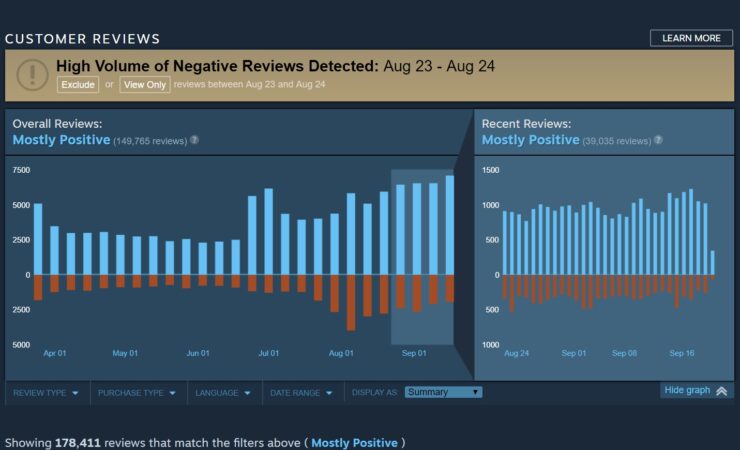 This does look like an improvement, though as Valve pointed out this feature might not be immediately apparent to all customers. We'll see whether any further changes will be made to address review bombing.

What do you think about these new histograms?