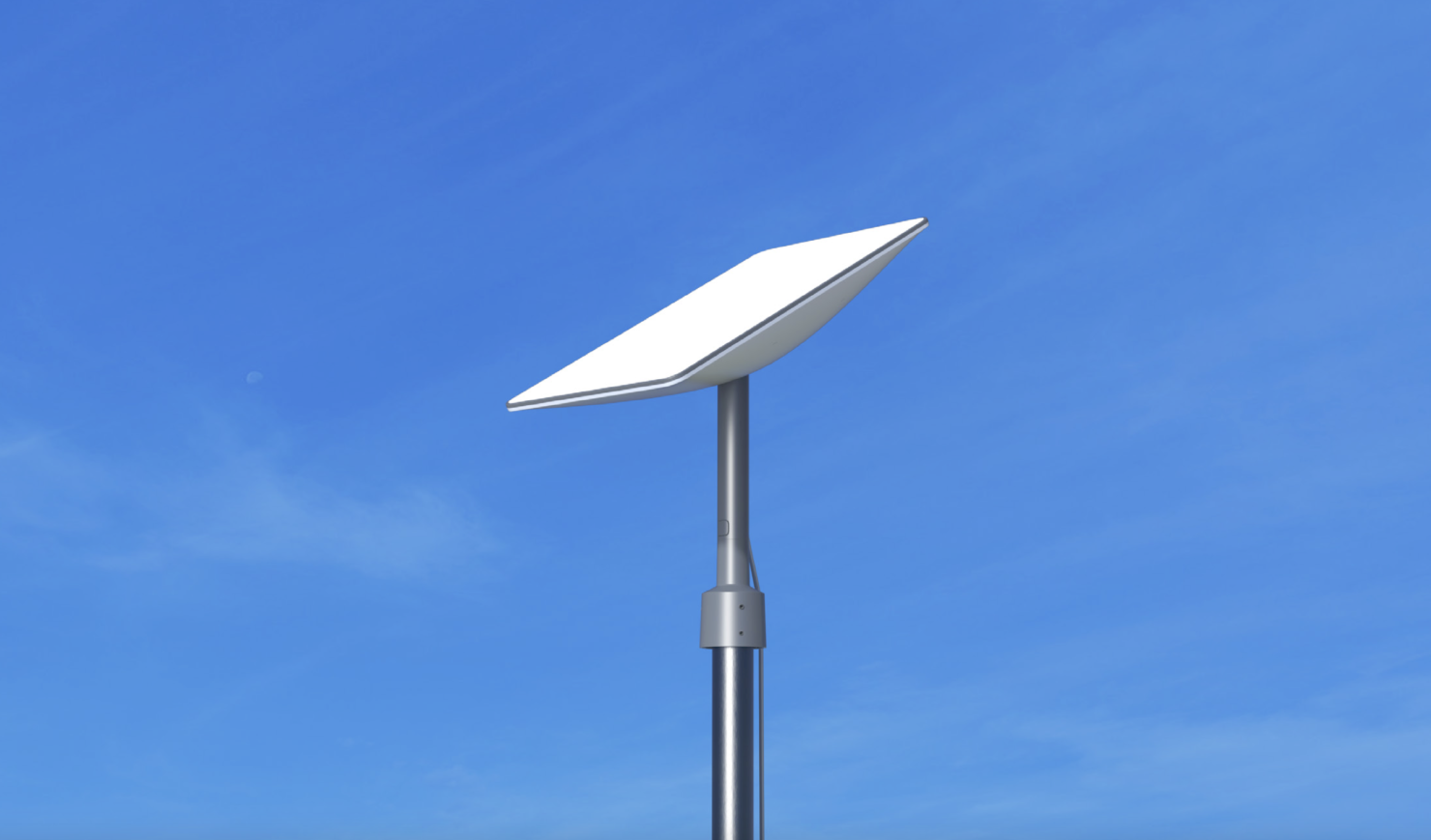 Space Exploration Technologies Corporation (SpaceX) has responded to safety concerns raised about its Starlink satellite internet constellation. Starlink is currently embroiled in a battle at the Federal Communications Commission (FCC), where its competitors are requesting the Commission to deny an application to use SpaceX's Starship next-generation launch vehicle system for launches instead of the operational Falcon 9 lineup. These have seen complaints that have targeted safety and early mover advantage for Starlink and the National Aeronautics and Space Administration (NASA) joined the discussion when it asked Starlink to share data for satellite safety and chided the company for assuming no collision risk.

In its response, Starlink has shared key details about its constellation, its policies for avoiding orbital debris, satellite design and the number of maneuvers performed for collision avoidance. The company also outlined that its collision avoidance mechanisms have been reviewed by NASA and that it also regularly shares data with multiple stakeholders.

In a letter submitted to the FCC via the National Telecommunications and Information Administration (NTIA), NASA had stated earlier this year that given the number of satellites that Starlink plans to put into orbit, the risk of in-orbit collision with other constellations can never be zero and that SpaceX should conduct an analysis of its collision assessments and then share the data with the space agency.

While Starlink's response, posted on the SpaceX website late last month, does not explicitly mention NASA or the FCC proceeding, it is centered around highlighting the efforts made by the company towards minimizing collisions and boosting space safety.

It starts out by requesting other operators to also share their data with regulators and the public to create a transparent environment, and then proceeds to highlight several strategies that are in place to ensure a minimal or zero amount of debris is generated through Starlink.

SpaceX also outlines that not only are its satellites designed to quickly deorbit in case they stop responding, but that it also de-orbits satellites that are "at risk of becoming non-maneuverable to prevent dead satellites from accumulating in orbit." This results in the company losing more satellites than it would otherwise since the spacecraft is functional at the time they are removed from orbit. 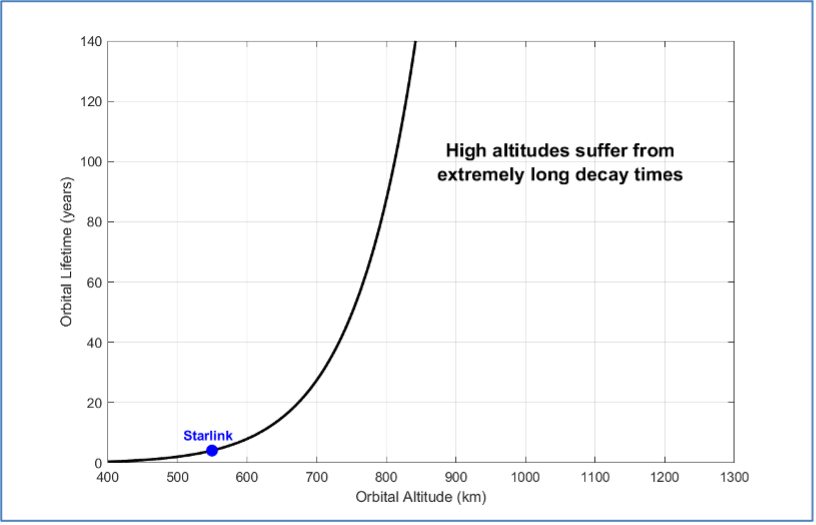 A graph shared by Starlink outlining how low altitudes result in a safer space environment.

Starlink says that it is the only company in the world that has designed its satellites to disintegrate in the Earth's atmosphere in case of failure and that it has made significant investments to ensure this outcome. This has required design decisions such as aluminum tanks for the satellite fuel systems instead of the traditional composite overwrap structures since the latter do not easily 'burn up' in the Earth's atmosphere. Through this design, it has de-orbited more than 200 satellites revealed Starlink.

SpaceX also pointed out that its failed satellites are designed to deorbit within six years - a threshold that is significantly lower than the FCC's requirement of 25 years. It also shares satellite health data such as operational status and number of maneuvers performed to reduce collision risks regulatory with the Commission. This data sharing is an industry first according to Starlink, and it believes that other operators should follow suit.

Sharing details about its autonomous collision avoidance system, which had also been addressed by NASA in its letter, SpaceX stated that:

If there is a greater than 1/100,000 probability of collision (10x lower than the industry standard of 1/10,000) for a conjunction, satellites will plan avoidance maneuvers. When planning a maneuver for any conjunction, the satellites take care to avoid inadvertently increasing risk for other conjunctions above the same threshold. 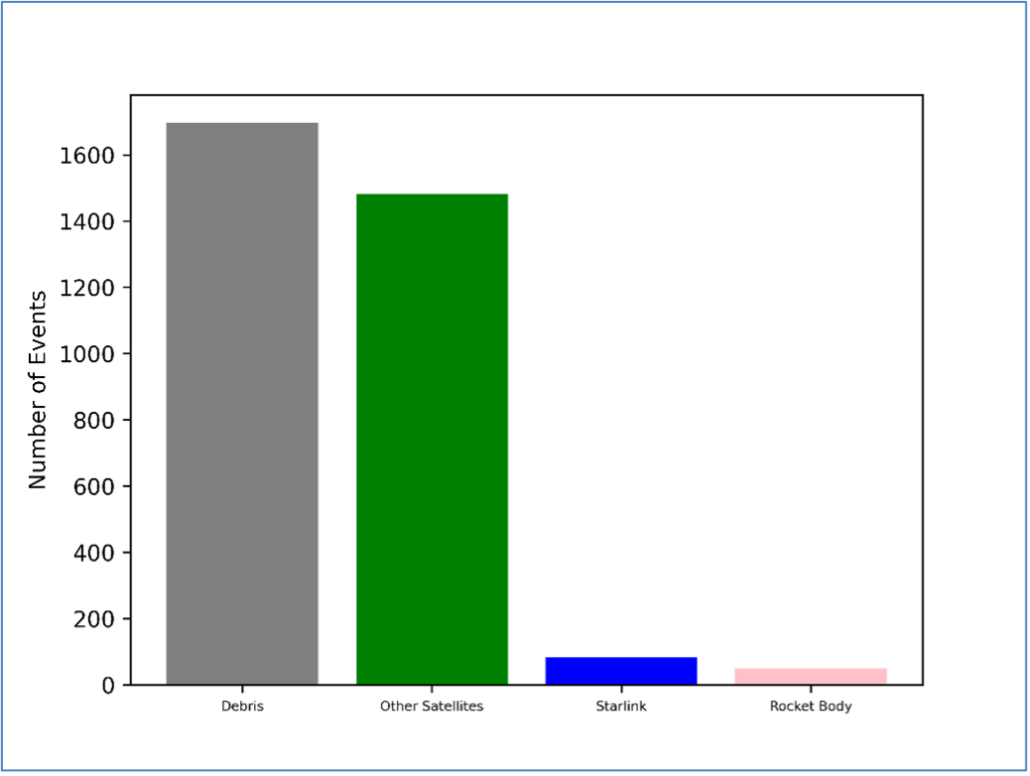 The number of maneuvers Starlink conducted between June and November 2021 to reduce the risk of collision.

Another concern raised by NASA was the risk of inter-constellation collisions since other companies also plan to launch and operate their satellite internet constellations soon. On this front, Starlink mentioned coordinating with other operators and outlined that:

It also shared a key safety feature called 'ducking' through which the satellites retract their solar panels to take a flat shape. This reduces their surface area, and according to SpaceX, reduces the collision probability by another four to ten times. Another safety feature on the satellites is the presence of a Whipple shield, which is also used onboard the International Space Station (ISS) and protects key components on the Starlink satellites.

Other safety features on the spacecraft include a low-profile chassis and failure nodes designed to reduce debris should a collision take place. SpaceX also revealed that it can manufacture as many as 45 Starlink satellites in a week. 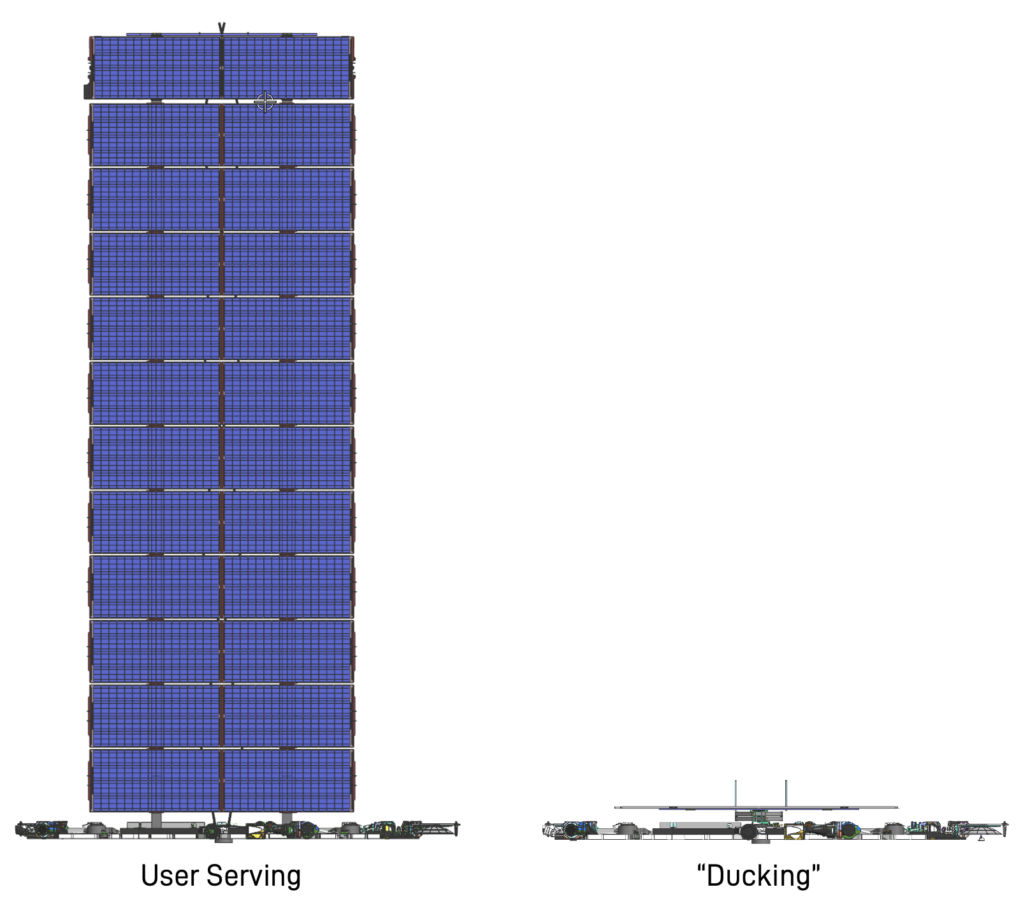 The Starlink satellite before and after 'ducking' according to a SpaceX illustration.

Finally, SpaceX implicitly addressed some of NASA's concerns about the agency's missions and assets being affected by the large number of satellites that it plans to place into orbit.

In the company's own words:

SpaceX’s collision avoidance system has been thoroughly reviewed by NASA’s Conjunction Assessment and Risk Analysis (CARA) program under a Space Act Agreement (SAA) with NASA, and per the SAA, NASA relies on it to avoid collisions with NASA science spacecraft.

SpaceX satellites’ flight paths are designed to avoid inhabited space stations like the International Space Station (ISS) and the Chinese Space Station Tiangong by a wide margin. We work directly with NASA and receive ISS maneuver plans to stay clear of their current and planned trajectory including burns. China does not publish planned maneuvers, but we still make every effort to avoid their station with ISS-equivalent clearance based on publicly available ephemerides [satellite position and velocity data].

Taking the lead in stressing the importance of data sharing for space safety, Starlink concluded by asking all concerned parties to share data with the United States Space Force's 18th Space Squadron and others to reduce the risk of untoward events taking place.