EA and Lucasfilm have dropped a new trailer for Star Wars Jedi: Fallen Order, which sheds some intriguing new light on the game’s story. The Empire is looking to wipe out all traces of the Jedi Order, and our hero Cal Kestis is searching for something “very precious to the Empire,” which I’m guessing might help bring the Jedi back. The trailer doesn’t specify exactly what Cal is looking for, but my money's on some sort of powerful Jedi relic. The trailer also gives some good screen time to Fallen Order’s main villain, the Second Sister, who looks to be a female Darth Vader type. We also see some new enemy types, a big bat-like boss, and a map showing the game’s planets (it looks like there are four in total). Check it all out, below.

Looking pretty promising! I’ll admit, I’m starting to feel some Disney Star Wars fatigue, so I’m not that excited about the story, but it looks like we’re going to get a good variety of different locales and gameplay. All I want it a fun, mostly upbeat, Star Wars adventure, and it looks like Fallen Order will deliver just that.

During today's Triple Force Friday livestream (yes, I know it’s Thursday, but the livestream was for new Star Wars goodies being released on Friday, October 4) we got a look at a variety of Star Wars Jedi: Fallen Order merch. Main character Cal will be getting an action figure, Funko Pop, and other collectibles, but the big news for gamers is that there will be Xbox One X and Xbox One S Fallen Order bundles. Each bundle comes with a console, a copy of Star Wars Jedi: Fallen Order Deluxe Edition, and one-month subscriptions to Xbox Live Gold, Xbox Game Pass, and EA Access. The Xbox One X bundle will set you back $500, while the Xbox One S bundles is $300. 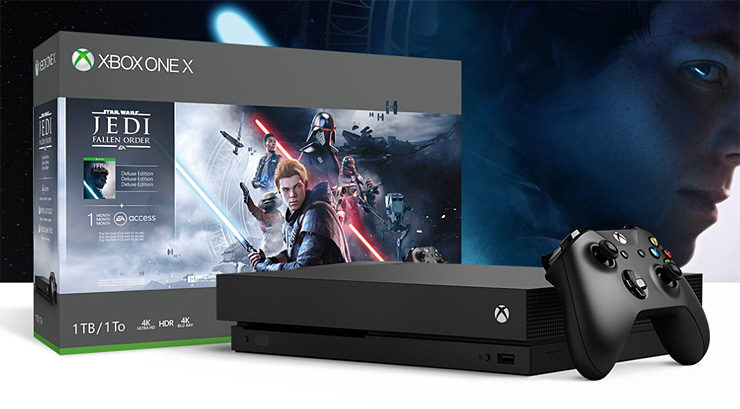 There will also be a special Limited-Edition Purge Trooper Xbox One controller. Pre-orders for that open on October 4.