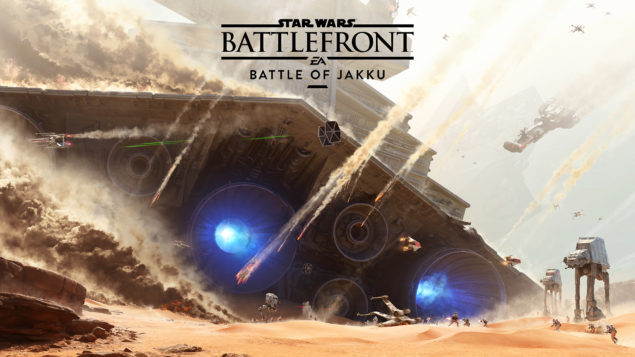 Those who pre-ordered Battlefront are eligible for the free DLC on December 1, while other game holders will be able to play the new content on December 8.

The Battle of Jakku takes place in the aftermath of the Rebel victory in the Battle of Endor, and players will experience the events that created the massive, battle-scarred landscape of Jakku shown in Star Wars: The Force Awakens.

“At the edge of the map, the Empire has constructed a make-shift base as well as smaller fortifications strewn across the landscape. Following an emergency landing, the Rebels need to locate the enemy bases to attack and take control of them all.”

What are the rules of Turning Point?

Rebels need to locate and capture one of three control points in Imperial control. The clock is ticking, but if the Rebel team succeeds with a capture additional time will be added and new control points will be available for capture. Moving through these increasingly challenging checkpoints, the ultimate goal is the Empire’s base where the final stand will take place.

What kinds of vehicles will be featured in Turning Point?

Since the starfighters are occupied in the battle above or simply destroyed, we wanted to highlight airspeeders and AT-STs in this mode. In contrast to its role in Walker Assault or Supremacy, the AT-ST is a slightly more defensive vehicle in this mode. Piloting it, you will need to move between areas a lot to meet the Rebel assault. If you’re in an airspeeder on the other hand, you’ll be on the offence, giving supportive fire to your Rebel team mates. 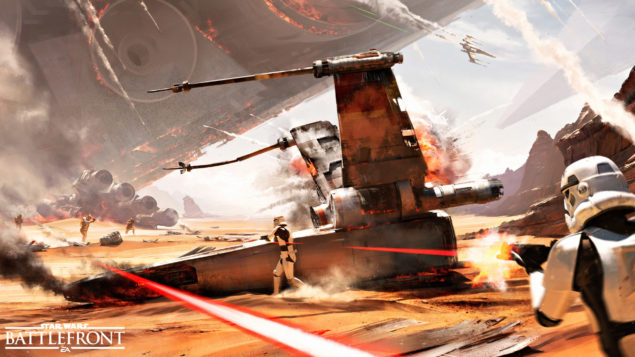 How does the chaotic battle beyond add to the overall gameplay experience?

The peripheral action on the larger map - Graveyard of Giants - is truly a great visual spectacle. The battles are ever-present; debris will be falling from the skies, and you’ll even see a Super Star Destroyer come crashing down during the round.

What will players love within Turning Point?

A Turning Point match will often be very exciting since the outcome is never sure. There are also a lot of tactical possibilities that need to be considered. For instance: once the Rebels have started taking over a control point, it can’t be reclaimed by the Empire. Let’s say there’s only 25% left of the claim process and the Empire has managed to drive away the Rebels. This means that the Empire have to choose between defending this vulnerable point or another part of the map. The Rebels in turn need to decide where their next attack should be.

Star Wars Battlefront released last week on November 17, and has been selling like hotcakes. In the UK, the game had the best launch to date for a Star Wars game. Battlefront outsold 'The Force Unleashed' by 117% in its first week.