Squadron 42, the story campaign part of Star Citizen, has been delayed to 2017.

That's the bad news, out of the way. Every little detail shared by Cloud Imperium Games is rather juicy, though. Squadron 42 (which features a stellar cast of actors including Gillian Anderson, Mark Hamill, Gary Oldman, Mark Strong, Liam Cunningham, Andy Serkis, Rhona Mitra, John Rhys-Davies and Ben Mendelsohn) is now much bigger than its original pitch.

At CitizenCon, Chris Roberts showcased the following impressive feature list. Squadron 42 will be comprised of twenty-eight chapters that translate into over sixty missions; its story arc is equivalent to 1255 pages of dialogue; there will be 340 speaking roles that have all been subject to facial scanning and motion capture, and performance capture now exceeded twenty hours. 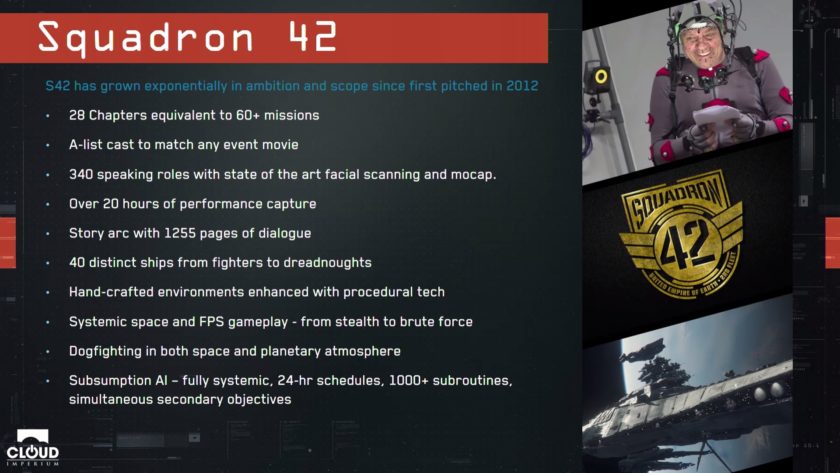 Roberts then showcased an impressive gameplay demonstration of Star Citizen Alpha 3.0. Apparently, the development team managed to create a technology that allows for unlimited draw distance while planets can be procedurally generated at scale.

Roberts added that they wanted Crysis-like quality on the ground, which was very hard to accomplish as most games powered by CRYENGINE (or any other commercial engine) are much more limited in scope.

As for the next few updates, 2.6 will have "totally refactored" lobby and leaderboards. Update 3.0 is set to roll out the Stanton System as well as adding basic professions like bounty hunter, mercenary, piracy and smuggling, cargo transport and trading.

3.1 will be dedicated to mining and refining while also adding escort missions. 3.2 is scheduled to add repair & salvage as well as covert operations for the mercenary profession, while 3.3 will introduce farming and rescue missions.

Finally, Update 4.0 is set to unlock the ability to travel to multiple Star systems while adding professions like exploration and discovery and science and research. You can now review the full presentation here if you want to, by the way.

Just to end with something extra sweet, Cloud Imperium shared with the press some new, stunning screenshots from Star Citizen. Enjoy!