The Social Module was show off at Gamescom this year to a very enthusiastic crowd in Cologne Germany. It's a showcase of a lot of the work being done to integrate a living dynamic world. It's also a first step towards creating the beginnings of a persistent universe capable of tying together the thus far disparate modules that have been available in the past. And now it's been released for all backers to play.

Footage captured is courtesy of Pi Operations, a player made organization within Star Citizen.

Star Citizen Social Module is more than meets the eye, and is a glimpse of what the future holds.

The Social Module allows you to select from any of half a dozen character configurations and explore the first of many planetary landing zones, called ArcCorp’s Area 18 with up to 24 other players.

At first glance such a module might seem a waste of time for the developers to simply release at such a state. We get to walk around a small part of a virtual city and enter a few shops, but that seems to be the limit at the moment. Looking at it from that perspective would downplay the significance of it.

Tony Zurovec has explained the reason why a standalone social module such as this is an important part of the game, despite being somewhat limited initially. Even limited, it's a fantastic backdrop and a great work of art. He mentions three reasons this is being released to the public now. And this will be a key module for expanding in the future.

The first is that the social module is here for all of us to hang out in a virtual space, much like the Tower in Destiny and any multitude of town instances in other MMO's. It gives us a new social aspect while getting to enjoy a well designed and modeled city.

And aside from a virtual hang-out spot where Citizens can come together, it allows for the testing of important infrastructure so that adjustments can be made before the persistent universe is actually implemented. Stress testing is a vital part of ensuring a good experience. One would think that they should already have this done internally, but public tests can bring light to issues that could never have come up in a small internal test. The more variables that can be tested, the better it'll end up being for us the players. Specifically they're working on making sure that animations of NPC's and other players is as smooth as possible, with minimal lag between perceived movement by another party and actual movement.

The third reasons is what Zurovec is describing as the most important, being that this will provide the basic building blocks for the creation of the persistent universe. In other words it's a literal jumping off point for the rest of the Verse. As everything is added on, this will be a sort of 'starting location' for the time being.

With this release, they've outlined some of the what the future will hold for the ultimate goal of of the persistent universe. The Star Marine development team is just now able to integrate improvements on the back-end to reduce lag into the rest of the Star Citizen code, so that will have a great benefit.

Of course they want actual persistence of items, character states and everything else. So a major update to the back-end to tallow that is going to be the focus for the next update. Obviously having a large number of people in a particular server instance isn't always the smoothest of mechanisms, so that'll be expanded and upgraded to let more people play together in the social module as well. We'll also see an increase in the amount of city that can be explored, and eventually more locales as well. Essentially, the locus will be on under the hood changes to improve the experience.

With that persistence comes working shops and inventories that can actually be used. Spend that in-game currency on items you need, upgrade those ships or even start buying ships with that currency. And of course we'll see many great improvements to the mobiGlas augmented reality interface to be able to properly take advantage of all the great shopping opportunities in Area 18. 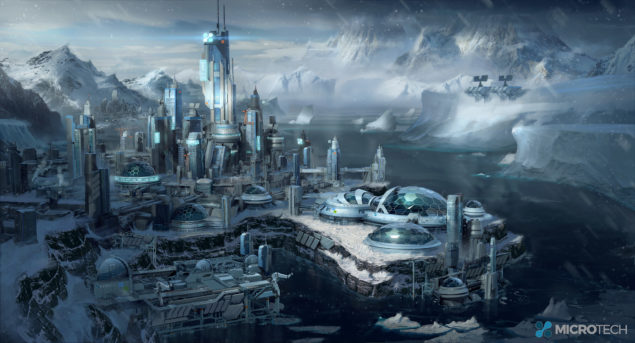 New areas coming in the future too.

Even better though, Zurovec said that in the near future we'll have the pleasure of seeing a completely new locale from which we might even be able to conduct some missions. They have a preview video below that shows a pilot flying through the new area and landing, preparing get in on some action. Things are certainly moving along at quite the quick pace now.