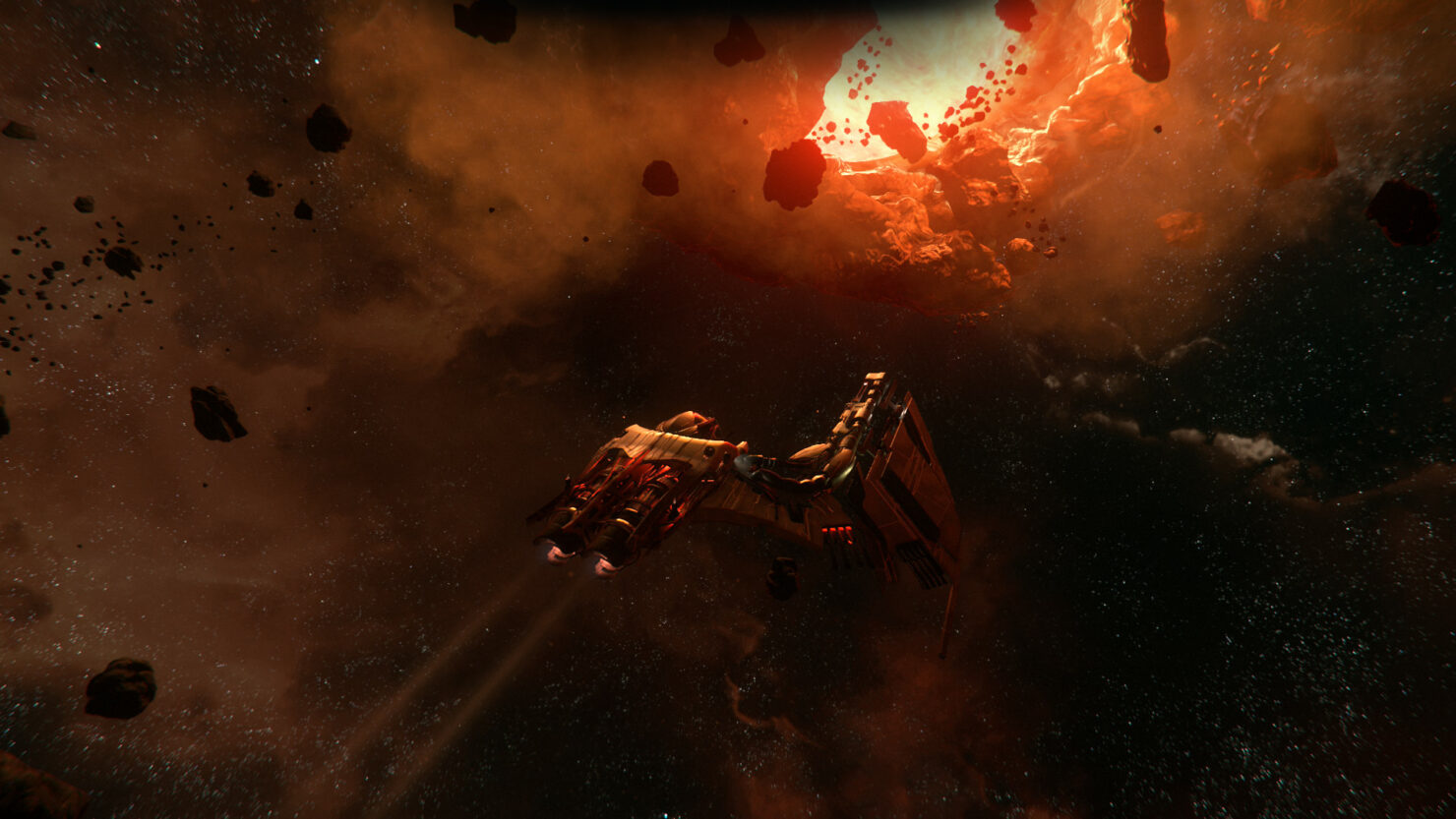 Here it is folks. Chris Roberts closing keynote from Star Citizen’s annual CitizenCon event has just mic-dropped and mind blown everyone. Pyro is the second system coming into game which means it’s the first time we’ll require jump point mechanics as just demonstrated by Chris Roberts to a stunned audience. The system is well known as a completely chaotic and lawless pirate haven (unlike for example Spider where although it’s a pirate system, it has its own rules to keep some semblance of order). Pyro is really where everything can and does kick off. The expectation as such is that this is where players will go in the persistent universe if they wish to pursue a piracy based career. At the moment, players spawn in game in one of either two locations. Port Olisar for lawful players and Grim Hex for those with a criminal rating. One suspects that in future that may shift to Pyro.

More importantly though, Star Citizen has its first jump point in game! This is the beginning of the fulfilment of the promise that brought in a couple of million backers and over $240 million in funding (plus separate private funding) to Chris Roberts’ vision over the last 7 years. Naturally the jump sequence looks amazing. Although one of the gameplay mechanics people will be looking to long term from the Carrack will be scanning and navigating jump points, this point is already established and will allow players to traverse from the Stanton system which we have today, to Pyro and vice versa. Check out the below video for more detail on Pyro:

Details are sparse but one assumes that for the initial jump point, particularly given that the ARK Starmap shows it as existing already, no special ships or sensing/navigating equipment other than a jump drive will be needed to use the jump point. The information from the Starmap shows it as bidirectional and of medium size. Exactly what sized ships can traverse a medium sized jump point are still unclear but one would expect that all single seaters and many of the smaller and medium multi-crew ships which are in game now should be able to use it without difficulty. Larger in game ships such as the Misc Starfarer or Aegis Hammerhead may struggle.

As for the system itself, existing players may have a small sense of it given that it is currently the inspiration for one of the more beautiful maps in the Arena Commander game mode. Graphics as ever are amazing and the jump point traversal is something that longstanding fans of Chris Roberts games (yep, a lot of us grew up with Wing Commander and Privateer with jump points) have been aching for.

This does however leave open one question. The current Stanton system is already huge and traversing from one part of it to another already takes ages. If Pyro launches with more than one location just the other side of the jump point, a long-standing community [CONCERN] around how long it takes to get anywhere and do stuff in game may well become exacerbated further. Quantum travel (super-fast travel in system to cover the massive distances) already takes quite a long time and the possibility of having to spend half a day to do a trade run from Stanton to Pyro and back again may put some fans off. Here’s hoping that CIG speed up in system quantum travel from the current 0.2c.

Other than that, the game looks as amazing as ever and feels like it’s starting to take shape in a more definite form than it has existed in previously.

As many will know, CIG has been working a lot on building the two games it’s known for (Squadron 42, the traditional single player campaign style game as well as Star Citizen, the broader, online, multiplayer universe), but given that the studio started from scratch (granted, a while ago now given the kickstarter launched in 2012), they’ve also been building a lot of their own tooling. This has become evident as the game has expanded and lots of locations have been added including planets, moons, space stations and rest stops among others. A lot of this has been built using CIG’s own tooling for procedural generation around locations but CIG has taken a mixed approach with Star Citizen and the expectation is it will continue to do so with some locations being mostly procedurally generated and some being mostly hand crafted.

The latest version of the planetary tech platform is now incorporating weather and the general idea is that there will now be all different kinds of weather which will be directly affecting how your ship handles and flies in atmospheric conditions.

As expected (come on, it’s Star Citizen we’re talking about here), fidelity is always important to Chris Roberts and given the amount of work which has gone in to physically modelling spaceflight, we can probably expect things like snow storms, rain storms, winds, maybe even up to hurricanes to become a thing over time in the game and players will have to figure out how they make their way through planetary weather when the time comes and they’re on a time critical mission and have to land and deliver a package to somewhere that has disabled it’s automated landing systems due to a severe storm of some kind.

For those interested in the weather (both in game and out), this kind of new tech is going to likely make the MyRadar app a must have. MyRadar launched a collaboration with Star Citizen a couple of years ago and we got exclusive coverage yesterday of how they are now launching their own satellite into space with Star Citizen branding on it! MyRadar is a terrestrial weather app for both iOS and Android, but the CEO is a backer of the game and he incorporated in game weather into the app 2 years ago.

If you’re unfamiliar with Star Citizen, they’re having a Free Fly from tomorrow where anyone can try the game and all current ships will be available to anyone who tries it allowing people to see if combat, mining, piracy or trading feel like the right thing for you before you take the plunge. The Free Fly has a new “Welcome Hub” with tutoring and matchmaking for new players and old.

Star Citizen Free to Play for the Next 11-Days, Ships Available for Test Drives