Spy Hunter was a very under rated game on the previous generation consoles and after years of being incognito the game is making a comeback on the current generation handhelds of Sony's PlayStation Vita and Nintendo's 3DS. While the game was released way back in 2001 it was still a pretty decent game for its time and the series never saw a proper sequel since then, so it's good to see it return to the current generation of gaming and hopefully even lead up to a console release. 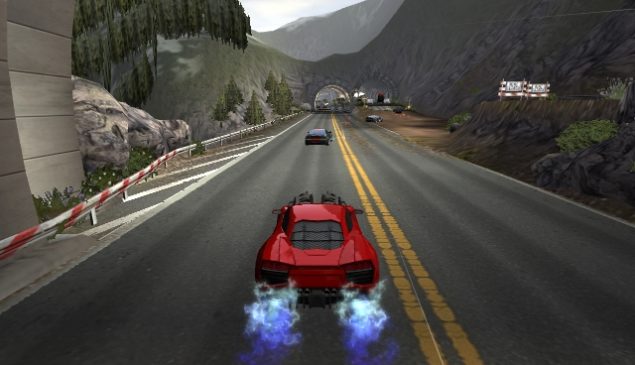 Spy Hunter is a game that has gone from 2D to 3D and then went silent and disappeared off everyone's radar among many other forgotten games of the previous generation consoles but now the game is making a come back on the two current generation handhelds for the moment but its making a triumphant return none the less. The game is being published by Warner Bros. and developed by TT Fusion and is being set for a Fall 2012 release.

You can read the full press release below:

On the eve of the franchise’s 30th anniversary since the original Spy Hunter was released to arcades in 1983, the new Spy Hunter races forward on its most thrilling and dangerous ride yet. The player once again takes on the role of the “Agent,” the driver of the high-tech G-6155 Interceptor supercar, armed extensively with advanced weaponry, and ready to take on a global terrorist organization set on world domination.

The Interceptor seamlessly transforms from supercar to off-road assault vehicle to speed boat, allowing players to go where they like within the game’s branching mission tracks. Players can choose to outfit and upgrade the Interceptor’s many weapons and high tech gadgets as they like throughout the course of the game. And for the first time, the Agent will have additional support in the form of an unmanned aerial support drone, allowing players to plan their destruction when assaulting enemy agent strongholds. Spy Hunter also features thrilling crash choreography and a camera system that follows the action in slow motion to let players savor the destruction they created.

Warner Bros. Interactive Entertainment, a division of Warner Bros. Home Entertainment Group, is a premier worldwide publisher, developer, licensor and distributor of entertainment content for the interactive space across all current and future platforms, including console, handheld and PC-based gaming for both internal and third party game titles.

SPY HUNTER © 2012 Warner Bros. Entertainment Inc. Developed by TT Fusion Ltd. All other trademarks and copyrights are the property of their respective owners. All rights reserved.