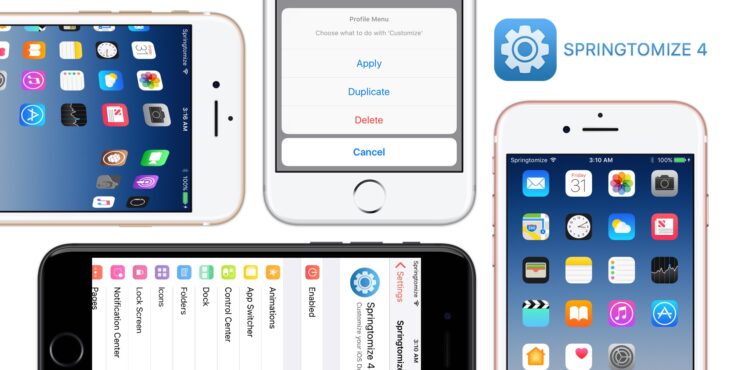 After a long and excruciating wait, you can now download Springtomize 4 for iOS 10 on your iPhone and iPad.

Some time back we broke news that a new version of Springtomize is on its way that will be tailor-made for iOS 10 devices. Today, the developers have stood fast on their promise and have released Springtomize 4 for iOS 10.

The new version of the jailbreak tweak has been made from the ground up. This means that everything has been made with Apple's latest mobile OS in mind, and you can expect a ton of speed improvements pretty much everywhere you can imagine. And of course, since this is a new release of the tweak, therefore it comes packed with an insane amount of features that will definitely keep customizers busy in the time to come.

In this new release, there's a brand new feature called 'Profiles.' And as you can already tell from its name, it lets you create a profile based on a set of customizations. If you have a profile with minimum set of changes, you can switch to that on the fly. If you have something that goes all-out in terms of the UI, then you can switch over to that profile as well. It's a slick little feature and will save time for a lot of users in order to switch between a certain look. There's a lot to play around with and we highly recommend giving the tweak a shot if you love customizing you iPhone or iPad.

The Springtomize 4 for iOS 10 tweak is available to download right from the BigBoss repo in Cydia. And since it's a brand new launch, therefore the developers are offering the tweak for a generous price of $3.99 for a limited time. After that, it'll be available for $4.99. Quite frankly, that price is absolutely justified given what the tweak offers out of the box. The possibilities are absolutely endless if you have this bad boy installed on your device.

Give the new and updated tweak a shot and let us know what you think about it in the comments section below.