[UPDATED March 3rd, 2016 @ 6:45 PM EST] Phil Spencer has just tweeted an update retracting his statement regarding PC gamers having to spend 2X what the XBOX ONE costs to play at the same resolution.

@FlaxeLaxen No and the 2x comment is wrong, my mistake. My point is from a performance/price standpoint console is a great value. 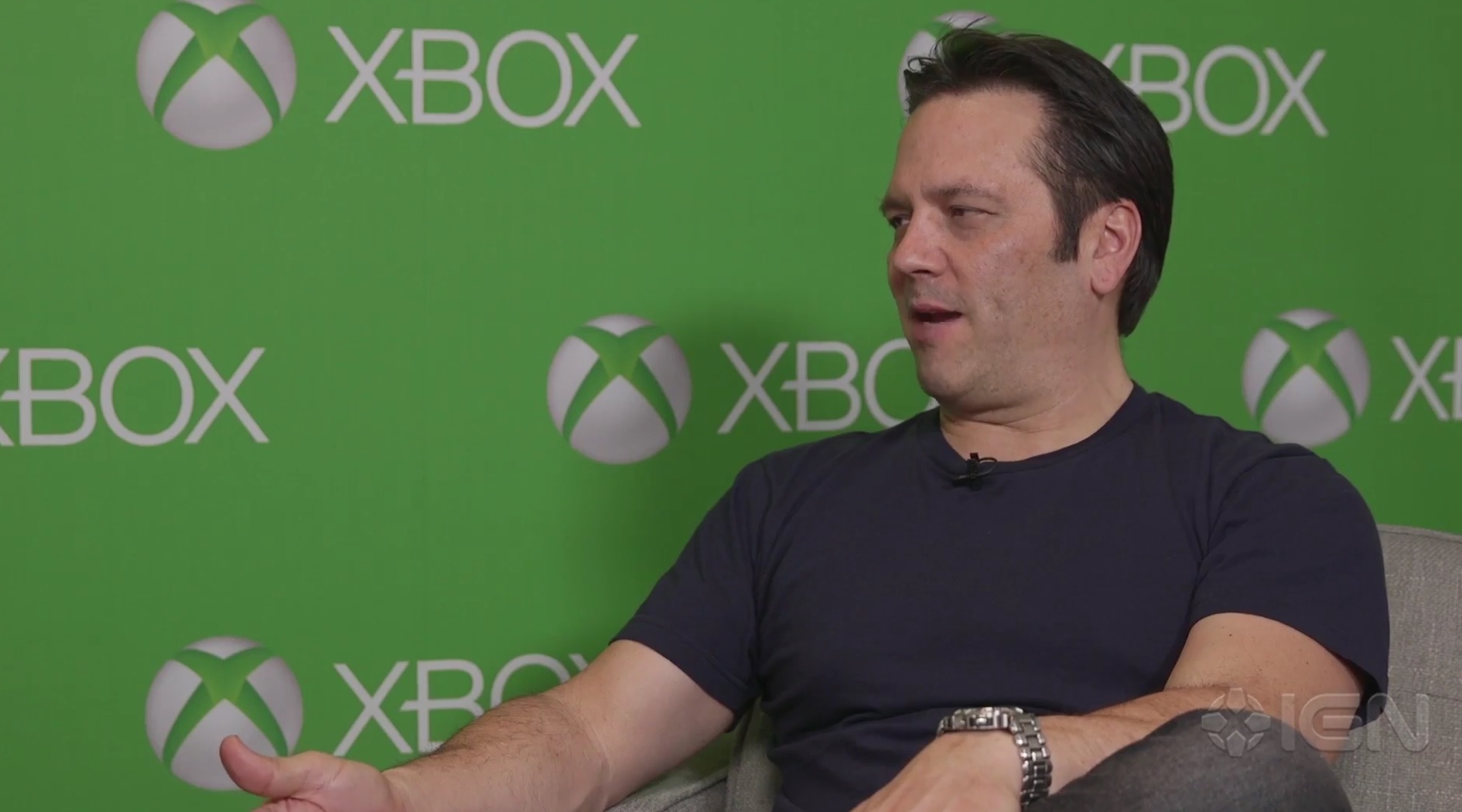 In an attempt to court PC gamers in an interview on IGN's "Unlocked" show Spencer made one of the most outrageous comments we've ever seen him make about PC gaming. I'm going to quote the entirety of his answer so our readers know nothing is being taken out of context. The question was “What do you want to say to the folks who, in light of Quantum Break coming to PC, say ‘There’s no reason to buy an Xbox One anymore if all this stuff is coming to PC?” and this is what Spencer had to say :

We think that there's a fundamental difference between a gaming experience on a PC and a gaming experience on a televesion. And there's certain either people or time that you decide I want to play in front of my television. I want XBOX ONE to be absolutely the best console gaming experience we can create. We're committed to that today and we'll be committed to that for many years. We're also Microsoft we also look at windows obviously as something that's critical to the success of the company. And frankly as us the gaming group we look at windows and we think we can actually have a positive impact on Windows 10 as a gaming platform.

The argument that people give me that "hey I'm just going to sell my XBOX ONE and play all these games on my PC" I get the emotion around that argument. Frankly from a financial standpoint, absolutely the most cost effective way to go play these games is to own an XBOX one - IGN interviewer interjects "yeah it's a $300 box" . Yeah the graphics card alone is probably 2X what the XBOX [costs] to run at a similar resolution. But we also know that people love gaming rigs and they've got them setup. So I look at that customer and absolutely I want to bring XBOX live. we're committed to bringing our biggest franchises with XBOX and windows, we've said that.

Doesn't mean necessarily that every game ends up on both platforms cause there could be some differences in just the play space and how things play. What it's going to mean for my console customers is more games to play. We're already seeing that, we're seeing more developers focusing on XBOX as the ecosystem gets bigger. So more people that they can sell their games to and can play. Means more people playing, more games under development. I think those are really strong things for the XBOX ONE community.

Here's a time-stamped link to the interview in question which will take you straight to Spencer's comment.

Lets start with one of Spencer's earliest remarks in the quote above. He said that he thinks that there's a fundamental difference between a gaming experience on a PC and a gaming experience on a television. As if they're mutually exclusive, as if PC gamers can't plug their systems into televisions and play using whatever peripheral device they wish to play with, an XBOX controller even. I'll return to this comment a bit later, but let's move over to Spencer's other eye brow raising remark.

Spencer claims that from a financial standpoint it's more cost effective to game on an XBOX ONE. He continued to say that the graphics card alone will cost twice as much as the XBOX ONE just to play on a similar resolution. Frankly, as a PC gamer I found these claims, being touted as truth, deeply outraging.  The level of ignorance that these remarks display is simply appalling. Remarks that were made by no other than the head of Microsoft's gaming platforms and the man responsible for catering to both XBOX ONE and PC gamers. A man that evidently has a deeply flawed and distorted understanding of what PC gaming is about.

Before I move on any further let me quickly dispel both claims made by Spencer ,which is going to be incredibly easy for me to do thanks to the vast body of technical data and testing that exist done by countless respected tech outlets all over the web.  Which adds even more mystery as to how Spencer would even spread such misinformation. This is the same person that has seemingly tried to build bridges with the a PC gaming community that's growing ever more disgruntled with Microsoft's disregard for their needs.

The same person that not long ago was quoted saying :

Phil Spencer speaking with PCGamer.
"I look at the work we’re doing on the platform as an enabler for us becoming relevant in PC gaming..."
"I love investing more in PC games."

Phil Spencer speaking with Gamespot
"I can tell you definitively that our team has never committed more resources to making Windows better for game developers and gamers, and that means any gamer on Windows 10, regardless of storefront or device."

Phil Spencer speaking with PCGamer
I" don’t want people to look at this as a passing fancy on our part of "can we just quickly port some console games over to PC and hope to make a little bit of money?" It’s not all about that. We are the Windows company, and ensuring that the Windows gaming ecosystem is strong is important, and that means supporting these features."

Let's examine the first claim first, that the XBOX ONE is the most cost effective solution. This one is easily refutable and we'll cite Digital Foundry's budget PC frame rate comparison to the XBOX ONE and the PS4 which you can watch here or below.  A build that features a $99 graphics card, one third what the XBOX ONE costs. We'll also cite our own budget PC build which we published last year. A build that's even more powerful than Digital Foundry's budget PC. And a build that can be made faster and cheaper today thanks to the continuous evolution in the PC hardware space.

No Mr. Spencer A GPU That Costs 2X The XBOX ONE Would Be Six Times More Powerful

Digital Foundry's video alone easily dispels the second claim as well that you need to spend twice as much as the XBOX ONE on a graphics card alone to play on a similar resolution. But we're going to entertain this notion and actually look at how $600 graphics cards that you can buy today actually fare against the XBOX ONE. In fact, we'll do one better than that. We'll go down to $500 graphics cards. For $500 today you can buy an AMD Radeon R9 Nano, an 8.19 TERAFLOP/S graphics card. That's six times more computing power than the XBOX ONE's integrated GPU which is rated at 1.31 TERAFLOP/S.

The XBOX ONE's integrated GPU is based on the "Bonaire" graphics chip from AMD. However there are several important differences between the Bonaire based graphics cards that were sold on the desktop under the R7 260X and HD 7790 brands and XBOX ONE's Bonaire. For one Bonaire features 896 GCN - Graphics Core Next - stream processors, the GPU inside the XBOX ONE has 128 units disable to improve manufacturing yields.

Secondly the console version operates at a frequency that's ~20% below the desktop version which sold at a reference clock speed of 1100Mhz.  Thirdly the console version has a tiny frame buffer that's limited to the integrated 32mb eSRAM cache. Making it significantly more complicated for developers to work with, an issue that developers have actually brought up on more than one occasion. A Pitcarin based R7 370 graphics card which you can buy today for $130 on Amazon.com not only is faster than the XBOX ONE's graphics chip, but even faster than the Playstation 4's integrated GPU.

Let's put these numbers into context and actually show you what a six fold delta in performance means. It means that a game that would normally run at 30 FPS 1080p on the XBOX ONE like Far Cry 4, an R9 Nano or equivalent card would allow you to enjoy at 5K on the PC. With five times the visual crispness and clarity.

We love it because when games get more demanding and we need more performance we can simply upgrade a part and keep going rather than end up with an obsolete box. We love it because it pushes technology, games and the entire entire industry to strive for betterness. We love it because it's ours, we mold it to be what we want it to be, we construct it in our image. It's not a one size fits all deal, it's not about what the folks at Microsoft or Sony think is best for me. It's about what I know is best for myself. Every gaming PC is unique because every gamer is unique.  The PC gaming community is one of the most welcoming, diverse, well-informed and vocal. Gaming on the PC is an experience that's all about freedom, choice and pushing the limits of what's imaginable and what's possible. It's an experience that I urge anyone and everyone who hasn't experienced to thoroughly examine.