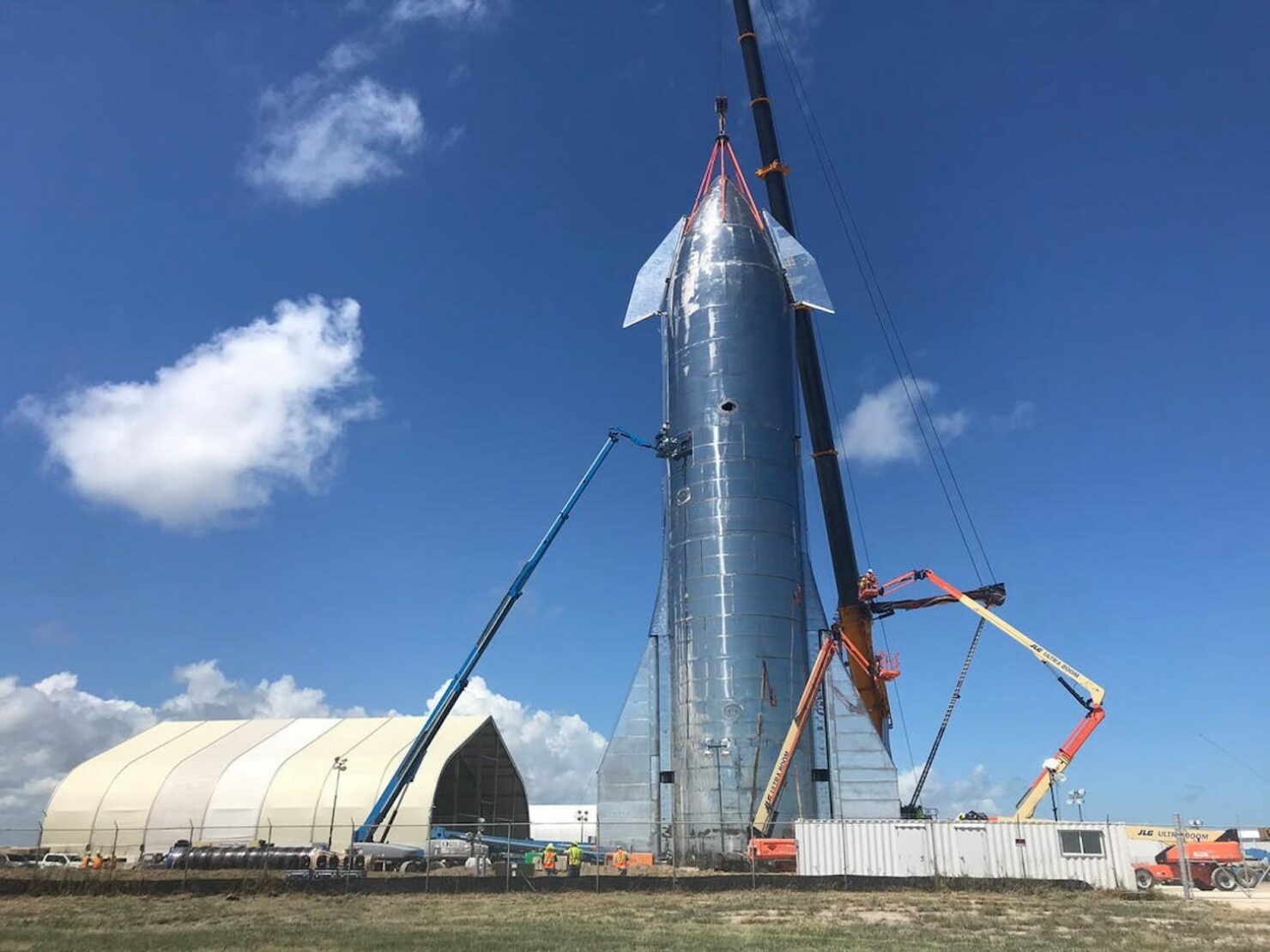 Astronautic launch service provider and equipment manufacturer Space Exploration Technologies Corp. (SpaceX) is operating on multiple fronts to expand human presence beyond earth and to aid government agencies in their resupply missions to the International Space Station (ISS). The company's Falcon 9 rocket has proven to be integral for reducing payload launch costs to the orbiting space laboratory and for resuming manned flights beyond Earth's gravity from American soil.

But while the Falcon 9 has ensured that SpaceX has been able to make a name for itself in the industry, the launch vehicle family is only one of the company's multiple vehicle lineups that intend to do a lot more than simply ferry humans to the ISS. SpaceX's long-term plans include building a launch vehicle system that is capable of taking humans to Mars and conducting sub-orbital flights aimed at reducing traveling times spend traversing the Earth's surface.

This system is dubbed Starship and it is currently under development in the company's facilities in Boca Chica, Texas. SpaceX has been edging towards conducting tests for Starship's upper stage and Super Heavy boosters, with its representatives already having engaged the Federal Communications Commission (FCC) for the system's testing frequencies at the start of this month.

Following this, SpaceX has now filed a request for Special Temporary Authority (STA) with the regulatory body that aims towards securing regulatory approval for broadcasting launch frequencies for the Starship Prototype suborbital test vehicle's communication with the company's facilities.

SpaceX's SN5 Starship prototype in Boca Chica, Texas. The SN5 prototype will soon undergo a static test fire with SpaceX's Raptor full-flow staged combustion methane-fueled rocket engine installed at the bottom. If the static fire test is successful, then the prototype will be ready for the infamous 'hop' intended to demonstrate its ability to defy gravity. The Starship prototype's medium-altitude hops as per the STA request under discussion today, will have a maximum altitude of 20 kilometers. Whether the SN5 prototype will take part in the medium-altitude hops is unknown.(Image Credit: NASASpaceFlight)

SpaceX's STA request (1041-EX-ST-2020) with the Commission follows an earlier request that the company filed in February. These requests are necessary for the company to not only conduct the suborbital flight tests for Starship but for it to communicate with the Falcon 9 launch vehicle family and the Dragon spacecraft lineup. This is due to the fact that the frequency range that SpaceX uses for its communicational purposes has primarily been assigned to federal users such as the Department of Defence (DoD) and the National Aeronautics and Space Administration(NASA).

The latest request filed yesterday reveals that SpaceX has asked the Commission to grant it this broadcast authority for a six month period that starting from the 18th of August and ending on the same date in February next year. The date of the filing is more than a month before the proposed time period of operation and given the FCC's approval history, it remains uncertain if the Commission will grant SpaceX the authority to conduct its tests before the requested time period of operation kicks in.

The STA request also reveals that SpaceX will use five antennas for communicating with the Starship Prototype suborbital test vehicle. Four of these are manufactured internally by SpaceX and the fifth is manufactured by Florida-based Myers Engineering International, Inc – which sells its antennas through antennas.us. All antennas have been termed as ''experimental'' in the request so it's likely that SpaceX and Myers have co-ordinated closely to finetune the products for their use on the Starship prototypes.  This customization is common across SpaceX's products, with the Dragon 2 vehicle that is currently docked with the ISS also featuring a custom emergency response beacon manufactured by a European firm. 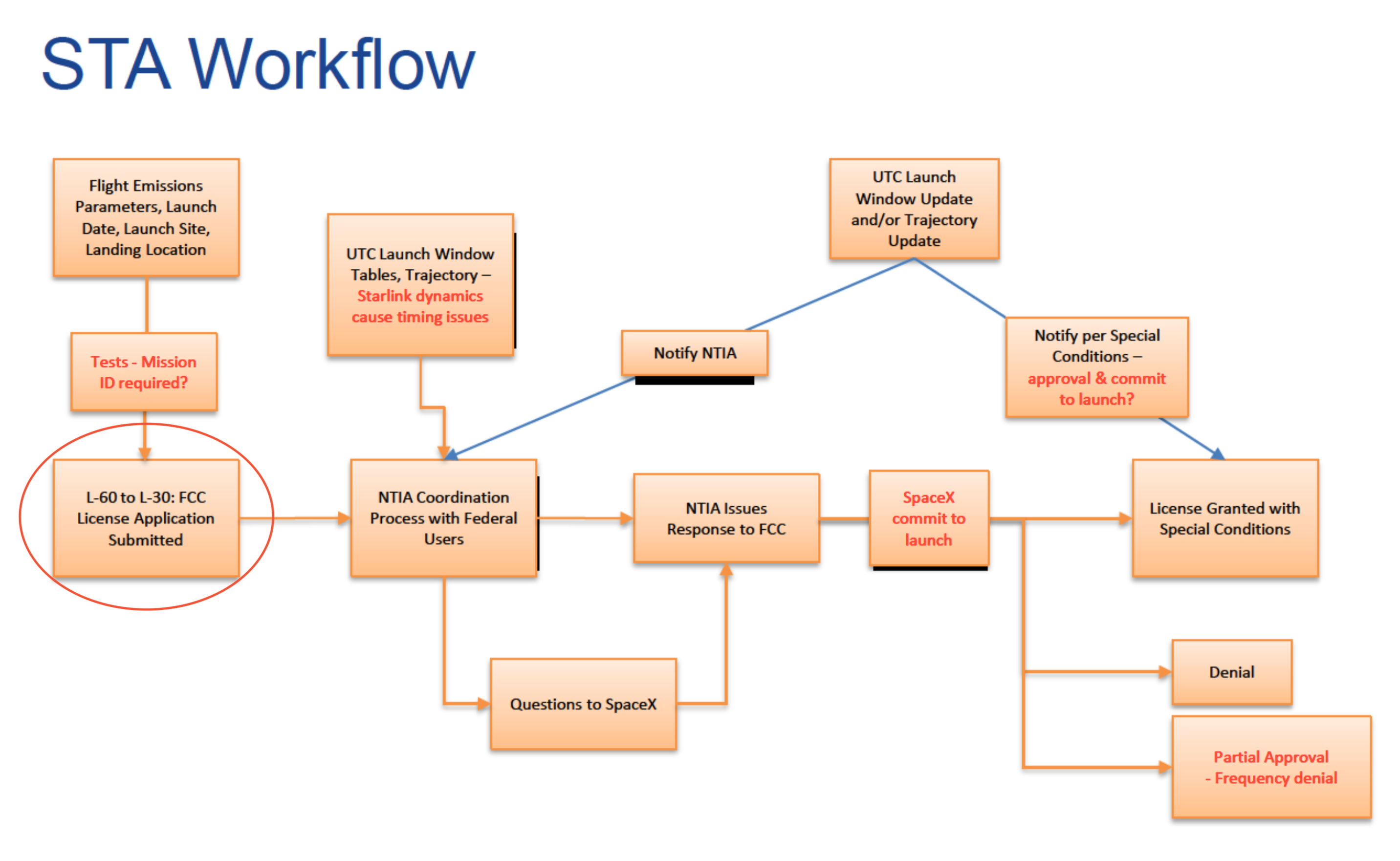 Following SpaceX's filing of an STA with the FCC (circled in Red by Wccftech above), the Commission coordinates with the National Telecommunications and Information (NTIA) for ensuring that the proposed timeline of federal frequency use does not affect government agencies. (Image Credit: SpaceX)

Testing frequencies mentioned in the STA mirror those that SpaceX intends to use on the Starship launch vehicle's upper stage that will carry cargo and crew in the future. These frequencies were the center of discussion between SpaceX and FCC representatives as highlighted above, and these have been replicated numeric-by-numeric in the STA request – indicating that SpaceX is in the final stages of the Starship upper stage's initial batch of tests.

SpaceX will use the same frequencies, which are part of the 2200 Mhz - 2290 MHz band, for the Starship Prototype suborbital test vehicle as it does for its Falcon 9 launch vehicle family. As opposed to this, the launch system's Super Heavy booster uses three frequencies in the 2360 MHz - 2395 MHz spectrum. This spectrum is used primarily for launch vehicle testing. Similar frequencies have also been assigned to the Falcon Heavy's non-primary boosters raising questions about the vehicle's developmental stages.

As SpaceX moves forward with Starship's development, the company is also busy with testing the Dragon 2 spacecraft for NASA's Crew-1 mission. This mission will officially kick off commercial flights to the ISS, and the Falcon 9 booster that will lift the Dragon to the skies arrived at the space agency's facilities in Florida earlier this week – where it will undergo preflight preparations in SpaceX's facilities in the Cape Canaveral Air Force Base.