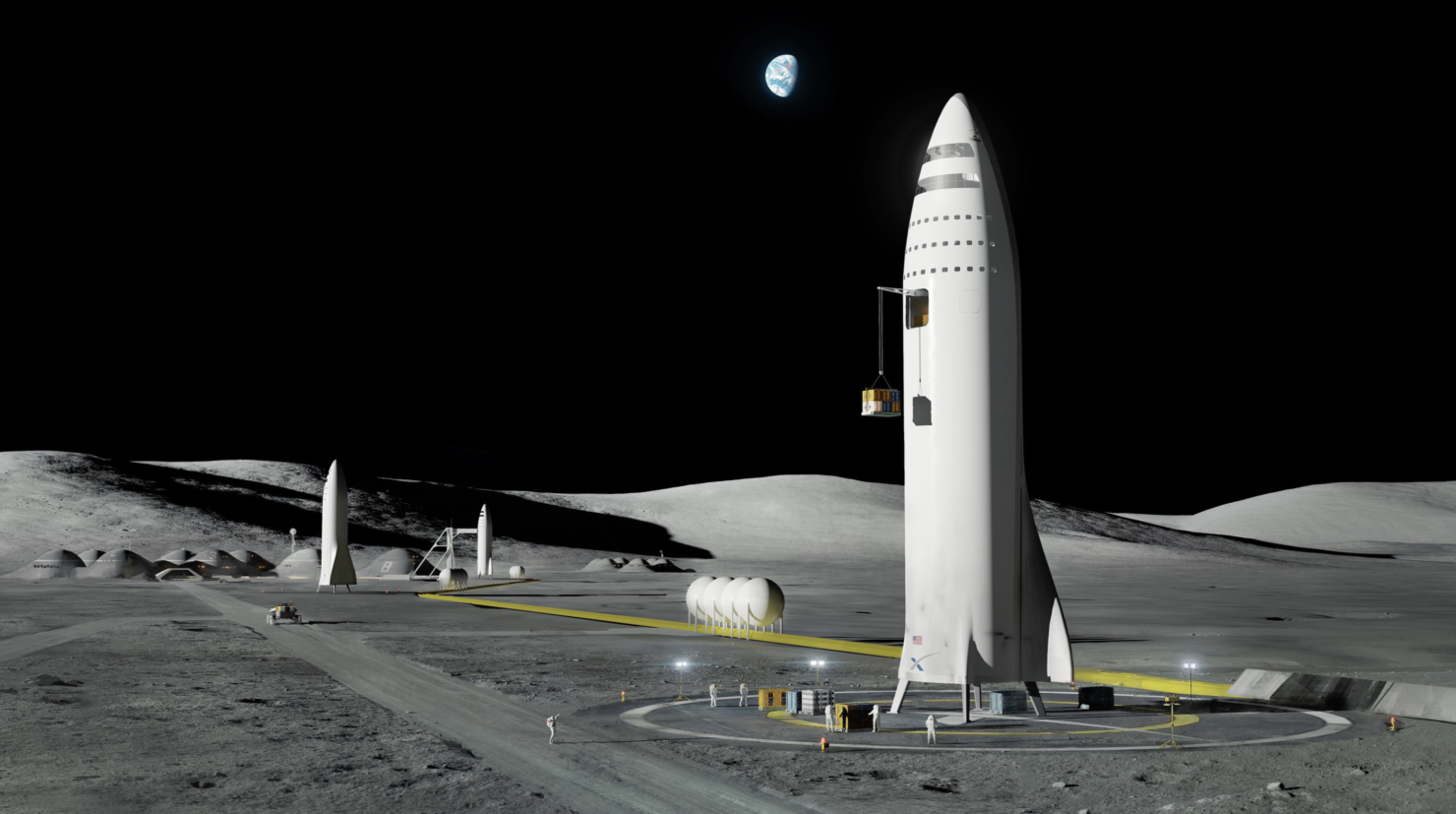 A render of SpaceX's Starship moon lander showing its final form. The lunar variants will not incorporate forward flaps and differ from other Starship upper stage variants. (Image: SpaceX)

As the world focuses on the launch of NASA astronauts from Florida tomorrow as part of the space agency and aerospace service provider and manufacturer SpaceX's collaboration under the Commercial Crew Program, astute industry watchers are well aware that the Dragon 2 vehicle ferrying the astronauts to the International Space Station (ISS) is a small part of both parties' objectives of deep space exploration.

Crucial to future journeys to the Moon are heavy-lift vehicles that will form the backbone of sending supplies to any future lunar outpost. To that end, SpaceX has already developed the Falcon Heavy launch vehicle by using more of the Falcon lineup's Merlin engines for increasing thrust. Succeeding the Heavy (and potentially the Dragon 2) is the company's Starship launch vehicle system comprising of a new launch vehicle powered by a next-generation Raptor engines and a second stage that SpaceX intends to market as a human landing system for NASA's Artemis missions.

To that end, SpaceX was granted a Commercial Space Transportation License by the Federal Aviation Agency yesterday, and the filing reveals that launching such vehicles suborbitally (even if it's for testing 'hops') has become riskier. ($100,000)

NASA's contract award equalling roughly $1 billion to three companies earlier this month for developing lunar landing systems pushed Starship into the spotlight. SpaceX has big plans for the second stage also dubbed 'Starship'. Not only does the company hope Starship to carry astronauts to the moon, but it also intends for it to offer suborbital flights that drastically reduce travel time and take humans to Mars.

While these plans are ambitious and reflect the company's forward-thinking approach that has enabled it to severely cost cut traditional orbital launch service providers, the fact still remains that Starship is far from being ready. And in the vehicle's development process, the FAA license, valid for two years, marks an important milestone as it allows SpaceX to conduction demonstrative hops of Starship – and thus verify that the vehicle is capable of takeoff and landing. 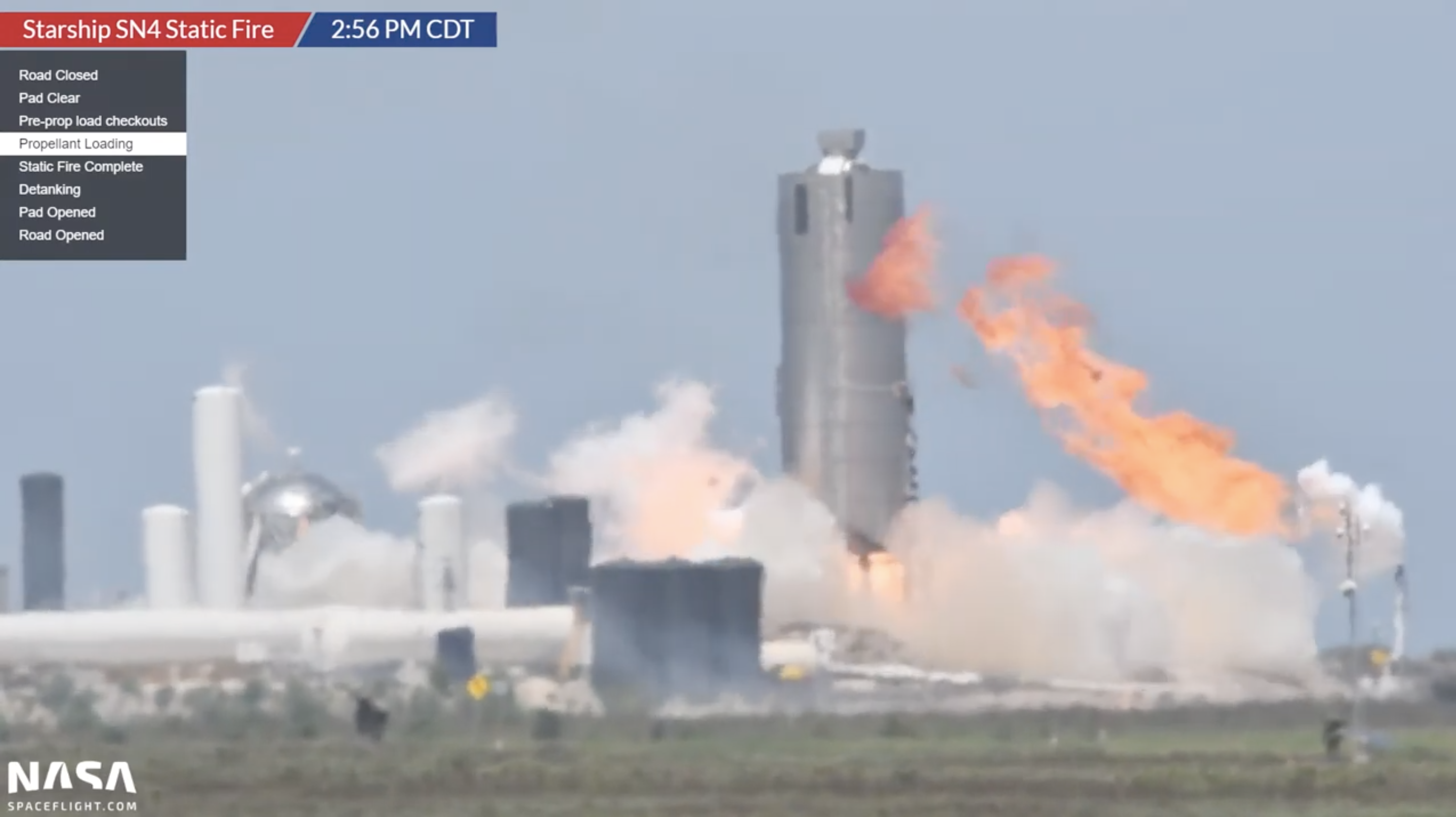 Additionally, the license also shows that launch liability insurance requirements for SpaceX, which the company has to meet for receiving FAA license, have increased twofold this time around. As per the details, the company is required to maintain insurance policies covering $300 million for Starships pre-launch activities and policies covering $198 million for covering claims that result from the Starship prototype suborbital flight testing from Boca Chica, Texas. Previously, insurance policy requirements for suborbital flight testing were set at $100 million.

By demonstrating that the Starship is capable of sustaining flight hops, SpaceX will assuage NASA and investor concerns for the project's practical viability. The Starship vehicle will be powered by six Raptor engines that will succeed SpaceX's Merlin engines currently used on the Falcon 9 and Heavy products. The Raptor will prove to be critical in ensuring that the Hawthorne, California-based manufacturer is capable of keeping up with competitors such as Blue Origin and Aerojet Rocketdyne (NASDAQ:AJRD)when providing adequate thrust for future beyond-low-earth-orbit projects.

The last flight test of a Raptor engine occurred last year when SpaceX tested the Starship second stage's 'Starhopper' prototype for an FAA-approved 150-meter test hop using only one engine. As SpaceX refines the Starship's manufacturing and design, the company will once again have propelled itself at the forefront of meeting NASA requirements for a critical project. This will prove beneficial especially as the space agency chose to remove aerospace giant Boeing (NYSE:BA) from being able to provide lunar human landers earlier this year – a decision that some speculate might be linked with NASA's head of human spaceflight Doug Loverro's surprise resignation prior to the Dragon DM-2 mission earlier this month.