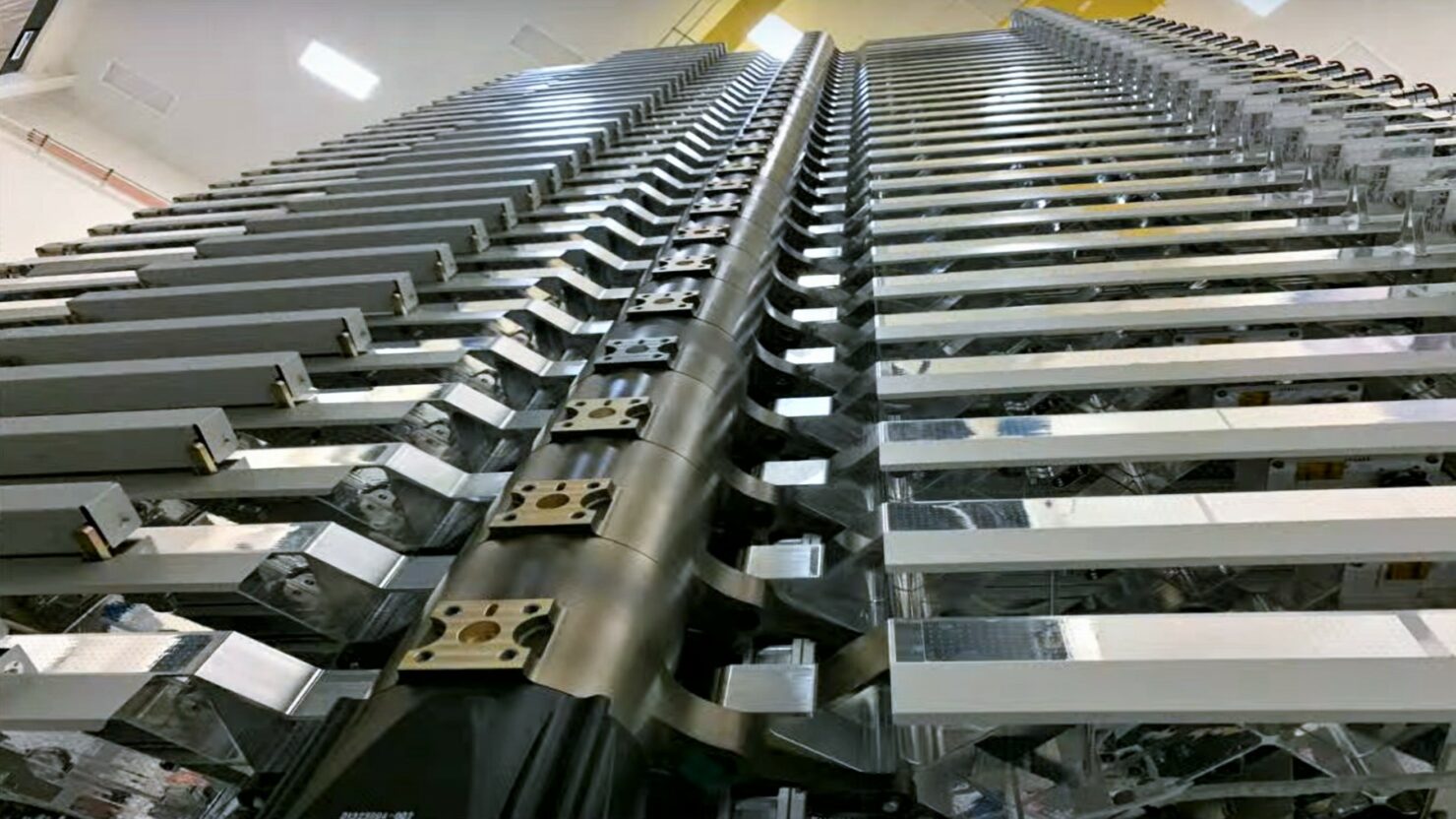 Astronautic launch services provider and equipment manufacturer Space Exploration Technologies Corp. (SpaceX) is currently moving full speed ahead with its plans to deploy the Starlink constellation of satellites. These satellites will enable the company to earn revenue by providing internet access to consumer in the United States.

At the heart of Starlink lies the operational frequencies for the satellites and their ground receivers that SpaceX must share with other entities. The 12.2 GHz - 12.7 GHz band, in particular created friction between SpaceX and other non-MVDDS (Multichannel Video and Data Distribution) telecommunications services providers have opposed efforts by the MVDDS Coalition.

These discussions took a new turn when earlier this year SpaceX requested the Federal Communications Commission (FCC) earlier this year to let the company lower operating altitude for the Starlink satellites currently in orbit. The MVDDS coalition argued that the orbit lowering made it unfeasible for 5G terrestrial operations to be conducted via 12GHz band.

To that end FCC Commissioner Mr. Brendan Carr and other members met with SpaceX officials last week to discuss the ramifications of limiting access to the 12GHz spectrum for Starlink.

In a letter sent to the Commission’s Secretary Ms. Marlene Dortch on the same day that the meeting between FCC and SpaceX representatives took place, Noah Campbell representing RS Access LLC had argued that SpaceX stands to lose little should the Commission restrict the company’s uplink access to the 12GHz spectrum. Mr. Campbell argued that access to the band represented a mere 3.6% of the total spectrum that SpaceX can utilize, and that the modifications that the company proposed would end up significantly changing Starlink’s specifications that the company initially described to the Commission.

In particular, RS Access stated to the FCC that by changing the user station elevation angles of its Starlink user terminals SpaceX would not only end up restricting terrestrial 5G services, but that the change would also result in interference problems with the network itself.

Countering these and other points, SpaceX stated to the FCC that currently the MVDDS coalition has no terrestrial 5G operations with which any Starlink specification change will result in interference. In the meeting, the company asserted that it is the coalition’s responsibility to protect Non-Geostationary Fixed Satellite Service (NGSO FSS) satellite service operators from any interference that its terrestrial 5G services might cause; an obligation highlighted by e-CFR (Electronic Code of Federal Regulations). 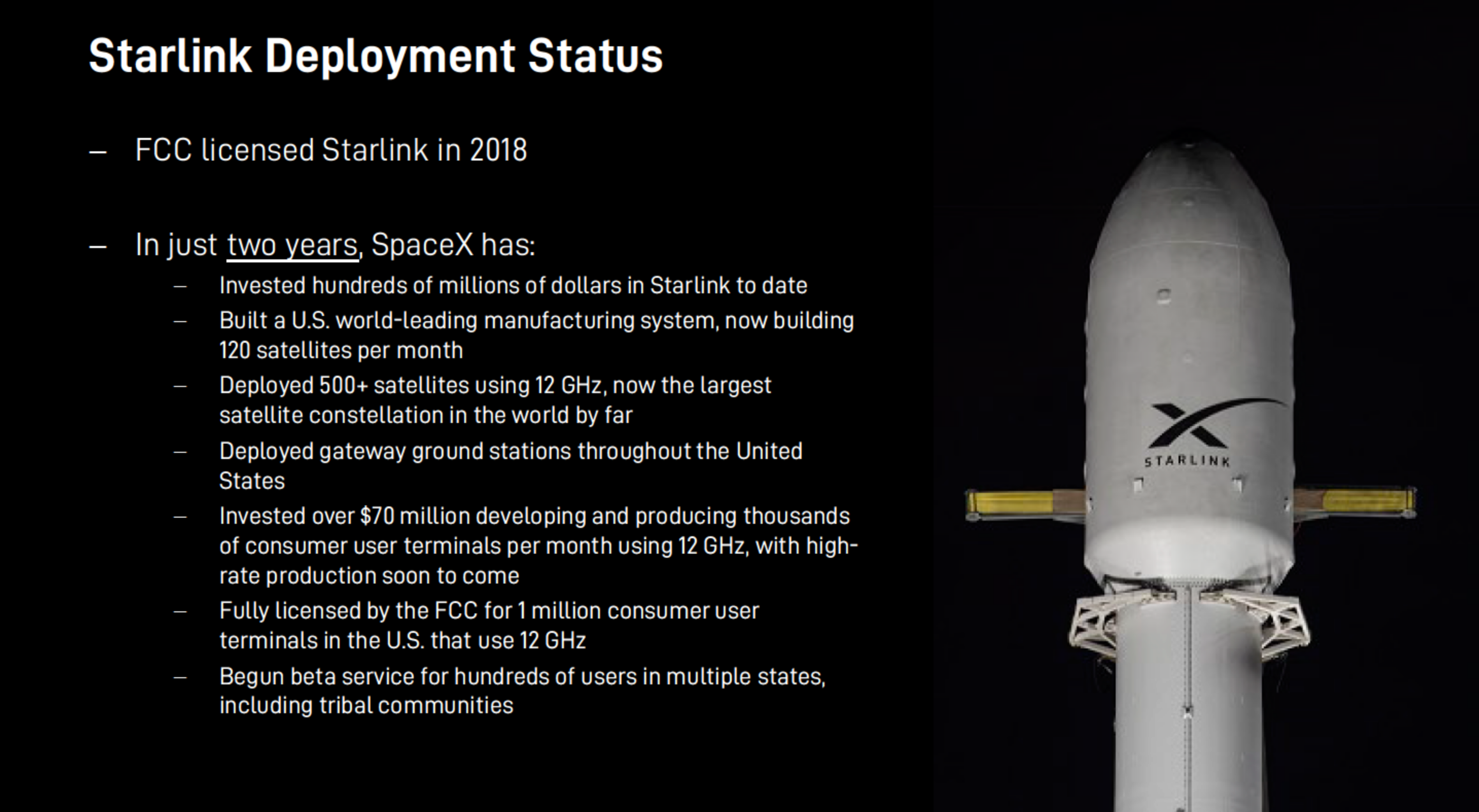 (At the meeting, Space X representatives stated before the FCC that the company has invested more than $70 million to manufacturer Starlink user terminals, with terminal production expected to ramp up soon. SpaceX has been authorized by the FCC to test Starlink in several American states, and the company expects to kick-off commercial operations later this year, previous filings with the Commission have revealed. (Image Source: SpaceX Ex Parte Notification for IBFS File No. SAT-MOD-20200417-00037 and Docket RM-11768.)

The company’s Ex Parte filing with the FCC reveals key details for the network. As per SpaceX, it has invested $70 million in Starlink consumer terminal manufacture and is currently producing 120 Starlink satellites per month. The consumer terminals are used by users to connect to the satellites, and the frequencies that they will use for their downlink are similar to those used by the MVDDS coalition’s planned 5G terrestrial networks.

Addressing the coalition’s claims about the negative effects of changing Starlink altitude and elevation angles on terrestrial 5G via interference, SpaceX stated before Commission representatives that it has filed proof with the FCC lower altitudes does not affect terrestrial coverage. The change also addresses the FCC’s key concern about Starlink’s latency capabilities, as SpaceX believes that the lower altitude will improve consumer latency. 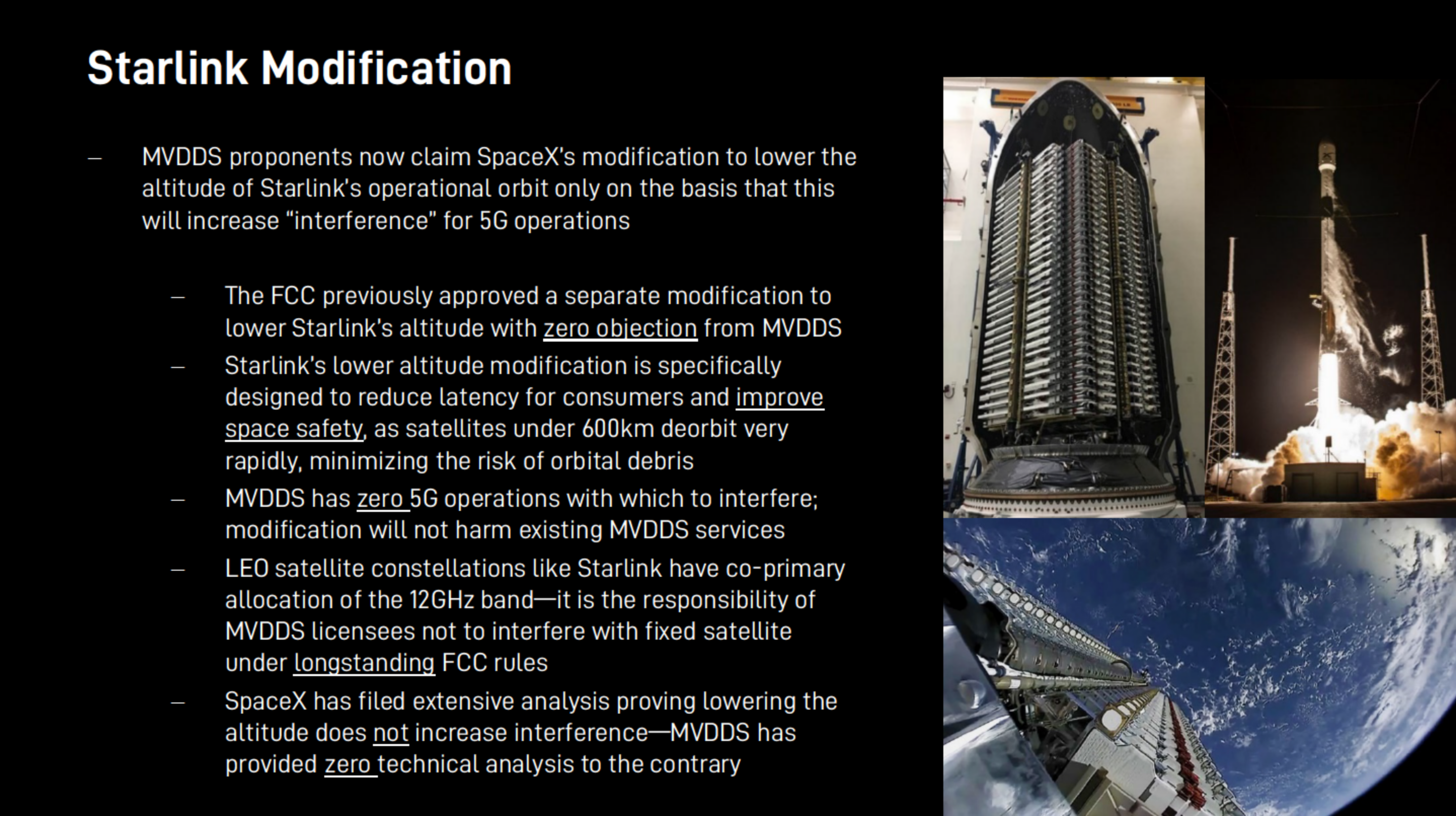 Finally, as it beefs up the narrative against the co-existence of MVDDS and NGSO FSS use on the 12GHz spectrum, SpaceX pointed out that the argument that a shift in Starlink’s operational parameters will hinder ‘coexistence’ with terrestrial services contradicts what the MVDDS Coalition has asserted previously before the FCC.

In other words, according to the company, the coalition’s argument that the Starlink altitude and inclination changes will make coexistence impossible comes with the inherent assumption that the absence of such changes allows it.

“Recognizing the implausibility of their earlier proposal, some parties now suggest that the additional rights 12 GHz MVDDS licensees request would somehow be consistent with their sharing the band with existing NGSO operations. But technical analyses submitted by the MVDSS licensees themselves flatly contradict this assertion, concluding that MVDDS operators could not be given increased rights without interfering with existing NGSO licensees." 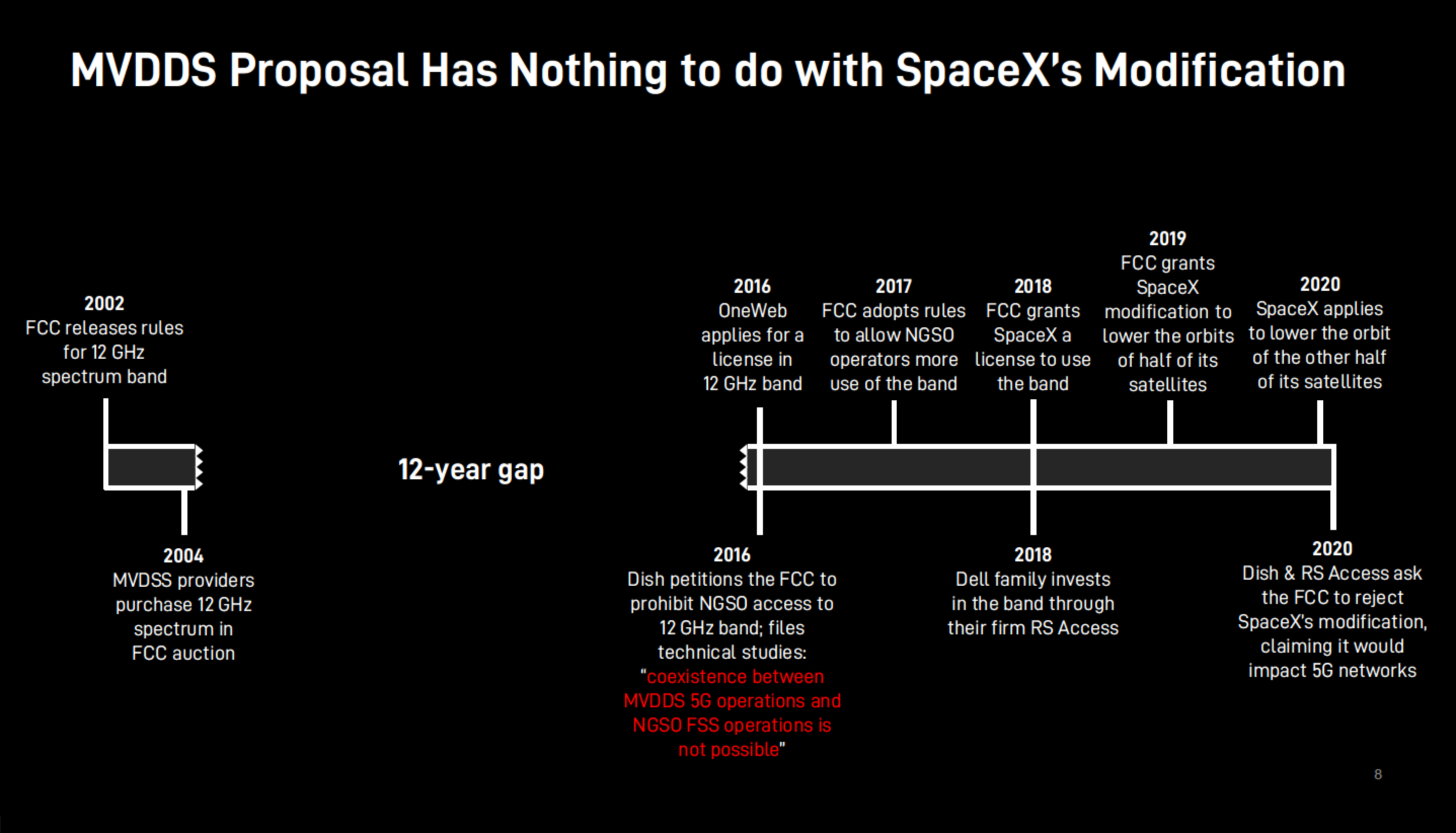 SpaceX cites a 12 year gap for development in 12GHz spectrum and MVDDS Operators’ earlier claims that NGSO FSS spectrum use can not coexist with their services as reasons for the FC to reject the coalition’s petition. Image Source: SpaceX Ex Parte Notification for IBFS File No. SAT-MOD-20200417-00037 and Docket RM-11768)

The conditions for coexistence, as highlighted by RS Access (were termed to be,

"To coexist with terrestrial services, NGSO earth stations must maintain a minimum elevation angle that is sufficiently high above the horizon to avoid receiving harmful interference from terrestrial operations. A low minimum elevation angle on an NGSO receiver increases antenna gain and makes the NGSO receiver more vulnerable to interference from terrestrial sources. SpaceX’s proposed modification does precisely that: SpaceX would make its user terminals more vulnerable to future terrestrial operations by dramatically reducing their minimum elevation angles to the horizon. Were the Commission to grant SpaceX’s application, future 5G licensees in the 12 GHz Band would have virtually nowhere to site their base stations without tripping over SpaceX’s sensitive receivers. Approval of the SpaceX Modification would eviscerate the co-primary nature of terrestrial services, give SpaceX exclusive dominion over the entire band, and sacrifice American 5G leadership for an unproven business plan."

The discussions between company representatives and the FCC come at a time when smartphone manufacturers and network equipment providers are bracing themselves for the rollout of 5G cellular and non-cellular services. SpaceX's ability to successfully demonstrate commercial operations with the FCC might put an end to speculation for the 12GHz spectrum.