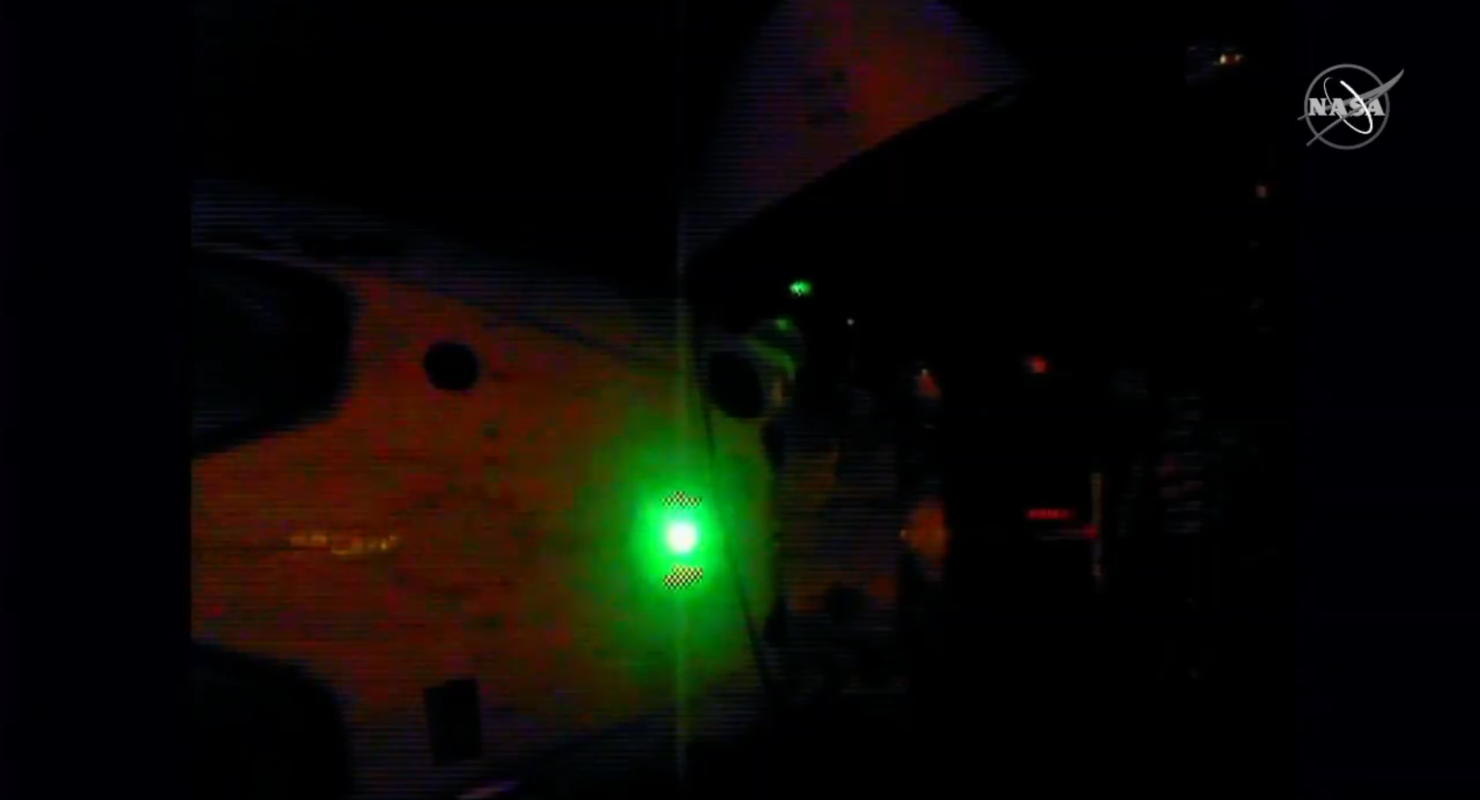 After having taken to the skies in May, the National Aeronautics and Space Agency’s (NASA) Demo-2 (DM-2) mission flying through astronautic launch service provider and equipment manufacturer Space Exploration Technologies Corp.’s (SpaceX) Dragon 2 vehicle has officially departed from the International Space Station (ISS). The Dragon 2, endearingly named ‘Endeavour’ by NASA astronauts Col. Robert Behnken and Douglas Hurley, is now under the final stages of its testing by the space agency to certify the spacecraft for regular flights to the ISS under NASA’s Commercial Crew Program (CCP). This program aims to bring down the costs of launching payloads to the ISS by utilizing the private sector to stimulate the Low Earth Orbit (LEO) economy.

Now as the mission approaches its final stages, the Dragon 2 spacecraft has autonomously undocked from the ISS’ Harmony module today at 19:35 ET. The undocking marks the final stages of tests for the vehicle, which has consistently been under evaluation at the space station over the course of the DM-2 mission.

As part of its undocking sequence, Dragon Endeavour will release its twelve hooks in two sets and then proceed to fire two pulses to physically separate it from the space station. The vehicle’s de-orbit burn will be autonomous, just like its undocking procedure. Dragon 2 will also adjust its apogee and perigee with respect to the ISS, with the vehicle’s apogee being 10 kilometers below the ISS and the burns slowly reducing its perigee as well. Apogee and perigee are terms used to describe an orbiting body’s orbital path, with apogee being the furthest part from the  planet (in the case Earth) and perigee being the nearest part or point. Dragon’s phasing burns will align its path with the landing site which will off the Pensacola coast in Florida, with the vehicle set to splashdown at 14:48 ET on Sunday.

These phasing burns will be followed by the spacecraft’s trunk being separated from its main body using a claw located on the trunk connecting several components. This will allow the spacecraft to ready itself to endure the harsh environment of re-entry. Endeavour’s trunk consists of its solar panels and heat radiators which generate its power and use thermal cooling loops to remove the heat generated by its on-board systems and crew. The solar panels were the primary limiting factor of the DM-2 mission due to their degradation in the harsh environment of space, and they managed to perform according to NASA expectations for power generation reported the space agency earlier this month. 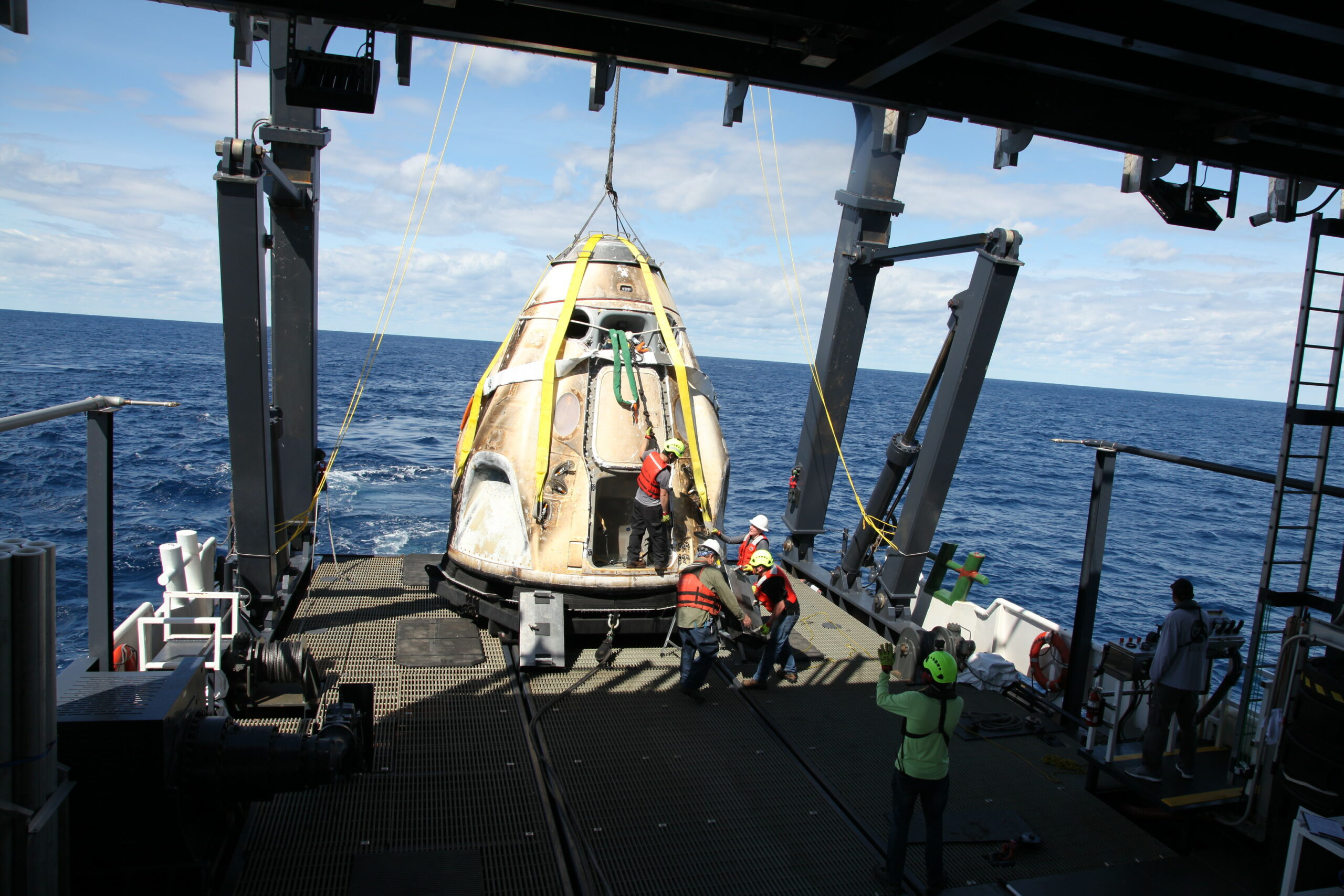 Once the trunk has been jettisoned, the vehicle will initiate its final de-orbit burn lasting 12 minutes as it starts to enter the Earth’s atmosphere. Entering the atmosphere will slow down its speed to an acceptable level (350 miles-per-hour) for the spacecraft to deploy its two drogue parachutes when it’s at a height of 18,000 feet. Once the vehicle has lost 12,000 feet in altitude and further reduced its speed to 119 miles-per-hour, Dragon 2 Endeavour will deploy its four main parachutes to ensure a safe landing in the Atlantic ocean.

Before re-entering the atmosphere, Dragon 2 will be traveling at roughly 17,500 miles-per-hour, and during re-entry, it will experience temperatures of up to 3,500 Fahrenheit according to NASA estimates. During re-entry, NASA and SpaceX will also experience a six-minute communication blackout with the spacecraft.

In addition to providing America with the capability to launch astronauts to space from its soil after nine years, the Dragon vehicles also allow NASA to retrieve cargo from the ISS – in a crucial capability that lets scientists understand the specifics of human presence in space. Since its trunk is lost during re-entry, the Dragon 2 Endeavour spacecraft will be equipped with a brand new trunk that features upgraded solar panels confirmed the company in a joint press briefing with NASA earlier this week.

The vehicle is slated to take to the skies once again in Spring next year as part of NASA’s second commercial ISS mission under the CCP dubbed Crew-2. Crew-1 is expected to depart from the ISS in September once NASA finishes evaluating the Endeavour spacecraft, with the vehicle for that mission currently undergoing preparation at SpaceX’s facilities in Hawthorne, California.

During free-flight, the Dragon 2 spacecraft can change its landing site as well, in another crucial capability that provides it with greater latitude to deal with potential, unseen weather constraints. This varies the time that Behnken and Hurley will take to return to Earth between six and 30 hours due to the alternate landing sites. Should weather conditions become unfavorable, the vehicle will remain in the Earth's orbit for up to 48 hours before the next attempt.