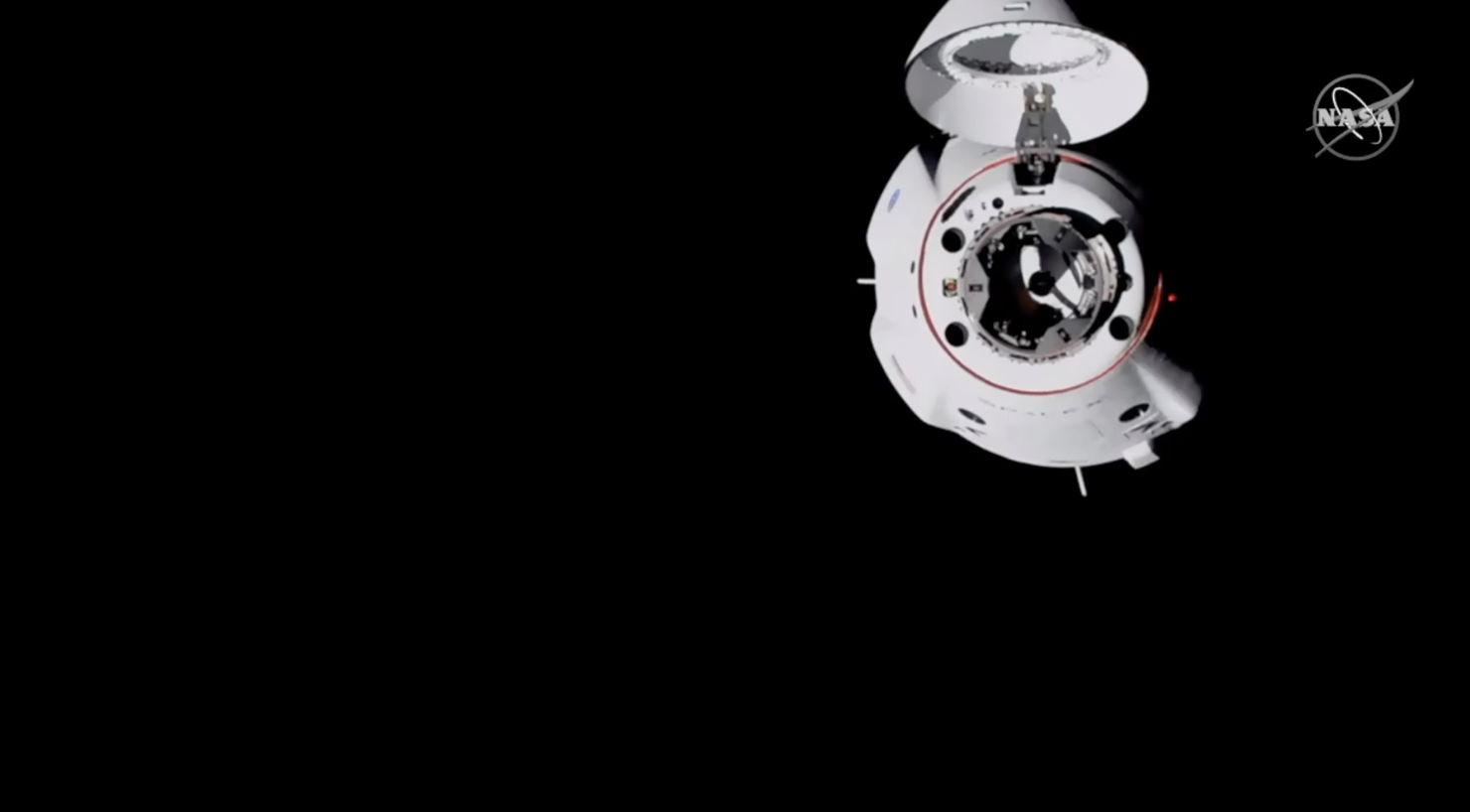 SpaceX Crew Dragon twenty meters away from the ISS at 22:53 EST on November 16, 2020 as the astronauts wait for the sun to set before initiating their final approach. Image: NASATV

After having spent 27 hours in orbit to make their journey to the International Space Station (ISS) NASA astronauts Victor Glover, Michael Hopkins and Shannon Walker and Japan Aerospace Exploration Agency (JAXA) astronaut Soichi Noguchi safely reached their destination as their vehicle docked with the ISS at 23:01 EST today. The four astronauts were flying abroad the SpaceX Crew Dragon capsule spacecraft under NASA's Crew-1 mission that will have them spend six months onboard the orbiting station and conduct a variety of experiments.

The end of their 27-hour journey marks an end of SpaceX's decade long journey of developing a spacecraft capable of taking humans to space. Under NASA's Commercial Crew Program (CCP), SpaceX has become the first company in human history to successfully fly crew and both crew and cargo to the ISS on a private spacecraft.

While today's mission is not the first time astronauts have flown on a Crew Dragon (that honor having fallen to NASA's DM-1 astronauts),  it is nevertheless the first operational mission for the vehicle and one that will see it stretched to its maximum operating limit. This limit is determined by a vehicle's solar panels that remain deployed during the course of its mission and degrade in the harsh environment of space.

They docked after an hours-long approach to the ISS that involved a series of burns to align the spacecraft with the space station. The final 'Go or No Go' call came when the astronauts were twenty meters away from the station, as the Crew Dragon's onboard computer did most of the work for them. As they approached the ISS, NASA astronaut Kate Rubins also monitored Crew Dragon from the station in addition to ground and mission control operators on Earth. During the go or no go all, ground control crews, the Crew-1 astronauts and the ISS astronauts made sure both the capsule and the station were in clear view to make an approach.

During Crew Dragon's approach to the station, the ground control crew had to reset the spacecraft's Rendevous and Proximity Operations Program (RPOP) several times.  They coordinated with the NASA astronaut while conducting the reset, with the spacecraft being fully autonomous during this time period.

At 22:50 EST, once they had reached the waypoint 2 (20 meters away from the ISS), Crew Dragon's crew chose to hold their approach to the ISS for ten minutes due to lighting conditions. Ground control crews had given their clear for docking at this time, and the astronauts' decision came as a cautionary measure since the Dragon remained fully autonomous for its final approach.

To dock with the ISS, Crew Dragon used its infrared camera to spot the hatch on the ISS' node with which it was to dock. As opposed to what intuition would suggest, the astronauts' decision to hold off docking for ten minutes was to ensure that the sun had passed away. This was made to ensure that there were no shadows that could complicate their approach to the ISS in case the need arose for them to take over from the onboard computer.

Soft capture for the vehicle was confirmed a minute after docking at 23:01 EST as its rings retracted and waited for the hard capture to determine if any leaks were present. The rings retracted six minutes later to kick off a series of steps prior to the hatch opening to allow the Crew-1 crew to board the ISS, with the hard capture sequence initiating roughly two minutes later.

Six of the Crew Dragon's hooks had been deployed at 23:12 EST, with the next six 'capturing the ISS' two minutes later at 23:14 EST. Following this, the astronauts proceeded towards the aforementioned leak check, with astronaut Rubins announcing that docking was complete with hard capture completing at approximately 23:17 EST. The hatch from the space station side was opened by the astronaut roughly twenty minutes later.

NASA and SpaceX's next mission to the ISS will take to the skies in Spring 2021, and once a Cargo Dragon also lifts off under the CRS-21 mission next month, then two SpaceX Dragons will have been docked to the ISS - in another record for the company and the space agency.

Updated at 23:39 EST with details of hatch opening and minor changes.