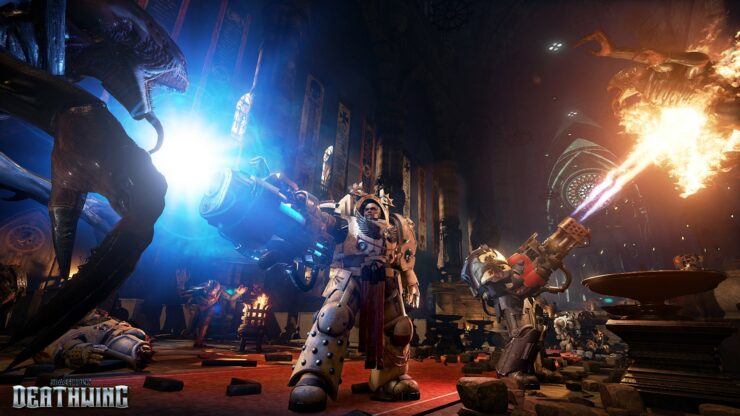 For the Emperor! Publisher Focus Home Interactive released a new, 17-minute long video of campaign gameplay for Space Hulk: Deathwing and man, is there a lot of shooting.

It's set in the Warhammer 40K universe where you play a Librarian of the Dark Angels' 1st Company, the Deathwing. The Deathwing is sent to deal with the Genestealer threat on the Space Hulk Olethros. In case you're sorely uneducated in Warhammer 40K lore, a Space Hulk is a giant amalgamation of derelict ships and other huge space debris ripe with ancient tech and untold dangers. Streum On Studio has taken a painstaking amount of time to make each ship and corridor different from the last, giving them each a personality and unique look to them.

The Campaign itself will run around 15 hours on medium difficulty and can be played with up to 3 of your friends in your squad, taking the fight to Genestealers. Speaking of Genestealers, you might need all the help you can get considering that those monsters behavior will adapt based on their numbers and how you fight them. As leader of the squad, you can issue commands to your men such as cover fire, heal or physically block out the enemy.

The deeper into Olethros you go the more gear and weapons you can upgrade. The experience you accumulate will be used to unlock new abilities, like a powerful chain lightning attack that's great for dealing with multiple enemies. As you can see from the video below, you're going to need all the advantage you can get once the Genestealers start to swarm up on you.

Space Hulk: Deathwing is coming to PC on December 9th; expect to see console versions sometime in 2017. Pre-order now the game on Steam and get access to the closed Beta, with the additional bonus of an exclusive in-game weapon, the Lost Mace of Corswain. Space Hulk: Deathwing costs $39.99, pre-ordering now will also save you 15% off the price.