We now have preliminary specifications of both the Microsoft Xbox Series X (XSX) and Sony Playstation 5 and it's time to do a quick analysis of their graphics capabilities. Before we begin, a primer: this article is based only on the information released by both companies and their execution and handling of said release. Nothing is presented as the gospel truth for you to believe, all facts and arguments are given clearly.

The build-up to the Microsoft XSX and Sony PS5 specification reveal has been littered with a litany of rumors and leaks and on an absolute basis, both consoles have delivered a resounding increase in power levels from the last generation. The Sony PS4 featured a graphics horsepower of 1.84 TFLOPs and the Xbox One featured 1.40 TFLOPs in the S variant. Both companies have delivered a speedup of 5.54x and 8.58x respectively - which is a huge achievement and will undoubtedly result in some spectacular gaming fidelity.

Another interesting trend we saw during this iteration of consoles is that while the current-generation consoles were already obsolete (in terms of graphics horsepower and at the time of release) when compared to PC GPUs, next-generation consoles have narrowed the gap to the point where they are within spitting distance of high-end graphics cards on the market. This is a very welcome trend because it will allow hardcore PC users to consider consoles and shift to the medium without compromising on visual fidelity. Expect the Total Available Market (TAM) of consoles to increase.

Here is where things get murkier though, while Microsoft's reveal was excruciatingly clear, succinct and allowed third-party testers like Digital Foundry to get closeups out, I found the Sony Playstation 5 reveal to be somewhat lacking in clarity and almost, deliberately vague. My primary pain point was when the Sony PS5 was advertised to ship with 10.3 TFLOPs and then the words "variable clock rate" were uttered in the same breath. This, as many of you have guessed is misleading (the magnitude of which depends on a couple of things discussed below). 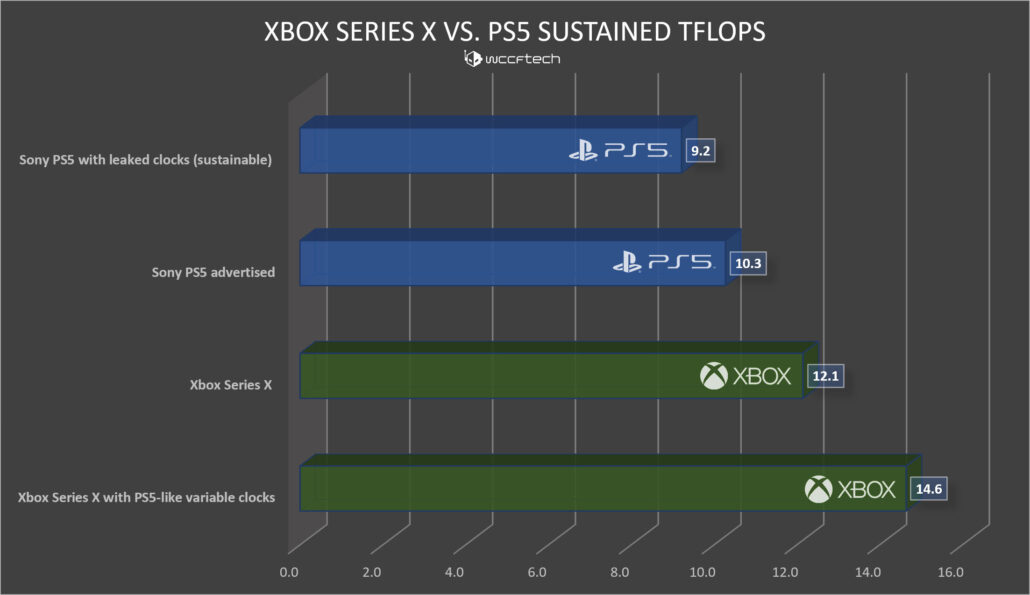 So what is all the ruckus about? Well, TFLOPs are a very commonly used metric for maximum computational throughput. Theoretically, this allows you to see the maximum potential of any GPU when used in its entirety. TFLOPs are a function of the following: [Clock Speed * 2 * Stream Processors / 1000]. In the case of the next-generation consoles, which are based on AMD's RDNA which in itself uses CUs or Control Units, the equation becomes [Clock Speed * 2 * CU Count * 64 / 1000].

You can now see why clock speeds and the actual hardware specifications (how many control units a GPU has) both play a very big role in how much graphics power a GPU has. With Microsoft, we know that the GPU has 52 CUs (for a total of 3328 stream processors). We also know that the GPU will have a stable clock speed of 1.825 GHz and is fabricated on TSMC's '7nm Enhanced' or N7P process (this gives us further information about what to expect). This also tells us that we can absolutely trust Microsoft's calculation of 12.1472 TFLOPs (1.825 * 2 * 52 * 64/1000).

On the other hand, the Sony PS5 has something called a variable clock rate. What that means is that the console will not run the GPU at 2.23 GHz all the time. Since Microsoft's clock is a static number, just because PS5's clock rate is variable makes the 10.28 TFLOPs number uncomparable to the Xbox Series X and misleading. This is because XSX is displaying the "sustained TFLOPs" figure while PS5 is displaying the "peak TFLOPs" figure. To give you some context, when the industry uses the term TFLOPs, it is usually referring to the sustained TFLOPs figure.

Okay, so what else? Well, it is extremely unlikely that the PS5 will be able to sustain the 2.23 GHz clock for anything but a very limited number of scenarios (think games which consume an excruciatingly low level of CPU power). Before we explore that, however, we first have to look at some fundamentals, namely the process architecture. TSMC is currently offering three processes for the 7nm node. Only one of these is capable of sustaining 2.23 GHz reliably.

Here are the arguments against PS5 being on the N7+ process:

Here are some arguments for PS5 being on the N7+ process:

Here is the thing though, even if the console is based on the N7+ process, it still doesn't change the fact that the CPU underclock implies that they are pushing against their thermal and power envelope (voiding any benefit the N7+ process would have yielded). This means things are going to get ugly and developers cannot just rely on all CPU and GPU power like the Xbox Series X - it will be a trade-off. If they are on N7P or N7, this tradeoff would be even harsher. So the question then becomes, how can we compare the Microsft Xbox Series X graphics performance to that of the Sony Playstation 5? Well, you can do this by guestimating the "sustainable" clock speeds.

Once again, we have no clear information from Sony but based on past leaks, 2 GHz is the figure to go by. Keep in mind even this clock rate is too high for the N7 node (AMD's 7nm based RX 5700 XT usually cannot hit 2GHz). It might be possible on the N7P process and it should be possible on the N7+ node. At a GPU clock speed of 2 GHz, sustained, the PS5 nets a graphics TFLOPs of 9.2. This is a very respectable amount of course, but nowhere near the ballpark of the Xbox Series X.

The fact that the XSX has 44% higher CU count is something that the PS5 simply cannot overcome. Microsoft might actually have underclocked its own console to make way for a "fine wine" philosophy as we have seen in the past. In fact, if they were to approach a dynamic clocking philosophy as well, they can hit an astounding 14.6 TFLOPs figure (using the PS5 clocks) - which is absolutely insane for a console. That said, you don't want to do that. Optimizing games is hard and having a static clock with no power fluctuation shenanigans is always easier to work with than a dynamic approach. 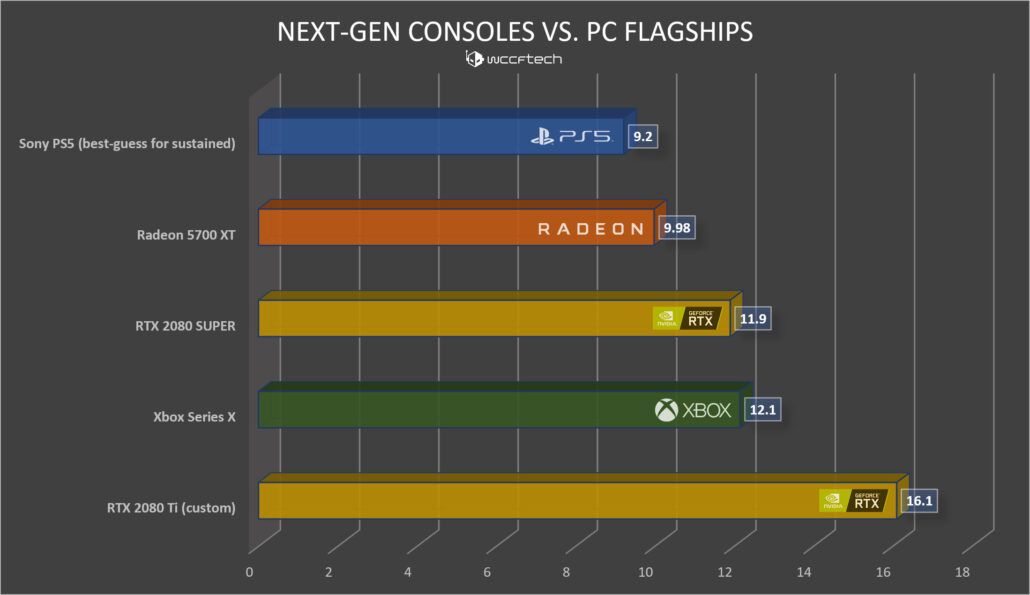 Remember when I said that these next-gen consoles are revolutionary? Well, I wanted to compare these to PC GPUs (sustained TFLOPs only) and while I want to point out that comparisons across architectures can be slightly off, these are accurate enough for some light comparison. NVIDIA has retained its performance crown (as always) at 16.1 TFLOPs on the RTX 2080 Ti but just barely.

The Xbox Series X with its 12.1 TFLOPs actually beats out some lower clocked variants of the RTX 2080 SUPER! This is the first time that a console has been able to take on the PC high-end market and I think that deserves applause. Part of the reason for this is, of course, the fact that next-gen consoles are built like miniature PCs and architected as x86 devices. We even threw AMD's RX 5700 XT in there and that is roughly equivalent to the Sony PS5 once you factor in variable clock rates. 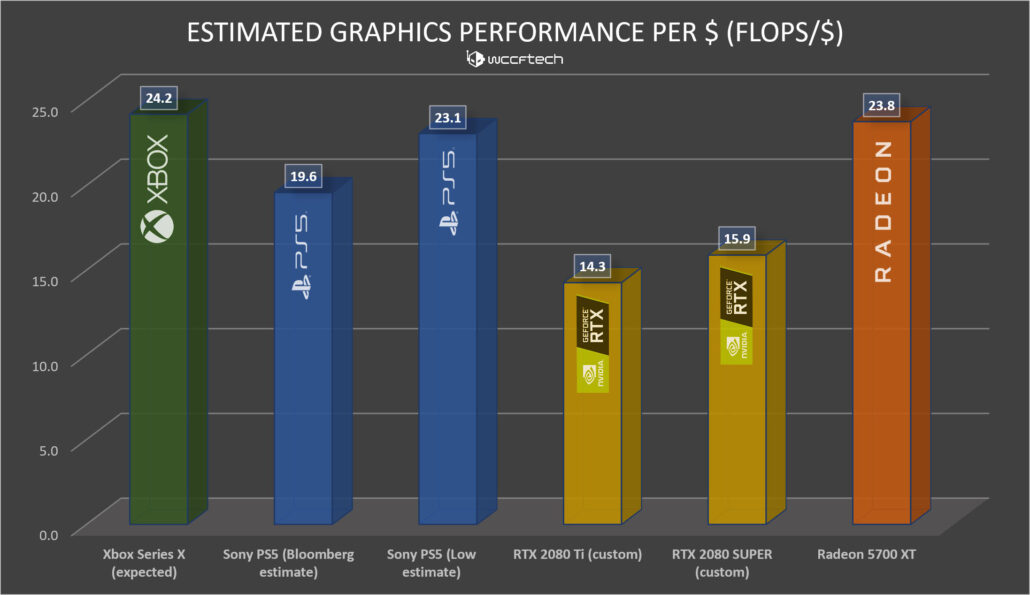 I also wanted to throw in a "fun" graph at the end. Graphics performance isn't the only metric we want to look at. Price matters too. Dividing the TFLOP/s count by the asking price gives us the "value" of the gaming device. While we do not have confirmed values for any console, I took price estimates making the rounds (Bloomberg PS5: $470, Low estimate PS5: $399, Xbox Series X estimate: $499) for this comparison. You can see how the next-gen consoles absolutely blow away their PC counterparts in performance per dollar (well, NVIDIA at any rate).

This also means that the companies actually have a lot of flexibility [cue ominous warning] when setting the MSRP. With the Xbox Series X going against the $1100+ RTX 2080 Ti, I wouldn't be surprised if Microsoft decided not to go for the $499 price tag and instead opt for something even more premium (although the standard, contra-revenue, razer and blades model would beg to differ). Anyways, that is all for now. Stay tuned for further updates.