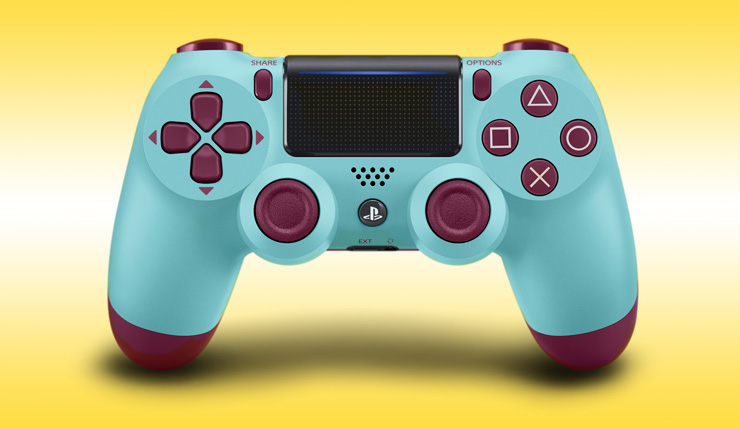 Limited-edition designs aside, it’s been a while since Sony has unveiled any new DualShock 4 color variations – the classy Steel Black and Midnight Blue models are the most recent, and they were announced back in January. Well, Sony is expanding its DualShock lineup in a big way, with four new color schemes, some of which are, um, rather bold (to put it kindly).

The four new DualShock 4 color schemes are Berry Blue, Sunset Orange, Blue Camo, and Copper. You can check them all out in the gallery, below.

That Berry Blue controller is…something else. I’ll admit, I’m sort of into the Sunset Orange one, eye-searing as it may be, as it kind of reminds me of my beloved old Spice Orange Gamecube controller. Meeemories. Here’s how Sony describes the new controllers:

Bright, playful, and fun, the new Berry Blue edition brings new flavor to the DS4 lineup, while the vibrant Sunset Orange brings a little heat to your gameplay. The two-tone design offers a stylish contrast that makes the buttons and sticks pop!

If you’re a fan of trendy patterns, the Blue Camouflage DS4 will be right up your alley. Alternatively, if you’d prefer sticking to one color, stand out with another metallic addition to the lineup with the shiny and refined new Copper DS4.

The new lineup of DualShock 4 colors will cost $65 each, will go on sale sometime in September, and remain on shelves “while supplies last,” which implies supplies may be somewhat limited. The Copper design will initially be exclusive to GameStop, but will eventually be available at other retailers.

Interested in picking up any of Sony’s new controllers? Making your friends to play with the Berry Blue one might be a good way to gain the psychological advantage! You can get pre-order details, right here.