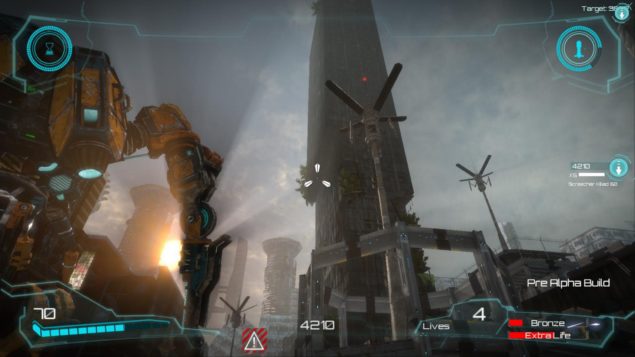 The last time I went to Manchester, here in the UK, they were giving out on-the-spot fines for dropping cigarette butts, so if the version of the city from upcoming mech shooter Beyond Flesh and Blood becomes reality, there's going to be some really irate Community Support Officers.

I kid. Liverpool is just as much a stickler for these litter rules as Manchester, and they're both all the better for it, chock full of beautiful locations and iconic landmarks. That's part of what makes Beyond Flesh and Blood so interesting. They might have jumped forward in time more than 250 years, but they've managed to include some of the locations that make the city that Alex Ferguson built great.

Manchester-based developer Pixelbomb today announced that Sold Out - the same people who've been selling endless copies of Broken Sword in supermarkets for the last two decades - have secured the boxed rights to Beyond Flesh and Blood and will sell it for £29.99. It's due on PC, VR and console in quarter two of this year.

“We have a standout hit with Beyond Flesh and Blood. Our upcoming marketing campaigns clearly demonstrate our ambitions for the game, and the studio. This means that in order to maximise all revenues and plough funds into building the brand; no revenues can be left on the table.

“Pixelbomb enjoys a direct-to-digital relationship with gamers, however, we know that significant numbers of consumers want a boxed version of Beyond Flesh and Blood. Sold Out is the natural choice of publishing partner, and we’re thrilled to work with the whole team.”

“Pixelbomb Games has highlighted its drive and ambition as a studio, and as developer, has been quietly building a top quality Mech shooter. Sold Out were blown away by Beyond Flesh and Blood at Insomnia56, and the latest version of the game has looked and played even better than we could ever have hoped to see. We just had to strap Sold Out’s boxed sales machine to their digital engine, as this unique Mech shooter is going to be one of the major releases of 2016.”