With little more than two weeks left until 2016 comes to an end, we've got a lot to look over. The year has seen its fair share of surprises, upgrades and launches. The biggest surprise was the failure of the Galaxy Note 7 and with it Samsung's ambitions of sustainable competition for the iPhone. At the upgrades end, Qualcomm launched two processors instead of one, with moderate performance upgrades. For launches, the usual cycle of flagship devices with improvements took place. Today, we've got a neat table for you which summarizes all the mobile processors you should know about. Take a look below.

When it comes to leaks, China' microblogging sphere is famous. Sources there post information from everything to flagships devices and mobile processors. In fact, some of the earliest information surfaces on Weibo, which is later corroborated by Western sources. So safe to say, Chinese sources are often the first to be in the know about upcoming product launches.

Today, blogger K_Juma is back and he's got a nice table that summarizes information about upcoming and present mobile processors. Since the table is in Chinese, we've got a couple of pointers for you to decipher it. The columns represent chip makers, Qualcomm, MediaTek, Huawei, Apple and Samsung, from left to right. The rows represent benchmark scores and performance expectations for upcoming hardware. 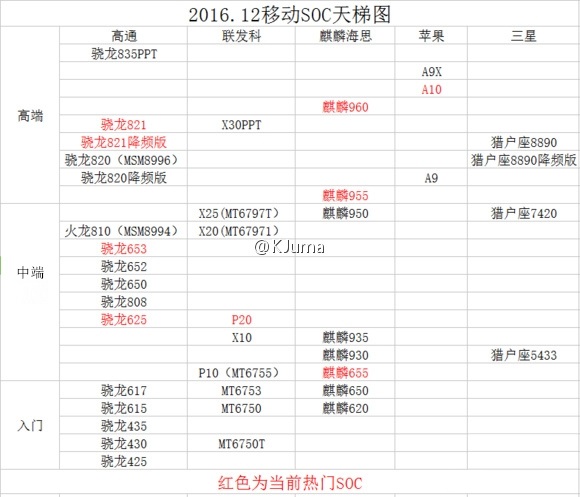 As you can see, the processor rankings are just what we'd expect. At the top of the chain is Qualcomm's Snapdragon 835, due to the fact that it'll be manufactured on the most advanced manufacturing process of the rest. At second place, is Apple's A9X, possibly due to its massive 12 core GPU. The A10 is in third place, with the Kirin 960 and the Snapdragons 821 and 820 following in. It's interesting that despite being almost a year old, Samsung's Exynos 8890 is right among the top listings.

Taking a look at this table, we're interesting to see how the Snapdragon 835 and Samsung's tentatively dubbed Exynos 8895 turn out to be. It'll be the battle of kings in Q1 2017, with both manufacturers ready to show their achievements with 10nm. Qualcomm's had a rough patch ever since the Snapdragon 810 and the company finally looks to be able to regain its former position in the mobile processor world. Thoughts? Let us know what you think in the comments section below and stay tuned for the latest.