The silicon quality of Intel's 13th Gen Raptor Lake CPUs including the flagship Core i9-13900KS has been evaluated in a massive binning test by Igor's Lab.

We all remember the good old days of Silicon Lottery which offered users a range of silicon bins without the user requiring to test through multiple samples. This came particularly useful during overclocking sessions and to enthusiasts who were trying to get the best silicon for 24/7 usage. It all ended in 2021 when the owners announced that limited overclocking headroom on all modern-day CPUs made their operations non-viable.

That's particularly true considering that AMD & Intel are squeezing out every bit of juice from their chips in this long-going GHz race. Both chipmakers have offered their highest clock frequencies on the recent parts with AMD aiming for 5.8 GHz and Intel aiming for 6.0 GHz. However, overclockers can't simply tell what silicon bin they have landed in their hands.

To make the binning evaluation process a little bit easier, motherboard makers developed built-in tests which can provide a prediction of how good the CPU silicon is for your particular sample. The one on ASUS motherboards is known as "SP" or Silicon Prediction and it simply provides a number that can be used to evaluate the binning quality. The higher the number, the better the silicon you got.

Igor's Lab has been using this method to evaluate the binning quality of various Intel Raptor Lake CPUs for a while now. With the help of some friends, the outlet managed to secure 199 i9-13900KS chips. Now the KS is a "Special Edition" SKU that is also the world's first 6 GHz CPU and naturally, it should offer the best silicon however, it looks like the chip also has various SP qualities. The good news is that when it comes to overall silicon quality, the number is higher than 100 across all the tested SKUs with an average of 108.1 and a highest of 116 points.

Looking at the per-core SP score distribution, the P-Cores are the highest silicon quality with an average of 117.5 points while the E-Cores vary with an average of 90.4 points in the test. Now it should be remembered that the P-Cores and E-Cores cannot be compared directly owing to their different V/F curve. The memory controller also plays a significant aspect here as the SP tests show a 77.1 score on average and up to 89 points at best. This huge disparity in the IMC numbers shows that even a chip like the Core i9-13900KS may have a hard time running DDR5-8000 memory kits.

Igor's Lab has also previously run similar "Silicon Prediction" tests on almost 500 13th Gen "K" CPUs such as the Core i9-13900K, 13700K, 13600K, and their "F" variants. The tests show that the Core i9-13900KF comes with a better bin than the 13900K, the standard 13700K can offer a better bin than i7 13700KF chips and the standard K Core i5-13600K is generally the choice to go for if you want to get a higher silicon quality. The results from Igor's Lab below speak for themselves although these may not ensure you the final silicon quality that you get. You can also find the full data set at this link. 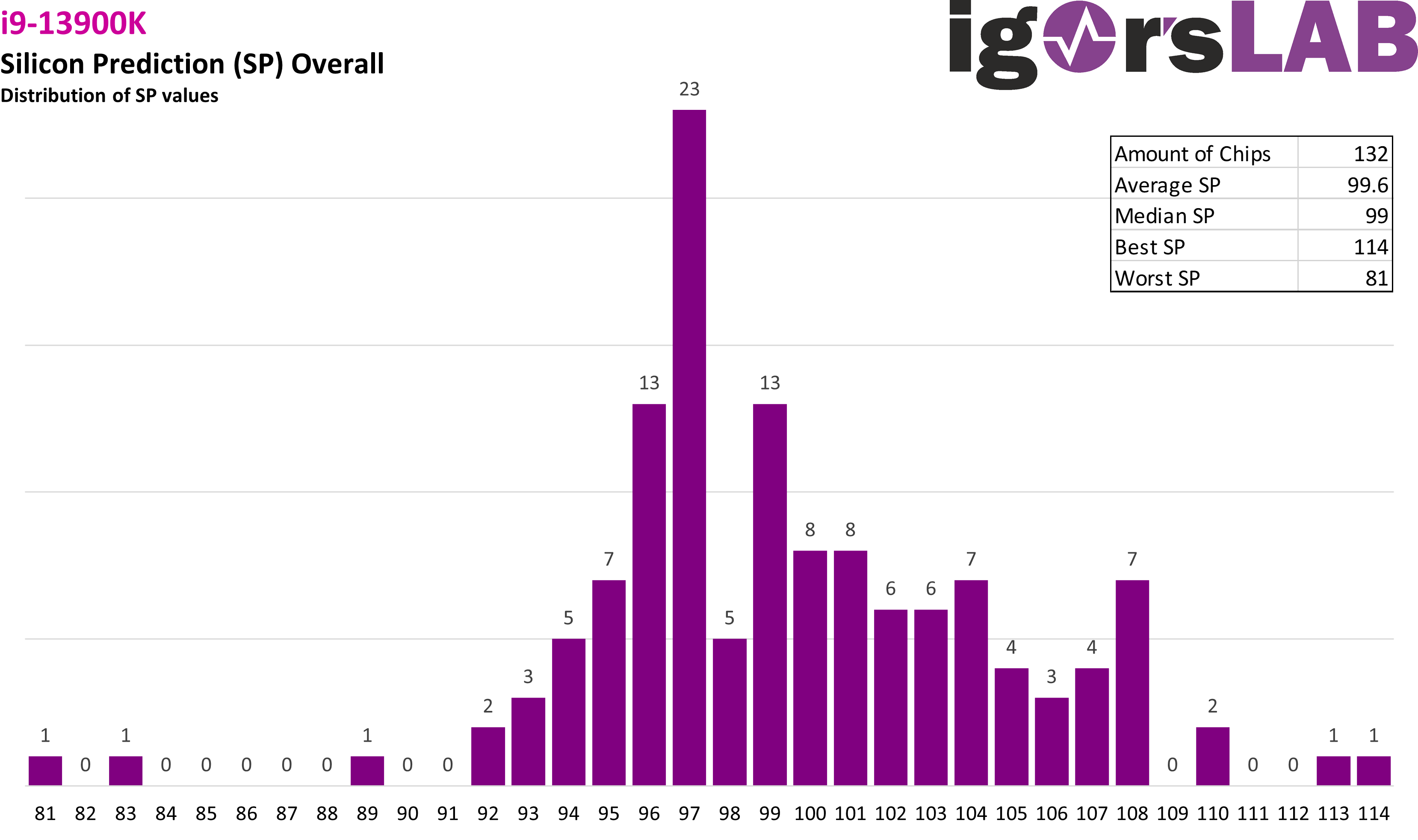 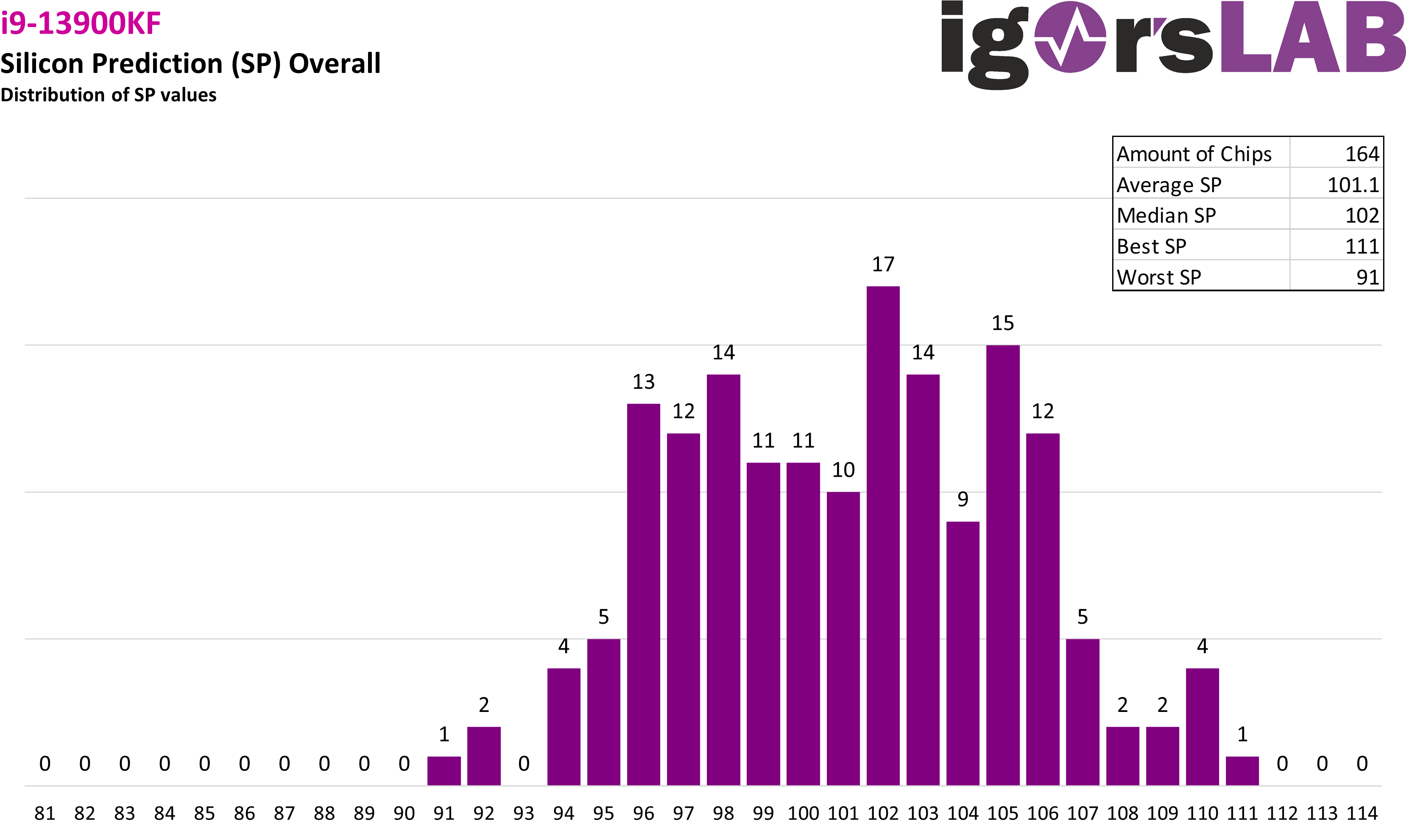 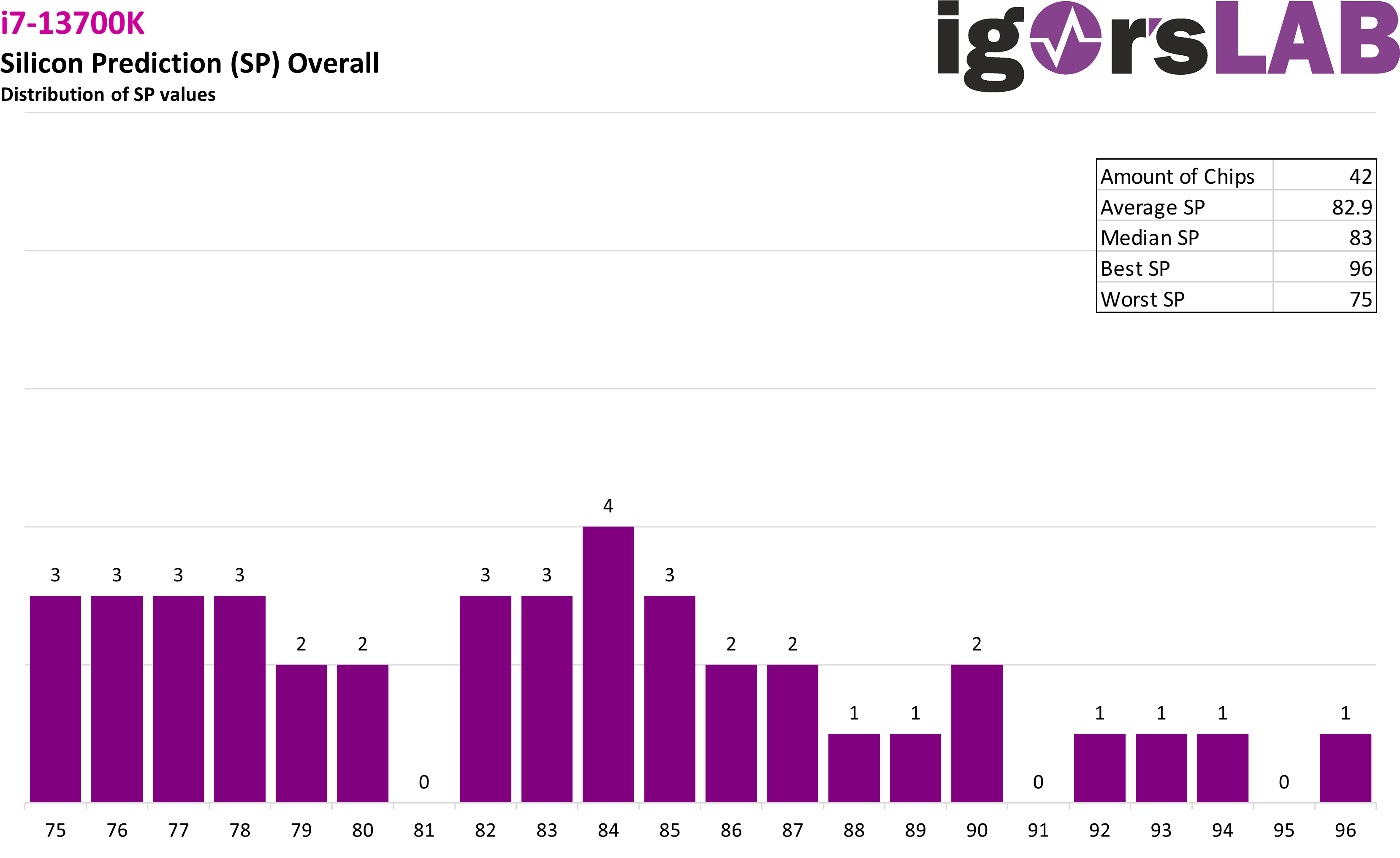 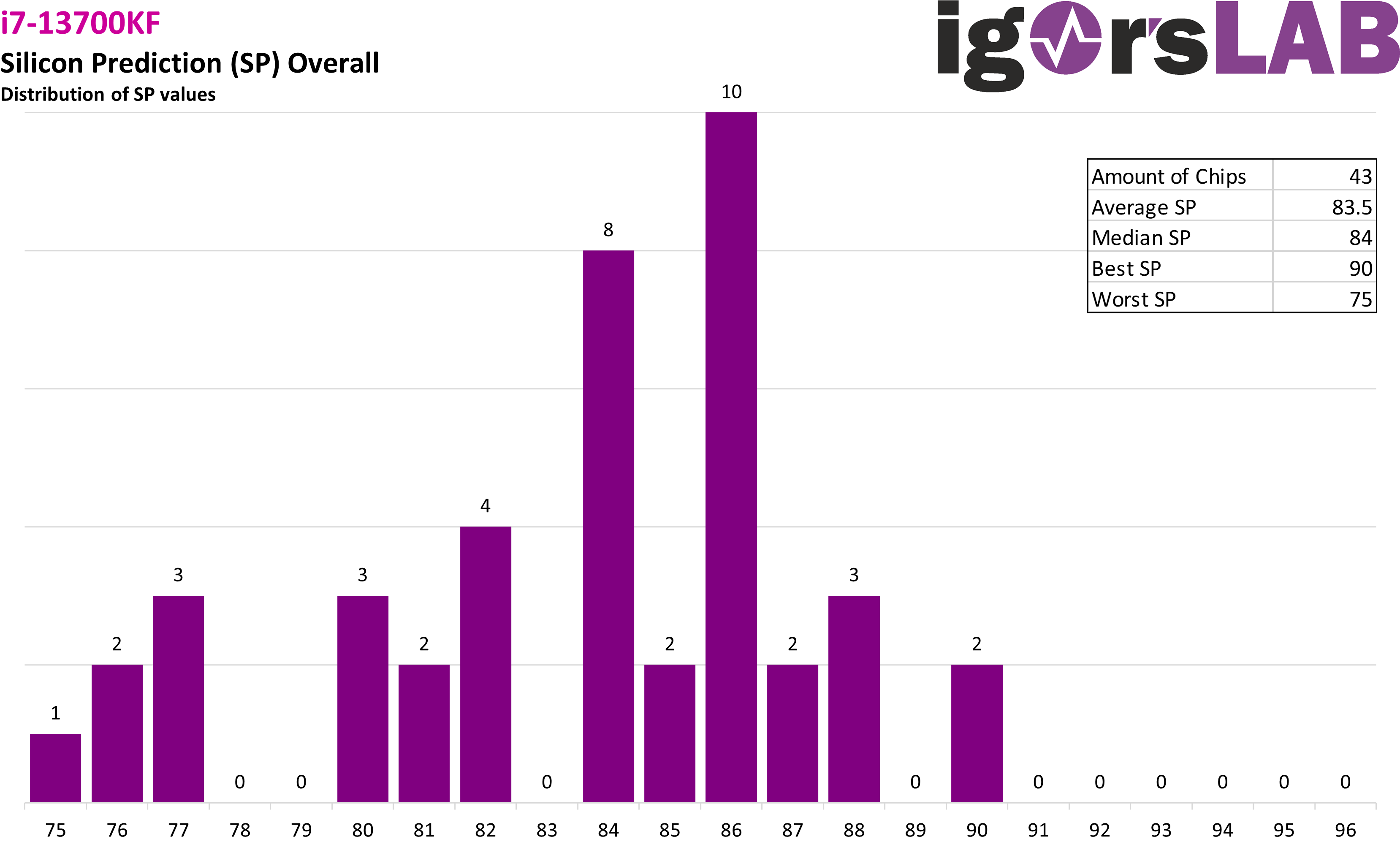 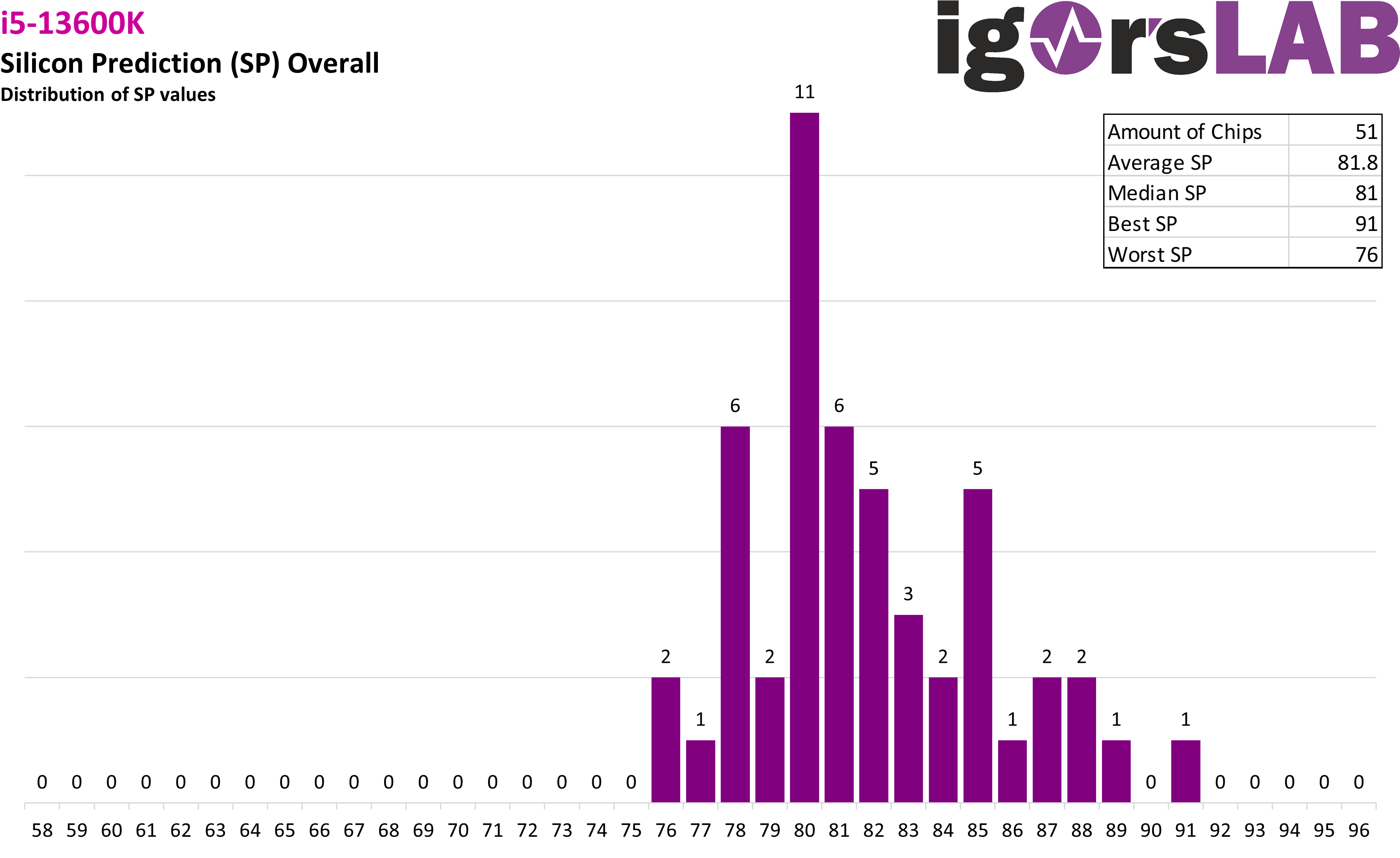 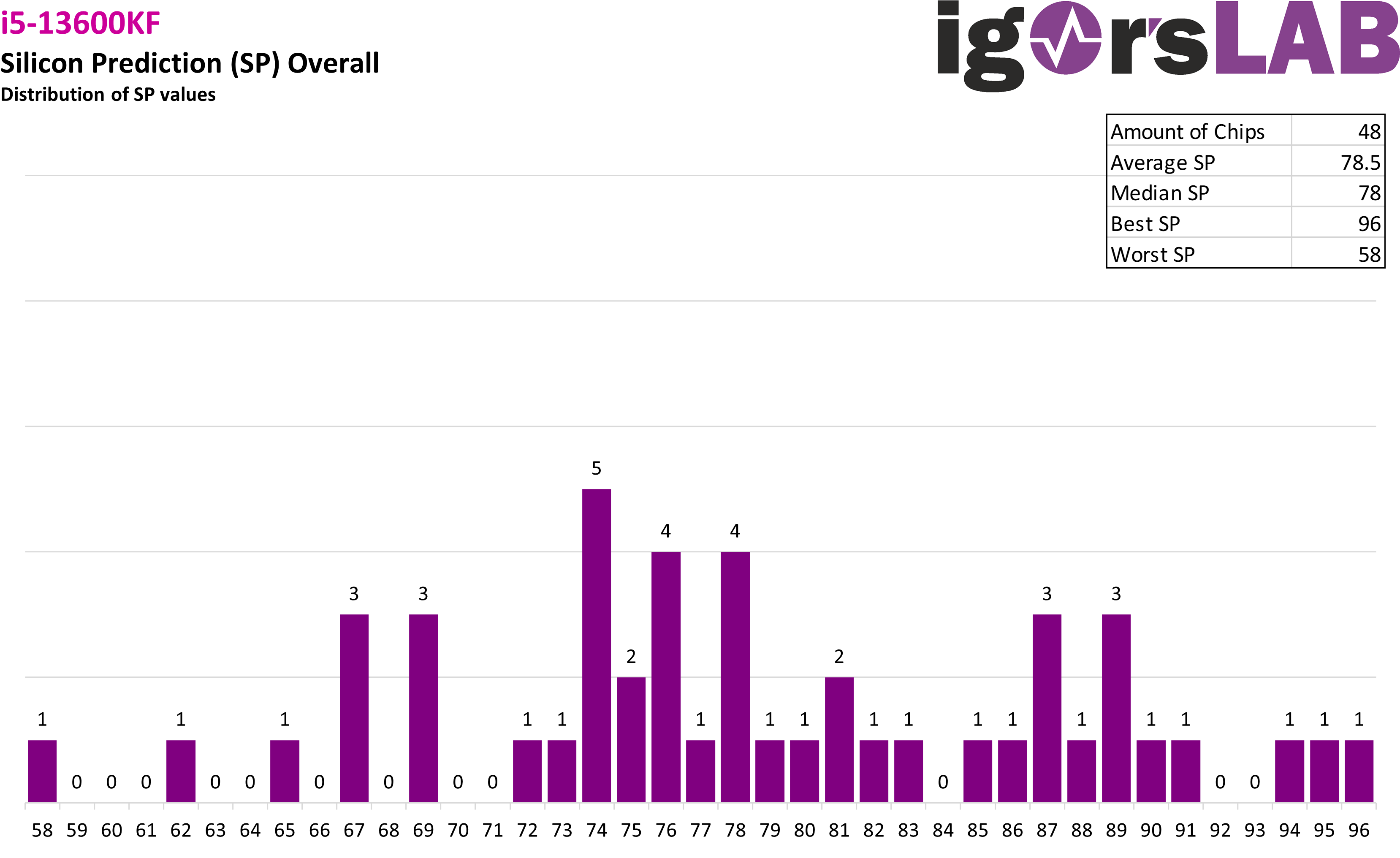