Did anyone happen to play with the reboot of 3D Realms classic Shadow Warrior? If you happen to be in that crowd, Flying Hogs has just pushed out their newest patch for the classic shooter, Patch 1.5.0. This patch has a lot of graphical updates and even enables DX11 for some theoretical boost in graphics. 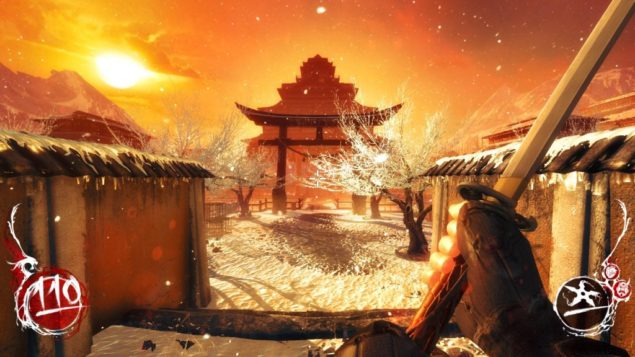 Shadow Warrior Patch 1.5.0 is available for everyone running Windows Vista and above. Now you can enjoy DX11 level graphics.

Patch 1.5.0 is primarily a performance and graphics enhancement patch. The patch brings a lot of new effects and finally brings with it the DX11 pathways that can improve both visuals and performance at the same time. The full patch notes are below.

Please note that version 1.5 is not available for Windows XP.

If you have already completed the game - In Shadow Warrior 1.5.0 only the initial save for each level will be available.
All your stats and upgrades will remain the same in the saves, but all your quicksaves and checkpoint saves will become unavailable.

We are sorry for the inconvenience but this was the only way to introduce gameplay changes.

The patch hasn't been without it's share of hostility, however, as people have equated far better performance and a difference in graphics with a downgrade. The differences, of course, are due to the change from DX9 to DX11. it handles a lot of the effects differently, and they'll probably look a bit different as well. One user even made the conclusion that because they can now play at 4K without frame drops, that it can't possibly be due to optimizations alone.

Flying Wild Hog has responded to those claims by saying that the SSAO and shadow filtering algorithms were completely re-written in DX11. Lighting, too, was changed due to making the jump to DX11. Thankfully, KriS, one of the developers on the DX11 version was able to explain the graphical differences and why the massive performance increase is seen.

I was doing programming for DX11 Shadow Warrior version.

1. Foliage. We did replace foliage (grass, junk etc.) placement algorithm, so it distributed a bit differently now. Just as previously, foliage is placed randomly, so in some places it can be a bit less or more dense in DX11 version. We didn't decrease the draw distance nor average foliage density.

2. Lighting. All lighting changes were made by our graphic artists, who decided to improve looks of this game by tweaking lighting and post processing.

3. Shadows. Shadow filtering algorithm was improved, so now shadows have less jaggies and look better. It's mostly visible when you compare tree shadows from the beginning of the game.

4. SSAO. SSAO was totally rewritten. DX9 version had a lot of awful SSAO artifacts (especially in motion), which now are gone. Additionally it was tweaked to be softer and more realistic.

5. Performance. Performance is much better, because we got a bunch of new engine programmers who have totally rewritten the entire engine. It took us more than a year, to do that. Because of the sheer magnitude of changes we have introduced there will be inevitably some differences between versions, but we didn't cut anything, we just worked really hard for a long time just to squeeze every cycle we could.

I'm just glad that the developer was willing to respond, even to such negative comments. It's great to see them support Shadow Warrior with such tenacity and passion. Personally, I can only see improvements in the graphics, and it looks much better than it did. I'll have to re-run the Titan X benchmarks to see how performance has improved as well.