The developers that masterminded the genre defining Age of Empires are back at it again. Now part of BonusXP, this time they're focusing their efforts on changing the RTS landscape once again, with fast-paced mechanized combat. Introducing, Servo. 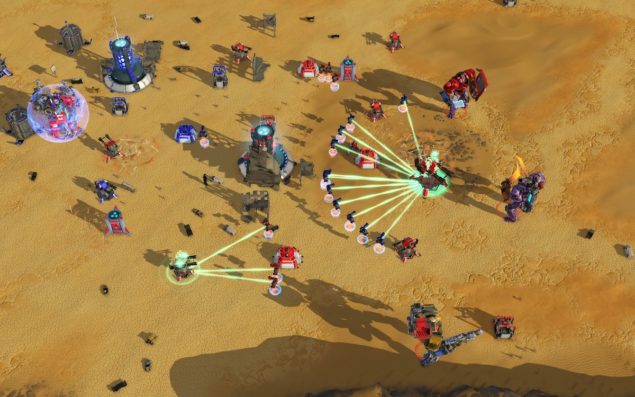 Age of Empires veteran developers are working on a new mech based RTS, Servo, that emphasizes quick and deadly rounds.

Servo is supposed to be an evolution of the RTS formula, moving from the long drawn out battles that begin with massive resource hoarding into quick and decisively savage battles. Instead, BonusXP introduces the mechanized unit so aptly named the Servo that forms the basis of the gameplay. No longer are resources the focus, but instead the gruesome battles.

Head to your Hangar to build out a team of rocket-blasting, missile-launching, Bloomspawn-stomping Servos. Start by picking a Servo class, such as the hard-hitting Juggernaut, versatile Champion, or armored Gladiator. With unique rigs and specialized abilities, each class produces Servos that are visually and functionally distinct.

In addition to a 25 mission long story mode that spans asteroids and, moons and distant planets, you'll be able to participate in a co-op mode so you can combine your Servo might to take on pretty much anything. And of course, what would an RTS game of this magnitude be without a PvP mode? Not much I reckon, so that indeed is included as well.

The following are the awesome things included in the co-op mode:

And of course, the PvP mode:

It's very unit and destruction oriented. It's also really a refreshing take on the RTS genre, but it isn't new. Mech Commander had very similar styles of play, where the focus was on the unit itself and upgrading its abilities and mechanisms. League of Legends is also similar in style with you controlling a few units and focusing not on resources, but on simply destroying the rest of the world. Sure, resources were valuable and you gained XP and other widgets when destroying things, but it was the combat that was keyed in on.

Even though it isn't really an evolution, it's certainly bringing back an RTS style that was quite enjoyable. I can't wait to take a look. It'll be on Steam Early Access later this spring for $20.