Seagate has decided not to give up on the hard drive industry and plans to offer HDDs with up to 50 Terabytes of capacity by 2026.

Seagate has stated they plan further develop their HDD market, showing a potential road map for the upcoming HDD releases, which includes both the 50TB in 2026 but also a 20TB in 2020. Earlier 2020 Seagate plans to release an 18TB hard drive that uses the same conventional magnetic recording (CMR) technology as its 16TB model.

"Today, Seagate is the only company mass producing 16-terabyte drives, which are the capacity benchmark for the industry. We are preparing to ship 18-terabyte drives in the first half of the calendar year 2020 to maintain our industry capacity leadership," Seagate CEO Dr. Dave Mosley stated at the Seagate earnings call (Transcript of the entire call is here). This shows that Seagate is dedicated to developing the harddrive technology further, as shown by the simple fact that the 50TB drive would be using the HAMR (Heat Assisted Magnetic Recording) which is when a small diode attached to each recording head, these diodes head heat up a tiny spot on the magnetic disk, which enables the recording head to flip the magnetic polarity of each stable bit for recording data. 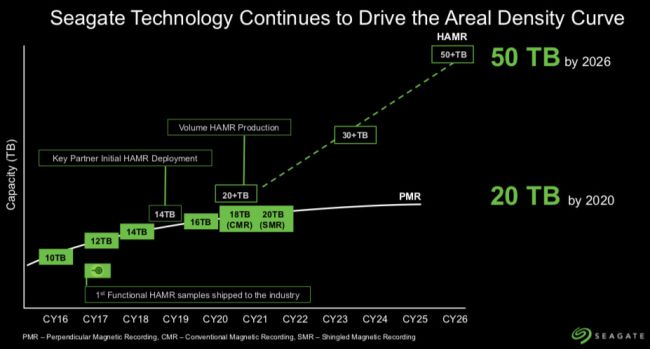 With both the falling cost of NAND Flash and Black Friday deals around the corner, these HDDs will have to be fairly competitive in price to even stand a chance against SSDs, Although these upcoming hard drives do offer more storage than any SSD on the market currently so for the data / / 4K video hoarder this might just be amazing news!