Scientists have been successful in producing electrical current from a microbial fuel cell. If stated in the simplest terms, it can be said that it is now possible to use bacteria that excrete electricity as an energy source. Well we aren’t short of bacteria in this world so why not put that to some use, right?
This cell is still yet a concept but it is now clear, that the future of batteries would be entirely different. Using rare earth metals as the core is often expensive and with depleting resources, we need new materials for power generation.

So how does this concept actually work?

The microbial fuel cell will use the process of excretion in bacteria to its use. Once the chemical energy in the form of food is broken down, electrons are excreted out. These electrons can then be used to produce electrical power. Scientists seem to be putting the law of conservation of energy to good use. However, the process is not so simple. For continuous production of electricity, a continuous food source must also be available. If the food stops, there would be no chemical energy to break down. For years scientists have had to inject an external source of energy but that sort of defeats the purpose. What’s the point of producing electricity if you have to spend more power for this generation?

A team from Iowa State University has found a solution to this problem. They have been successful in creating a 3D fuel cell that provides food to the microbes without a power source. The food they used was potassium ferricyanide. Using this new setup it was found that food can be supplied continuously for five days without any power or human interference. According to the lead researcher, Nastaran Hashemi, “All power created in this device is useable because no electricity is needed to run the fluids through the device. This is crucial in the advancement of these devices and the expansion of their applications."

In a regular battery, there are three parts, a cathode, an anode and an electrolyte. (The bacterial cell also follows the same structure.) Electrons enter the negative part of the battery (cathode) and are forced through the electrolyte towards the positive pole (anode). These electrons then flow out to power any other source, before they return to the cathode. This cycle of electron movements forms electricity. As long as the electrolyte is supplied, electricity can be produced. In the microbialm fuel cell, the electrolyte consists of bacteria called, Shewanella Oneidensis MR-1 and the ‘food’ or chemical energy input of potassium ferricyanide.

To make the flow of materials towards each other possible, researchers carved minute channels into the paper. These channels were able to direct the movement of the solutions owing to the fact that they are so thin. These channels have a similar action to how blood capillaries push forward blood. As the bacteria come into contact with the electrolyte solution, it digests the ‘food’ and breaks it down to produce electrons. The diagram below shows the set up. The yellow petri dish is the bacteria, clear dish contains the food. A PEM – proton exchange membrane, allows a controlled flow of electrons. 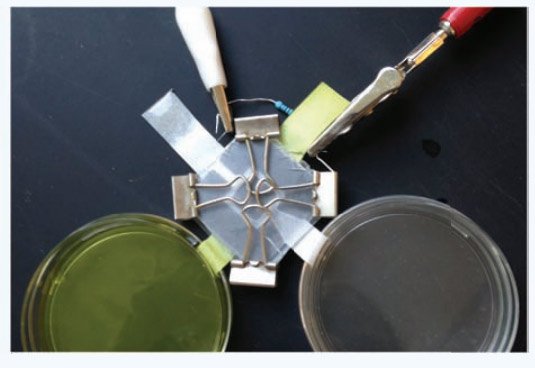 Once the five days were over, it was seen that a biofilm had formed on the carbon cloth that surrounded the PEM. This showed that healthy bacteria activity was going on and was converting the chemical energy to electrical energy. Apart from this it was also observed that the bacteria were growing healthily. Another diagram illustrates this function. The yellow represents the flow of bacteria and green the flow of food. 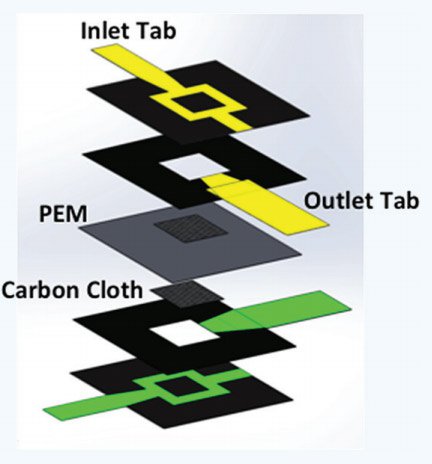 So, How efficient is this set up?

It was found that over the time period of five days, the cell had produced 52.25 microamperes of current and 1.3 micro Watts of power. In short, the microbial cell is capable of producing approximately 25 Watts of power per cubic metre of electrolyte (bacteria and food) added. That doesn’t sound very efficient does it? The researchers are now trying to use this basic concept to come up with a more efficient system. They are trying to use controlled environments to come up with optimum electricity production and at the same time, create a stable and consumer friendly device.

Waste paper plants are also looking into microbial cells for producing electricity. They aim to use the waste water as food and use the microbes to break this down into waste products and purify water. The electricity is a by-product of this reaction. Microbial fuel cells won’t be produced for a long while, but this is a promising start to a new era of power generation.