SanDisk has announced the industry's first 4 TB SSD this week, in a refresh of its Optimus MAX product line. The Optimus MAX is designed primarily for business use, with the manufacturer promising a higher performance at a fair price. 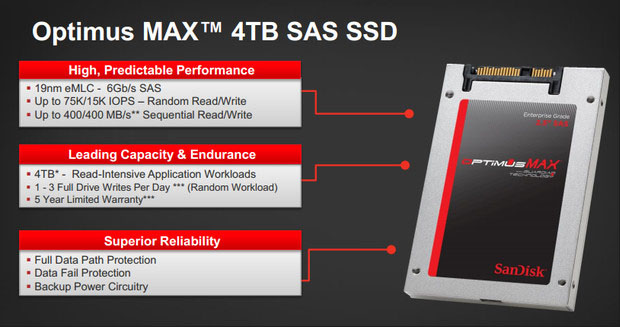 The 4 TB Enterprise-Class SAS SSD Comes in the Standard 2.5" range. SanDisk Also Hopes to Move Towards the 6TB and 8TB Marks.

SanDisk's new 4 TB SSD, part of the Optimus MAX  is the highest capacity 2.5 inch SSD released to date. It comes with a 6Gb/s SAS interface, with a 19nm eMLC. The drive is aimed towards read intensive applications. These include applications such as data warehousing, media streaming and web servers. According to SanDisk, the typical workload thought for the drive is 10% write and 90% read.

“Customers have been looking for a way to transition their data centers from HDDs to NAND flash, but have been forced to decide between cost and performance, or give up important functionality,” said John Scaramuzzo, Senior Vice President and General Manager, Enterprise Storage Solutions at SanDisk. “The Optimus MAX eliminates the need for compromises. We believe that the Optimus MAX will be a disruptive force within the storage industry, catalyzing many organizations to make the switch from their HDD-prominent data center infrastructures to SSDs.” This summarized SanDisk's aim of changing industry requirements entirely towards SSDs through elimination of costs and provision of higher performance.

According to Computerworld, the company also aims to move higher in capacity offered in it's SSDs. "We see reaching the 4 TB mark as really just the beginning and expect to continue doubling the capacity every year or two, far outpacing the growth for traditional HDDs," Manuel Martull, SanDisk's product & solutions marketing director, stated in an email reply to Computerworld. The new drive is capable of up to 400MB/s of sequential Reads/Writes. It also has the capability of 75K/15K random I/Os per second as seen in the graphic above. In total, four new data-center class SSDs were announced. These also include an upgrade to the company's Lightening Gen. II SSD which comes with a 12 Gb/s SAS. The new drives announced are expected to be available somewhere around the third quarter of this year.