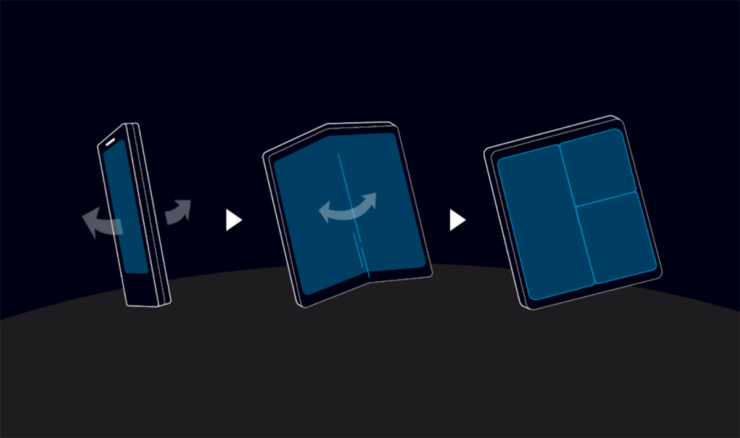 After what seemed like forever, Samsung finally unveiled a prototype device featuring the company’s Infinity Flex Display today at its Developer Conference in San Francisco, and it seems that the wait was worth it. The phone morphs into a 7.3-inch tablet when folded out and Samsung dimmed the light during the demonstration to protect the design elements.

The mobile device does not have a hinge like the ZTE Axon M, and is of the in-folding type. This means that it could be folded from top to bottom with the bigger display tucked inside. There is a second display with a similar dimension on the outside which could be used when you don’t exactly need the bigger one due to its massive size.

Since this is a new form factor, it runs the new OneUI, which will allow users to run three apps at the same time, thanks to the Multi-Active Window concept. Two apps could be displayed on the bigger screen in the inside, while a third one can run on the secondary display. This will enable smartphone users to get more out of a mobile device. Apps can also transition seamlessly from the smaller screen to the bigger display when the device is unfolded.

The early demo of the device at the developers conference would enable developers to make future apps according to the new form factor. Just having a new kind of hardware won’t cut it and to prevent the new phone from being relegated to a niche category, Samsung would have to convince users that the foldable display is incredibly useful for daily use and smartphone interaction. Google is also actively working with Samsung to support the device with Android and it has started giving guidelines to developers to leverage existing features to support the new form factor.

The device would reportedly go into mass production next month but there is no word on pricing yet. The finished product might be unveiled at next year’s CES 2019 trade show that will take place in Las Vegas.