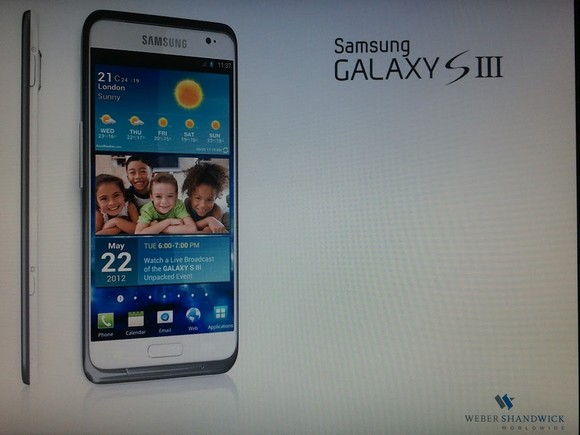 It appears that Samsung is again going to follow its magic formula by releasing is much awaited Galaxy S3 by the end of May and Early June as it did with Galaxy S2 last year which , as we know, brought unforeseen level of sales for the Korean Company.  Rumor has it that Samsung sent disguised prototypes of its Galaxy S3  to affiliate carriers to carry out network testing.  This testing has been going on for about 8 weeks and Samsung is being extremely secretive about it. That is because large scale manufacturers such as Samsung cannot afford to have specs of their latest product leaked to the masses as it would eliminate the 'wow' factor associated with such highly anticipated products such as the Galaxy S3.

The tech blogosphere is dealing with a tsunami of rumor and leaks relating to the Galaxy S3 specs and we bring you the most authentic one as of yet! Its impressive features include, if the rumors are to be believed, a 4.6-inch Super AMOLED Plus HD screen protected by Gorilla Glass, with 1280 x 760 pixels of resolutions having enough detail to put the best plasma screens to shame. The rear camera is expected to be a massive upgrade featuring a whopping 12 -megapixels with a 1080p video at 60 frames per second and a 2 megapixel front camera supporting video chatting. It is likely to be packed with 4G LTE connectivity and the Near Field Communication (NFC) feature. Storage is a bit of a letdown as it will probably feature a 16 GB of internal memory and with an expandable memory option of up to 32 GB. As expected, its OS will be the Android 4.0 Ice Cream Sandwich update with Samsung's latest version of TouchWiz software atop the user interface. It is estimated to weigh around 125grams and measure 131 x 64 x 8 mm. However, its most notable feature is its processor. Samsung have ultimately decided to power its latest phone by the latest Samsung's 1.5 GHz Exynos quad-core processors and a 2GB RAM slotted in.

In conclusion, we can expect Samsung Galaxy S3 to be an extremely fast smart phone possessing all those features we can expect from any latest smart phone. However, it must be stressed that most of the information we have regarding the Galaxy S3 is based upon the rumors circulating the internet which inherently makes them somewhat unreliable. But one thing is for sure, the release of the much anticipated, 'iPhone killer' Samsung Galaxy S3 is just around the corner and all you Samsung and Android fans would not wait to get your hands on it.