Samsung Has Reported To Cut DRAM Output, Which May Lead To Spiking Of Prices

The largest manufacturer of DRAM Samsung is going to cut production of standard RAM in order to focus on the mobile side of things. The tech giant has reported to reduce this quarter’s production by an astounding 30 percent thanks to the large degree of orders the company has received from Apple to incorporate mobile DRAM in to the upcoming iPhones. That being said, we could be witnessing a spike in regular DRAM prices in the foreseeable future. 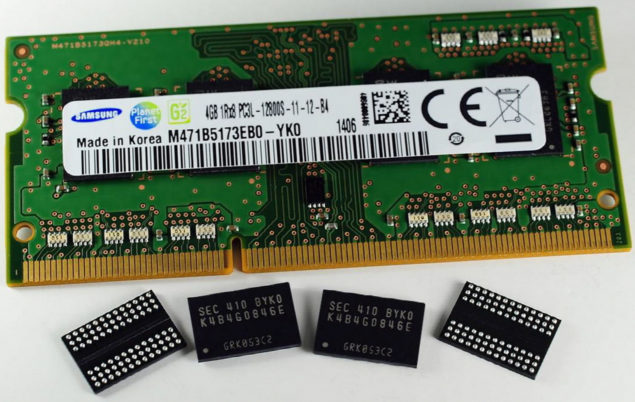 Increasing Of DRAM Prices Will Stand To Benefit Companies Like Micron And SK Hynix, Which Were Suffering Thanks To Samsung’s Unbeatable Prices

Apple’s original mobile DRAM suppliers were SK Hynix and Micron, but being unable to meet the quota of mobile DRAM has forced the Cupertino tech company to switch its primary mobile DRAM supplier to Samsung. At this current point, it is unknown if Samsung is going to make price cuts in its mobile DRAM prices in order to secure future orders, but CTimes reports that increasing regular DRAM prices will stand to benefit companies like Micron and SK Hynix, which were already suffering due to Samsung’s unbeatable rates.

According to the source, the South Korean tech firm has already given OEM the heads up that at the end of next month, it will begin to ship out US$20.50 to $21 DRAM modules, which have already been recorded as the lowest prices for this quarter. The company will be putting extra amounts of effort in ensuring that quantity of its 8GB LPDDR4 mobile DRAM are at par with companies’ requirements.

Additionally, the extra effort put in could also be able to secure a future for Apple’s next generation mobile products. Samsung and TSMC are already having an extended race to see which company will be able to reach the finish line of the 10 nm FinFET manufacturing process. If Samsung is able to price its mobile DRAM accordingly, then Apple is not the only company where it could secure future partnerships.