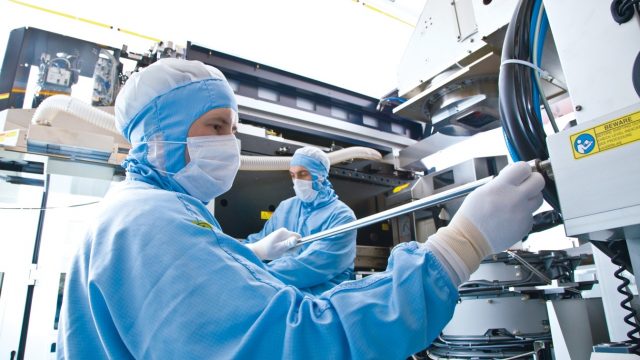 Samsung and ARM just made a big announcement today. The Korean tech giant's foundry business was off to a slow start with 7nm, allowing TSMC to take the lead instead. However, Samsung's now eager to pick up the pace and has made a slew of announcements throughout the course of this year.

The latest of these is the announcement of 7nm EUV in June, where the Korean tech giant officially detailed its plans for the next generation of the lithography-based process. Now, Samsung and ARM have announced their collaboration for 7LPP (Low Power Plus) and 5LPE (Low Power Early) nodes, with one of these to cater to the Cortex A76. Take a look below for more details.

The mobile computing landscape has finally started to take real and practical steps towards change this year. ARM launched the Cortex A76 CPU designs last month and with it, its intention to seriously enter the personal computing market. The ARM Cortex A76 is a major architectural jump over its predecessors and offers major performance gains of up to 35%.

Now, ARM's found a foundry partner for its latest core designs. ARM and Samsung have announced their collaboration for the Cortex A76 and Samsung's 7LPP and 5LPE manufacturing processes. The pair will utilize ARM's Artisan IP Platform. This, combined with the Artisan POP designs for core-hardening will allow the Cortex A76 to achieve frequencies in excess of 3GHz.

Samsung's partnership with ARM is big news and looks like the company's resources have come to its aid once again. It will provide Samsung with a lot of knowledge and expertise and will also ensure that the company is at the forefront of ARM's attempts to penetrate the low-level computing market.

ARM's Artisan Physical IPs consist of both Logic and Interface IP. Logic IP enables low power and low leakage along with enabling high-speeds necessary for strong performance. Interface IPs, on the other hand, are designed for customization and the ability to cater to different system level requirements. Samsung has also provided details for Physical IP that will be used with its 7LPP and 5LPE, on ARM's Cortex A76.

This includes HD logic architecture, memory compilers, and 1.8V, 3.3V GPIO (General Purpose Input/Output) libraries. Samsung's partnership with ARM marks a much-needed win for the foundry, who is desperate for customers. All major chip brands are heading to TSMC's way this year, as the Taiwanese fab has commenced manufacturing of its first generation 7nm node, also dubbed as the N7.

Samsung will enter IP validation for 7nm on EUV in the first half of 2019, and so far the only processor that will use the Korean fab's first generation 7nm process will be the successor of the current Exynos 9810. This, will naturally once again put Apple in the lead as Cupertino A12 processor for the 2018 iPhone lineup is expected to be manufactured on the first generation 7nm node from TSMC. Thoughts? Let us know what you think in the comments section below and stay tuned. We'll keep you updated on the latest.