Nintendo Switch (also available on PC, PlayStation 4 and Xbox One)

X-Morph: Defense is a twin-stick shooter and tower control hybrid. Aliens are invading the earth, and you aren't defending the planet against them, you are the aliens for once. Invading the Earth in critical cities and countries around the globe, you set up control towers with a thick metal sheen slowly covering the planet's crust. You're here to sap away vital resources and blow away any resistance the humans give you. This is a hostile takeover, and we don't want prisoners.

After you touch down a core and plant it into the ground, enemy troops will begin to swarm the stage. You control a high-tech alien ship and must destroy the troops before they reach the core by any means necessary. You'll fortify the core by building attack towers which will shoot at any enemies within range, but not only that, you'll be connecting attack towers through electric fences.

The fences change the entire game. Through the use of fences, you can force troops to take long, roundabout routes to get to your core, giving you more time to kill them off, and much more room to place dangerous towers with guns on top. You can close off roads entirely, but you can't entirely close off the path to the core. I guess that would make things too easy, but it's a bit odd that the aliens want to give the humans a chance at all.

It takes some experimentation in each stage to get a long path working to usher through troops to their demise but finding it feels satisfying without even having to kill any enemies. It's satisfying in its own right, which is a wonderful thing, though placing towers using the Switch controls feels awkward at times. It's this that tipped me off to X-Morph: Defense originally being a PC game, where a mouse and keyboard would, of course, iron out these issues entirely, though seeing as twin stick games are undoubtedly better on a controller, perhaps that would cause other issues.

As you filter troops through slowly you'll collect their debris and other resources to build more towers, soon moving on to mortars with a larger range, or anti-air towers to take out pesky bombers and jets. Humans will stop at nothing to destroy the alien cores, but luckily you've got more than enough weaponry to fend them off. And what's nice is that it's never overwhelming. At the beginning of each stage, you choose how to spend your technology and upgrade points, giving you more powerful towers, better at destroying certain types of enemy. It's a slow rollout of powers that you choose, so you're never overwhelmed with too many options.

Of course, X-Morph: Defense is a twin-stick shooter too, and that works well. You will also slowly unlock and upgrade more types of gun, so as you get further in the game, your armory as a whole will grow. It works fine as a twin-stick shooter, but because it's also a tower defense game, enemies feel like they have too much health. If you've got a sensible placement of towers, then your shooting is just something you do to kill time, until it comes to tougher boss monsters. Though, that's not to say you won't be saving the day with last-minute shooting when enemies get near your core a few times.

It eliminates all of the frustration you usually find with tower defense games. This isn't tedious since you can constantly be building or shooting. The setup phase is actually really satisfying, and the way you can influence the paths of your enemies is seriously smart. Though, this is more of a tower defense title than a shooter. The shooting is there, but just feels added in so there's less downtime and waiting around. It all works, it's smooth enough, just never particularly exciting. The devs know this, which is why you can enter into Ghost mode, where you fly faster and become invisible. Here you're essentially a mouse cursor that places towers. You're also invincible in this mode, although you can't shoot.

Game breaking? Of course not. Because your health and survival don't matter as much as the core does. In fact, if one wished, they could stay in Ghost mode all the time, simply building towers and watching a tower defense game play out. Although that's certainly not the most exciting way to play.

If I'm to make a complaint, it's that the Nintendo Switch version of X-Morph: Defense has launched with four pieces of DLC. This game has been out for over a year on PC, and some bundled DLC wouldn't have gone amiss. Sadly, even if you buy the game, there will be several big options on the main menu you'll still need to pay for, and that always stings a bit.

Despite that minor frustration though, X-Morph: Defense feels great to play and manages to breathe life into the mostly boring tower defense genre. Great stuff.

Reviewed on Nintendo Switch (code provided by the publisher). You can purchase the game for Xbox One via Microsoft Store, for PC via Green Man Gaming or for PlayStation 4 via PlayStation Store. 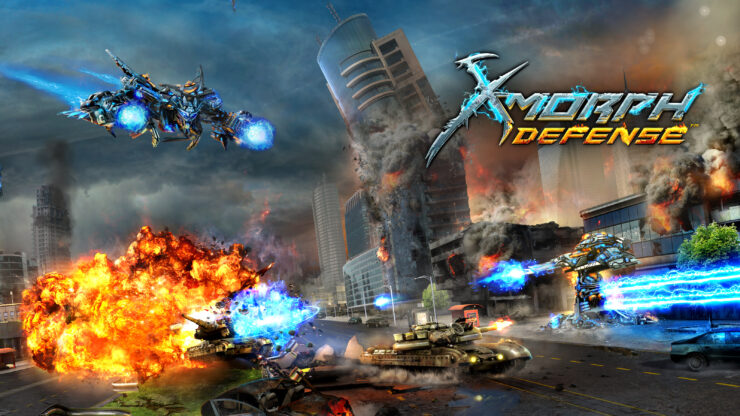 X-Morph: Defense fixes the tedium of tower defense games by blending it with high-octane twin-stick shooter gameplay, and the end result is great. Definitely worth playing portably on Nintendo Switch.