It’s been too long since pro wrestling fans last had a true championship-caliber WWE game. After a hot run in the late 90s/early 2000s, WWE games began to run out of gas. They were still fun enough, but the formula was becoming tired. When 2K Sports assumed the WWE license from the doomed THQ in 2013, many hoped the series would stage a dramatic comeback, but so far that hasn’t been the case.

From WWE 2K14 on, the series has been hobbled by flawed in-ring mechanics, missing features, and a general feeling of complacency. 2K knows wrestling fans are a captive audience and have mostly settled for “good enough” with their last four WWE games. Does WWE 2K18 break this trend, or does the franchise remain mired in the mid-card? 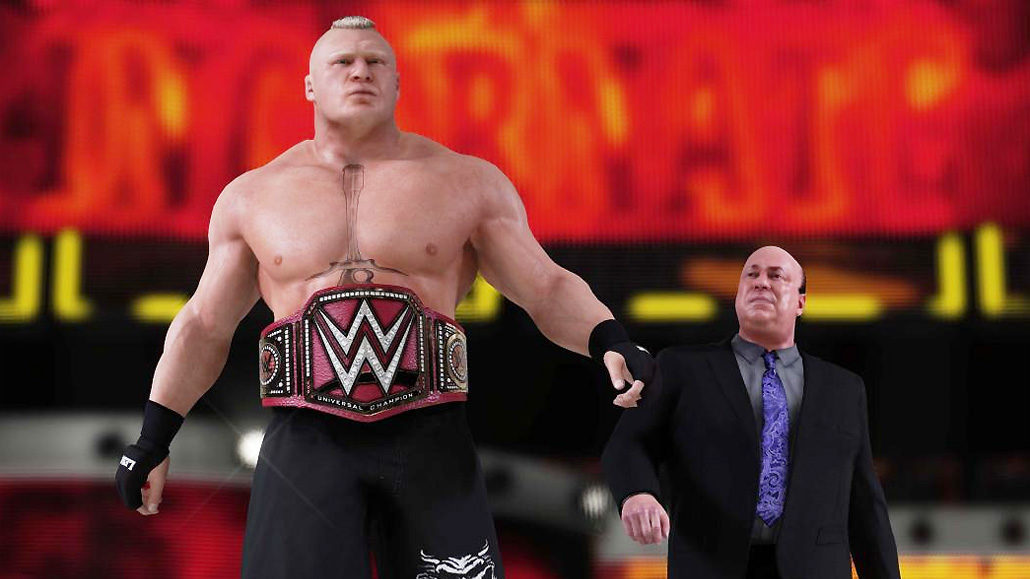 Unfortunately, WWE 2K18 stumbles right out of the gate. Half a decade in, developers Visual Concepts and Yuke’s are still struggling with their in-ring fundamentals. The basic punch, kick, normal grapple, strong grapple system that’s been around since the mid-90s continues to work well enough, and you now have more options for dragging opponents around the ring, but the game remains far too fixated on reversals.

Reversing a move is a simple matter of tapping the right shoulder button at the proper moment, but simple doesn’t mean easy. You need to be very precise, and the timing changes depending on the move you’re countering. Really, the only way to get good at reversals is through rote memorization. And you will need to get good at reversals because they’re the only way to alter the course of a match. Winning and losing in WWE 2K18 is almost entirely about how accurately you can tap that counter button.

WWE 2K18 desperately needs a block button or a greater emphasis on stamina (there is a meter, but it’s almost impossible to deplete). Some other way to turn the tide. These are basic things every combat-based game should have, and yet they’re still missing from WWE 2K18. And the frustration doesn’t end there – WWE 2K18 continues the series’ obsession with annoying meters and minigames, which reduce chain-wrestling, submissions, and ladder matches to bad Mario Party minigames. 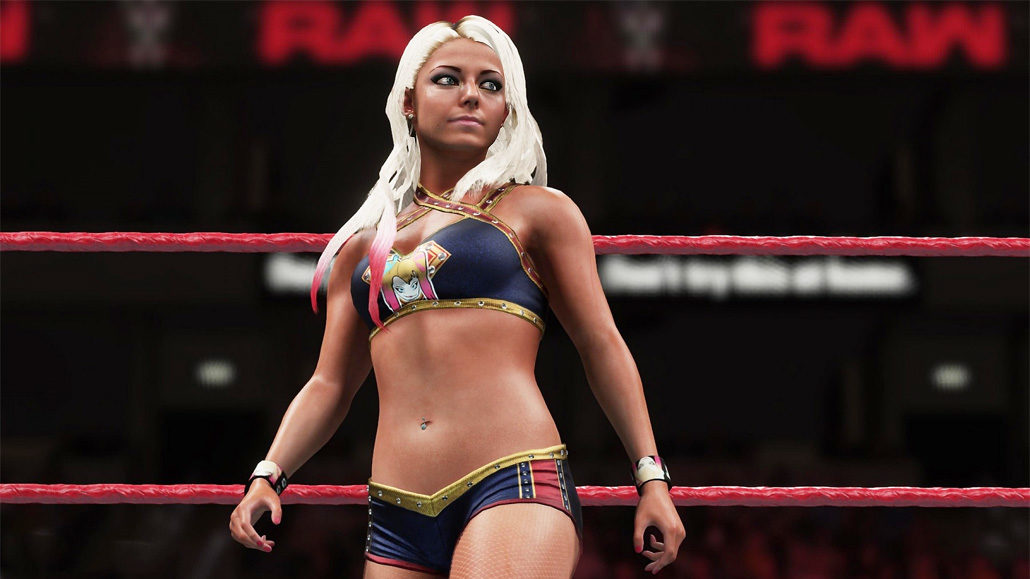 At least the in-ring action looks better this year. While wrestler models are about the same as ever (which is to say, wildly inconsistent), improved lighting, shaders, and animation makes them look a bit more lifelike. Sadly, the effect is undermined by glitches that can suddenly turn Bayley into a bug-eyed Medusa, or John Cena into a writhing, teleporting mass of polygons. The WWE 2K games have always had issues with polish, but this year’s entry feels particularly rough around the edges.

WWE 2K18’s awful-as-always audio also deserves special mention. The commentary is every-so-slightly improved by replacing the tuned-out JBL and Jerry Lawler with Corey Graves and Byron Saxton, but too many lines are still robotic and/or any ignore any sort of context. Sorry Michael Cole, that 2-minute Heath Slater/Curtis Axel match was not a “Classic we won’t soon forget!” And the soundtrack – good Lord. “Down with the Sickness” by Disturbed? “You Never Met a White Boy Quite Like Me” by Kid Rock? A random Blues Brothers song? Who the hell chose this stuff? Wait, it was The Rock? Well, we’ve officially found the one thing he can’t do.

Thankfully, as long as you mute the soundtrack, you should have some fun with WWE 2K18’s extensive Creation Suite. Not a whole lot has been added this year, but that’s fine, as WWE 2K17 already had some pretty impressive creation tools. Once again you can make your own superstars, move sets, title belts, shows, and arenas, and now you can even customize your own match types.

I judge a create-a-wrestler mode by how ugly and/or ridiculous I can make my characters look, and by that measure, WWE 2K18’s editor is a roaring success. Every minor facet of your character’s face and body can be tweaked, and just messing around I ended up with something that roughly resembles a zombified version of 80s wrestler, Kevin Sullivan. Look upon my masterpiece and weep. 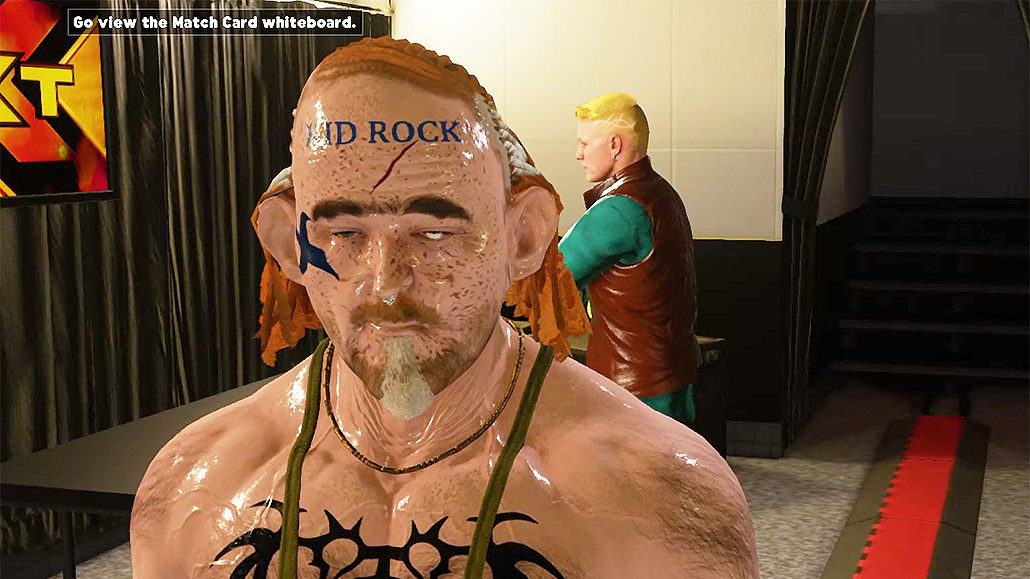 One downside to character creation is that it can be incredibly time consuming, particularly if you’re the obsessive type. WWE 2K18 adds a new character creation wizard, but it over-simplifies things -- using the wizard takes around 10 minutes while tinkering with every minor detail can easily take two or three hours. There needs to be some sort of middle-ground. Of course, if you don’t have time to make your own characters, you can always download other players’ creations, which are guaranteed to be better than anything you might cobble together. I’ve already grabbed a nice collection of favs, including Kairi Sane, Adam Cole, and Matt Hardy.

Another downside to character creation? There just isn’t much to do with your roster of custom monstrosities. Sure, you can play exhibition matches ‘til your thumbs bleed, but MyCareer mode is once again a bust. The whole production feels cheap – there’s no voice acting, cutscenes are awkward, and none of the wrestlers feel like individuals. For example, here’s unwashed hillbilly Luke Harper spouting generic lines about the value of a good makeover. 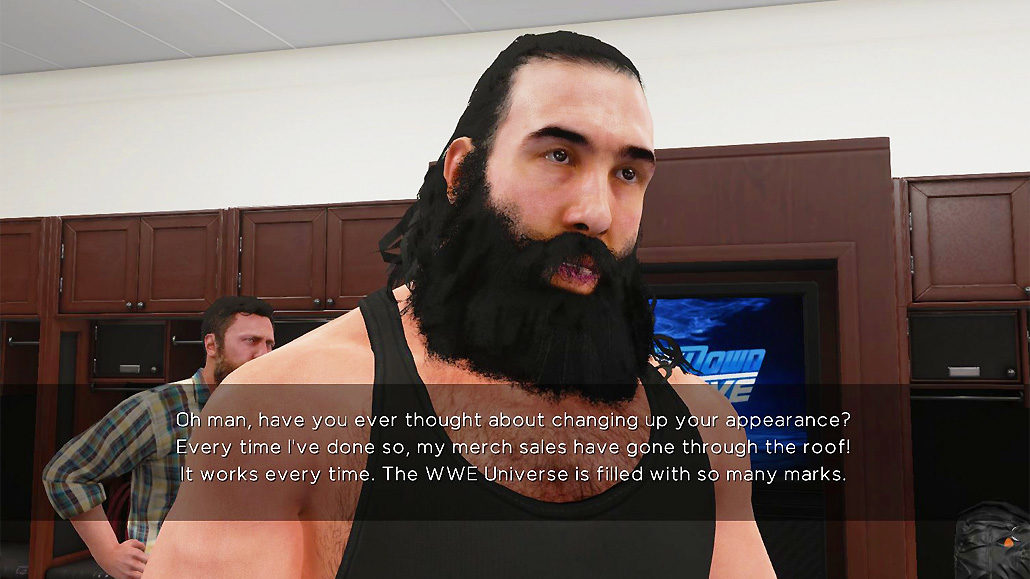 This year MyCareer adds the ability to wander around the backstage area between matches, which is neat at first, but like The Neighborhood in NBA 2K18, the charm wears off fast. MyCareer is too drawn out, without any real feeling of accomplishment.

There’s simply no reward for working through MyCareer -- you have to make a wrestler specifically for the mode, and your options are very limited. Most of the gear and moves have to be unlocked by spending Virtual Currency (VC) or opening loot boxes. The idea is to grind for stuff and gradually improve your guy, which is fine in theory, but most of the things you unlock are already available outside of career mode. When you create a regular character to use in exhibition matches, you have full access to all the gear and goodies. Rather than let you create a good character and guide them to superstardom, MyCareer artificially hamstrings you, asking you to spend dozens of hours training up a jobber.

The makers of WWE 2K18 seem to have focused their energies on the new MyCareer companion, Road to Glory. This mode lets you compete online with your MyCareer character and earn extra VC, experience, and the chance to compete in pay-per-view matches for rare gear. Road to Glory is more fun than career mode itself, but I still found it difficult to care about. I was still grinding for stuff I already had. 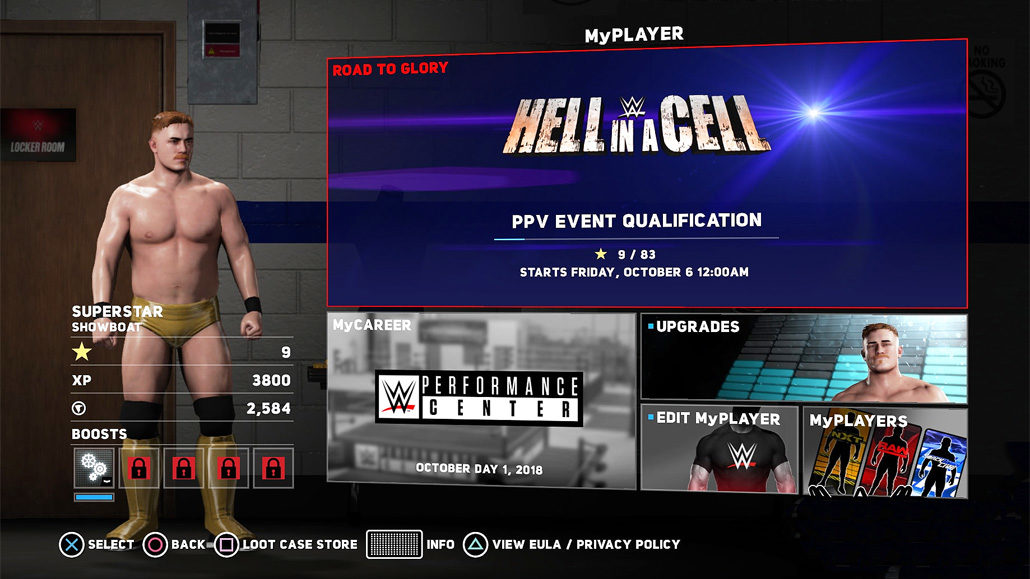 At least there aren’t any microtransactions shoehorned into MyCareer/Road to Glory, although it feels like the modes were made for them. Did 2K get gun shy and take them out at the last minute? Loot boxes are expensive, and earning VC is a relatively slow process – I’m no fan of microtransactions, but WWE 2K18 makes unlocking stuff a chore without providing any means to speed things up.

If you’re not into the grind of MyCareer, all you’ve got left is WWE Universe mode, which isn’t any more compelling. Essentially WWE 2K18’s version of the GM modes from other sports games, Universe allows you to book your own cards and simulate or play out an entire year of programming. Sounds good, but the concept is crippled by two factors – one, you can’t dictate outcomes when simulating matches, so you can’t sit back and play Vince McMahon, and two, the business side of wrestling isn’t represented, which means there’s no consequence to anything you do. Want to immediately make Curt Hawkins World Champion without any build? Go ahead, it doesn’t matter.

Universe mode mirrors the WWE 2K18 experience as a whole. Hypothetically, it provides nearly endless replay, but there’s no real structure. WWE 2K18 takes the “make your own fun” approach, which some may appreciate, but left me unfulfilled. The “E” in WWE stands for Entertainment, and I wish this series would put a bit more effort into providing it.

This review was based on a PS4 copy of WWE 2K18 provided by publisher 2K Games. You can buy the game on Amazon.

This franchise is almost out of chances. This is the fifth WWE game from 2K, and they’ve still only figured out one of the three ingredients. WWE 2K18 is great if creating wacky wrestlers is all you’re interested in, but those looking for solid in-ring action or a compelling career mode will be let down yet again. If WWE 2K18 were a wrestler, it’d be Jinder Mahal – all flashy show muscles, no fundamentals. I realize a lot of hardcore fans will buy WWE 2K18 regardless of reviews, but if you actually want the series to change, it might be time to tap out.