Have you ever been to the Caribbean or seen pictures of the Caribbean Sea? The clear as glass water, the beautiful coral reefs all lit perfectly by the overhanging ball of fire. It's impossible not to immediately be gripped by it, the prospect of that beauty surrounding you while you take in everything the area has to offer. Windbound is that picture.

"Windbound isn't a picture" I hear you say. You're right, it isn't. This is theoretically a piece of interactive entertainment, only it's sorely lacking on the entertainment part of that title. Before we get into it, I'm not going to say Windbound is bad, it isn't. It's just really, really, disappointing when I think of the promise it had during my preview.

The Lord of the Rings: Return to Moria Gets New Screens on Durin’s Day

So what is Windbound, what is the story? Honestly, I haven't got a bloody clue. The best I could figure out is that a giant Omastar pops up and cuts Kara off from the rest of her tribe. She's thrown into the sea and transported to... somewhere to do... something? You know what, maybe I'm a little too thick now, maybe games have spoon-fed stories to me for that long that I'm no longer able to understand the Hieroglyphs found in an Egyptian tomb, but that's what this game is asking of me.

In between what is essentially a brand-new Bayeux Tapestry at the end of each of the five stages, and cryptic bits of writing here and there, it's down to you to figure out the whole meaning behind the game. So I do have a few ideas. It may be a game about the hubris of man trying to conquer nature, only to find out that nature has a giant mollusc to see you off. It also may simply be that Kara's travelled to Purgatory and her only way out is to return some baby shellfish to their mother.

Or it's just so needlessly abstruse that I honestly don't care anymore. Two playthroughs and I'm none-the-wiser, so I give in. Kara isn't personable, she certainly doesn't come across as a "powerful force in the world of Windbound". She's just somebody who can build a ship, use a bow or a sling, or a spear. She's hardly Robinson Crusoe. I don't get any sense of personality. The only emotion you get from her is surprise. Wait, no, she shows a bit of happiness just before the end credits. Not only am I not emotionally invested in her journey, neither is she.

While we're on this, there was all this talk in the preview about how the game would force you to look at your moral compass, that you wouldn't necessarily need to be a hunter in this world. Technically this is true, you can just pick berries & mushrooms and eat them, but not fighting is a very difficult prospect when just wandering through islands or sailing the sea will see you mobbed by some very violent animals.

Where were we? That's right, the story is a bit crap. Well, at least the way it's presented is a bit crap. Fortunately, the gameplay isn't and tries to make up for it, but sadly there just isn't enough here to carry the full load. What is the gameplay? Simply put, it's a survival game with tasks that amount to more than "survive". You want to survive, of course, because if you don't and you're in survivalist mode the game kicks you right back to the start of the first level with just whatever items you had in your hands. In storyteller mode you keep everything, and your progress is saved.

What are these tasks? Well, actually - and here's the problem - it's the same task repeated five times. You wake up in a new area, a circular bit of ocean with some islands, and you have to find three towers on whichever random island they happen to be on and activate the magical molluscs at the top. Once all three are activated, you go to skull island, activate the shrine, and get teleported to what I will now call the Styx. Once here, one of the five tapestries will reveal a part of the story. You then sail through some choppy waters to spend some of the sea shards you've obtained on perks that will help you out later, before entering a portal to get to the next level.

As I've said, this is repeated five times. Each of the five stages unlocks a new biome type for the islands that appear, some new creatures and an increasingly larger map. Exploration is pretty enjoyable here if only because navigating the choppy waters can add a real level of tension. Some of the creatures you will find yourself fighting can be truly challenging, from giant sharks to the poisonous Pondwompers. It's just a shame it's a bit monotonous for the first two stages. At least your exploration is rewarded by health and stamina boosts, as well as more currency for buying perks.

This builds into the crafting system quite neatly. While it isn't the most extensive, it doesn't need to be. Grass, Bamboo, Wood, and Metal. Those are the materials and metal is the best. Well, metal and wood. You'll eventually be crafting metal arrows for your bow (there are some mystical elements too), ready to take down a giant sandworm. Then make sure you craft some metal plating for your wooden boat hull to help you survive the shark.

You'll also be looking constantly at crafting potions and cooking food. Sadly, in a problem found in most survival games, the dreaded hunger meter is ever-looming. Go too long without eating and your stamina cap will shrink. The problem is that food spoils very easily. You can cook it to extend its life or craft a small food bag that extends it, but you'll find yourself eating all the time because Kara has the metabolism of a hummingbird. Casey Webb would struggle against her. This needs balancing.

About balancing, something is throwing the game way off balance because I've had it crash on me no fewer than five times. That's not including the four times it didn't even have the decency to close properly, freezing and then crashing. Some crashes have been at the end of a stage too and if you haven't saved, which is always manually, be prepared to be angry. I've had bugs where, upon loading a save, my ship has suddenly been sat on a rock rather than in the ocean where it was. I've had invincible monsters, stuck on 0 HP, where my only option was to run away.

I need to throw some unequivocal praise at Windbound over the aesthetics of the visuals and audio. Windbound is beautiful. The colours are vivid, the characters, creatures, and the world are attractive, it's a joy to see. Even more so when the water starts rising, the wind letting you ride the crest of a wave. That or some of the islands, those with the pink trees, that are brilliant to look at. Also, the audio is still as brilliant as I said in my preview. It's exemplary throughout and I still want the soundtrack.

Windbound could and should have been so much better. The story is non-existent. Exploration is rewarding enough, but still dull for the first third of the game. The other issue is that the game is just too repetitive, though still at least enjoyable to observe thanks to just how good the game looks and sounds. The crafting system is decent, particularly for your boat, while combat is simply adequate. Honestly, the game just bores me and it's so clear it could be better.

I'm going to finish this by pointing out one simple thing: the game doesn't even get the ending right. The only way to restart the game with your current character is to be on survivalist mode and once you've completed the game, load it back up and get killed. It will kick you back to the start of the first stage. Even No Man's Sky got that part right when it was released, kicking you back to the start. 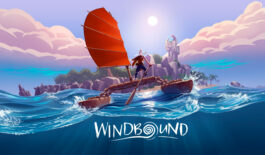 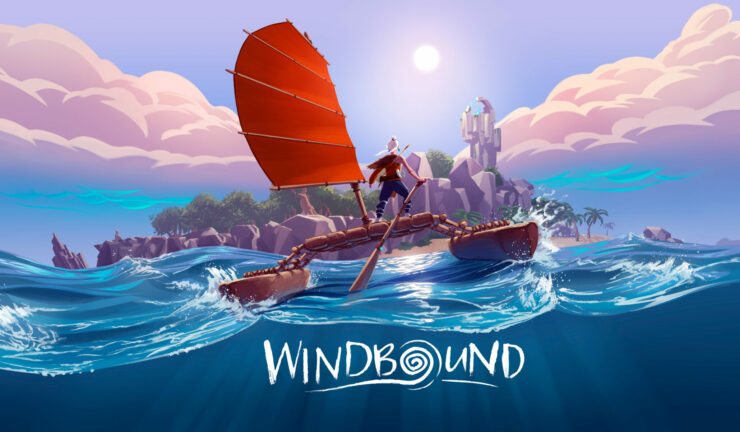 Windbound wants to offer a deep story backed up by rewarding exploration, crafting and survival in a beautiful open world. However, it only really lands the beautiful open world part of this, with it getting close to the line with the rewarding exploration and crafting aspects. The problem is that for all it wants to offer, Windbound is just too shallow and repetitive and offers no real replay value.