Western Digital has released their updated WD Black SN750 NVMe drive and now it comes with a machined aluminum heat sink courtesy of EKWB that should aid in keeping the drive below the thermal throttling point regardless of the workload. One of  the unique aspects of the WD Black SN750 NVMe drives is the fact that it is 100% built in house, so nothing is sourced elsewhere and that allows Western Digital to control their entire product stack to fine level that puts them on a competitive level with the other major players in storage.

They seem to have made a solid transition into the NVMe world and are competing well last year in that WD NVMe Review. We have already taken a look at the standard WD Black SN 750 1TB NVMe SSD and found it to be very competitive at the time, but does the heat sinked model change the game, does it add meaningful value, or should you save a few bucks and compatibility woes by going with the standard version?  Those are the questions we hope to answer today.

Well, Western Digital stepped up their packaging game with the WD Black SN750 w/HS over the regular variant with a nice foam insert rather than the usual plastic holder they have gone with for their other NVMe drives.  The Heatsink on here is more than just the usual EKWB M.2 Heatsink that you can add to an existing drive.  Fully encasing the NVMe drive and screwed together we took Western Digital's advice and didn't disassemble the drive for fear of damaging it, perhaps someone else was a bit more zealous than me in their review to see how everything underneath is handled. But the heatsink itself is finned rather than just a block of aluminum strapped to a NVMe drive and called a day.  Fitment can be an issue if your motherboard has a non removable drive heatsink attachment, Western Digital has taken the time to start compiling a list of compatible motherboards that the drive is confirmed to fit.

Our test bench is now using the EVGA Z370 Classified K paired with an Intel Core i9-9900K at 5GHz paired with 16GB DDR4 3200 RAM and decided to go sans dedicated GPU.  The reasoning for this was simple as I had to remove the GPU to access the secondary m.2 slot so that I could run the tests.  Before starting the tests I loaded the NVMe drive up to 60% capacity so that the testing would not be run on a clean empty drive.

Once again the WD Black SN750 w/HS is biting on the heels on the Samsung 970 EVO Plus to the point of being indistinguishable in real world usage  Sequential Reads are showing strong competition with only Sequential Writes falling a bit behind.

Once again accros the AS SSD suite we see a very similar story unfold with the WD Black SN750 w/HS maintaining a very competitive stance against the blazing fast Samsung 970 EVO Plus.  There are times in the charts that it even bests the furious 970 EVO Plus.

The SSD Dashboard for the WD Black SN750 is actually a bit more useful that I had imagined it would be.  Expecting nothing more than a few toggles for checking diagnostics and the ‘gaming mode’ I was pleasantly surprised to see multiple tabs and so much data given right off hte bat, of course with a helping of WD ads on the sidebar.  The front page gives you that ‘gaming mode’ option right away if you so wish to keep the drive from going into low power state so that it’s always at full tilt.  Capacity numbers are right there and a life meter for your drive should help you keep calm down the road if you ever become concerned with the health of your NVMe SSD.

The Performance Tab is just a constant graph showing Transfer Speeds and IOPS, this was very useful for validating while running the above benchmark tools. Speaking of Tools, the Tools Tab brings all the functions like firmware updating, software updating, diagnostics, and clearing the drive all under one spot. The settings tab lets you choose whether the application starts with windows or not.

Thermals were not quite as easy to test as I had imagined, but I recorded the results that I found from the test I did.  I performed a move of 320GB of data files from the Crucial P1 OS NVMe drive that the systems is running to one of the new drives that took a little while to complete so the drives would have time to heat up.  There was no active airflow outside of a ceiling fan in my office just to keep as little interference as possible.  While the Samsung 970 EVO Plus reported multiple thermal points in HWINFO64 the WD Black SN750 w/HS reported only the hottest point which I was informed was taken from the hottest NAND package, so that's the reading I took from the Samsung drive as well.  There's always the question of cooling a SSD and whether you should do it, well EKWB wrote up this excellent blog post about the topic and interestingly enough their results show keeping the NAND in the 50s or higher (right where the heatsink model sits) to have no negative results.  So staying in this range should have no negative long term effects while still being able to avoid those throttling temps in higher stress situations.

At the end of the day Western Digital has taken the already great WD Black SN750 and beefed it up a bit by strapping on a wonderfully crafted EKWB heat sink for those of us who just like those kind of things.  Sure it offers some functional benefit when used in settings where thermals are a concern, but it does limit the applicable motherboards that it can fit into.  The real drawback is that it's functionally the same drive as the one without the heat sink and performance did not change in any meaningful way under typical workloads.  It's going to be hard to just a performance reason to spend the extra over the base WD Black SN750 NVMe drive, but it is very competitive with the Samsung 970 EVO Plus and does look fantastic if you're into aesthetics as well as performance.  It's good to see that there are options at this price and performance level so that there isn't always a clear way to go, makes shopping more interesting that way. 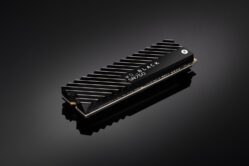 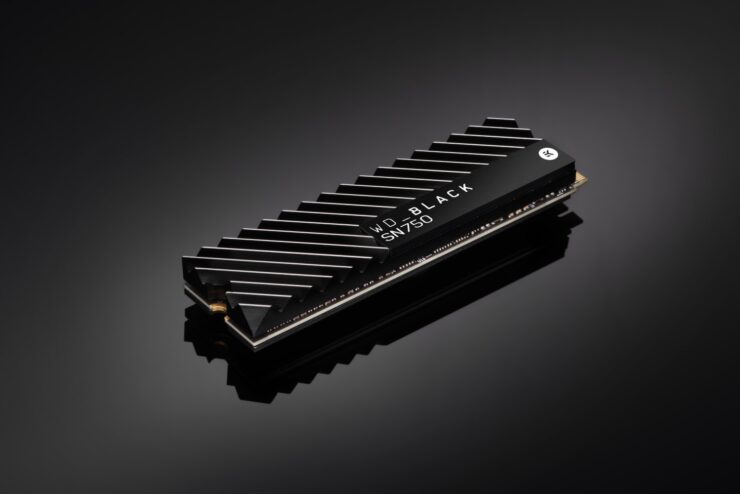 Fast and competitively priced high end NVMe SSD with a solid software suite and a very attractive heatsink to accompany it.