Western Digital is a name very well known in the storage world, and have been around for almost 50 years, though almost all of that time was spent selling mechanical storage, over the past 10 years or so, they've been using the color-coded branding, which has been quite successful for them. Blue for consumer performance, Green for cheaper more energy efficient drives, Red for NAS uses, Purple for surveillance, and Black for high performance. Western Digital for simplicity's sake for consumers has kept this branding, with Green drives making up the budget segment, Blue making the consumer grade performance and Black drives being NVMe and the highest performance possible.

The drive actually came out earlier this summer and was faster than even the Samsung 960 Evo. This is due to their new controller which was designed in-house and puts it up with the likes of Samsung, Intel, and Toshiba as companies that have produced their own controllers, and flash.  That being said, the drive actually uses Toshiba's 64-layer BICS TLC NAND, which has been quite popular, and in almost every drive I've reviewed this year.

Western Digital packages the drive with a nice outer carton that provides an explanation of the drives form factor, capacity as well as rated speeds and 5-year warranty. once you open up the outer carton, you are greeted by a plastic clamshell which is quite familiar to me by this point. It also packs a small booklet with some installation information as well as details on the warranty.

I use a Ryzen test bench for my reviews, since most other websites test with Intel mainstream platforms, I personally think this is useful for all of those users who are using AMD's Ryzen CPUs and AM4 socket motherboards to get a good idea of what kind of performance they should expect.

For the NVMe based SSDs, I've decided to double my workload by doing all tests with the OS installed to the drive tested, as well as doing 50% full benchmarks, adding Anvil Storage benchmarks and a transfer test.

I have also decided to test NVMe based SSDs entirely separate to SATA based drives and as such we will not include the data for those drives here.

Crystal Disk Info is a widely used tool for displaying the characteristics and health of storage devices. It will display temperatures, the number of power on hours, the number of times it has been powered on, even informing you of the firmware version of the device.

Looking at the results here, it's an absolute blowout. In the larger reads and writes the WD Black drive is around twice as fast to 2.5 times faster in the tests, though inexplicably the Scorch is 40% faster in the 4KB reads, though for smaller files the drive barely beats out the Scorch.

At half full, the numbers repeat themselves along with the oddity of the higher 4KB reads on the Patriot drive.

CrystalDiskMark is disk benchmark software made by a Japanese coder named Hiyohiyo and is one of the simplest and most frequently used tests for storage due to its simple and easy to understand UI. It measure sequential read/write speeds, random 512KB,  4KB,  4KB (Queue Depth=32) read/write speeds, select test data (Random, 0Fill, 1Fill).

Here in Crystal Disk Mark 6.0 we see the WD Black NVMe take another strong lead against the smaller and much cheaper Scorch, this time between 2.5 times as fast, though again at higher queue depths (also kind of unrealistic in the real world) the Patriot Scorch beats the WD Black NVMe out.

Again, similar story though I'm quite impressed with both drives performance at half full, as its really close to out of the box performance.

In the harsher and more realistic use case, we see the WD Black NVMe take a strong and consistent lead, with it taking the lead in every way here earning its higher price point. Its 4k reads and writes are rather close but that is partially the testing platform we are using since we want to try to simulate a more common system as well, since most drives are rather close in this category.

Yet again here, performance degradation is almost null and void. Performance is just about the same at half capacity.

Anvil’s Storage Utilities (ASU) is the most complete test bed available for solid state drives today. The benchmark displays test results for throughput, but also IOPS and disk access times. Not only does it have a preset SSD benchmark, but it's also packing endurance testing and threaded I/O read, write and mixed tests, all of which can be started at the push of a button, with simple results which you can use at home too. We however only used the standard benchmark.

Again more of the same with the WD Black NVMe, drive performance is at about the same delta in all the other tests.

Finally, something where we can see some degradation in performance, the read speeds at half full do take a tumble, but in all other tests this doesn't seem to be an issue nor does it come up in my actual use of the drive.

The PCMark 8 Storage Benchmark is used to create real-world testing scenarios that many users use on an everyday basis. With 10 traces recorded from Adobe Creative Suite, Microsoft Office and as well as Battlefield 3 and World Of Warcraft, the light to heavy common workloads have been represented. This is unlike other tests in that it shows off real-world performance between storage devices. The higher the score the better the drive performs, and application tests are measured in seconds. The test has a break in its cycle as well as 3 rounds of testing.

As we see here, in real-world testing for transfers the WD Black NVMe is quite a bit faster with file transfers, though with smaller file sizes the smaller drive has done a decent job gaining ground on our test system.

All in all the WD Black NVMe is quite a strong drive, with its biggest weakness being its smaller file reads, which seems to be due to it taking a bit to jump from idle to max performance, this can be a problem for light workloads, but honestly not incredibly noticeable for those scenarios, it is the fastest drive we've tested so far, and on paper can compete with the Samsung Evo 970 (which I hope to get my hands on soon.) and all the other drives at this space like the HP EX920, though I wonder how it will compete with all the drives packing the new Phison E12, which I actually will be testing a drive featuring that very soon.

This drive came out a few months ago, and if I had gotten it at that time, I would have easily recommended this drive as the best in class as well as an editors choice before the 970 Evo was released. That being said it is a great drive, and with Black Friday and all the sales it entails along with WD's recent sales on their other SSDs, I would definitely pick this drive up if it ended up on sale, but as of now it is the same price as the Samsung 970 Evo, and other drives are a bit cheaper like the HP EX920 and MydigitalSSD BPX Pro, though it does feature a 5 year warranty, which is quite nice for those who want a bit of extra security in their purchase.

So the long and short of it is, the WD Black NVMe SSD was a great attempt at putting Samsung on the back foot, and as far as I'm aware was quite successful commercially, which makes me very excited for what they have planned in the future for their next set of drives. 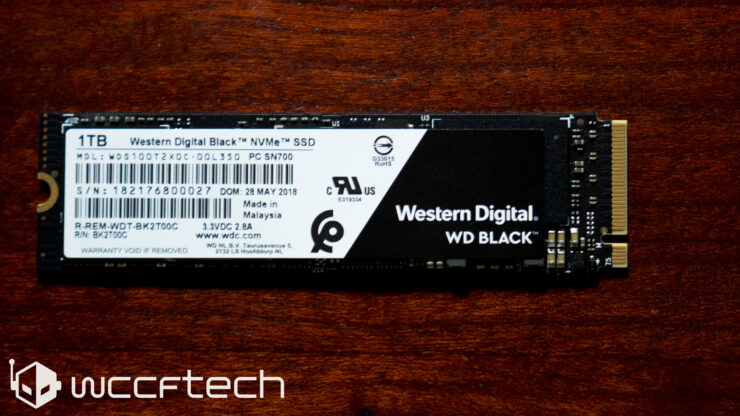 A great performer that can compete with Samsung, and at the right price can be a great option, though pricing is weak currently.