Among the tabletop role-playing games published by White Wolf Publishing, Werewolf: The Apocalypse – Earthblood is definitely among the most interesting, featuring a setting that combines modern themes with typical fantasy elements and an endless battle involving werewolves and other similar creatures to keep the balance in our world, defeat the forces of the spirit of Chaos Wyrm and preserve Gaia. It is not the most innovative setting, top be honest, but the depth of the lore made the world of Werewolf: The Apocalypse ripe for a variety of adaptations, including a collectible card game and several novels.

Werewolf: The Apocalypse – Earthblood is a long-anticipated video game adaptation of the tabletop role-playing game. Developed by Cyanide Studio, the game is a linear action-adventure game that doesn't do anything truly wrong, but doesn't excel at anything in particular either.

In Werewolf: The Apocalypse – Earthblood, players will take on the role of Cahal, a powerful Garou - a werewolf - who is fighting the Endron Corporation together with his tribe to prevent them from further devastating Gaia. A mission gone wrong forces him into exile, and only a fateful turn of events brings Cahal back to his tribe, picking the fight against Endron from where it left off, investigating the corporation's mysterious experiments to put an end to its destructive activities while rejuvenating the bonds with those he left behind years before, like his daughter. 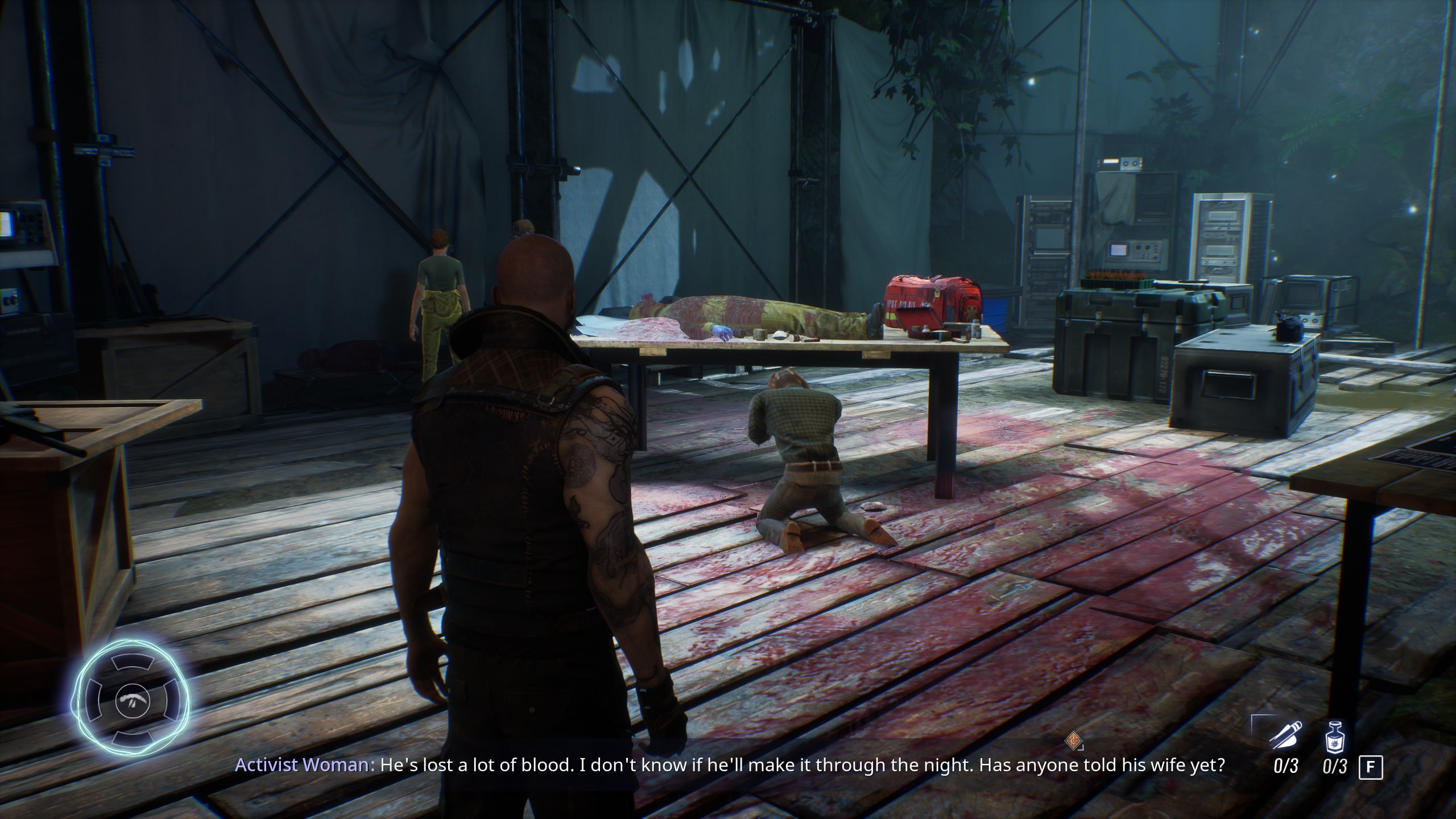 As the premise makes it somewhat clear, the Werewolf: The Apocalypse – Earthblood story isn't particularly innovative. The plot is extremely predictable and the characters are underdeveloped, starting out as stereotypes and never moving beyond their initial characterization. Shallow is the name of the game here, and it is a real shame as the Werewolf: The Apocalypse world has very interesting lore that could have been explored more in-depth. Add in some very basic writing and so-and-so voice acting, and you get a very underwhelming narrative.

The Werewolf: The Apocalypse – Earthblood story isn't the only feature that feels a little shallow. Gameplay, while not broken in any way, isn't particularly exciting, featuring basic stealth and combat mechanics that we have seen over and over in the past years.

Being a Garou, Cahal has the ability to transform into a wolf and a werewolf, known as the Crinos. All three forms have their own unique abilities: in human form, Cahal can perform silent takedowns and shoot his crossbow to dispatch enemies silently, interact with objects like computers to open doors, shut down cameras, and so on; in wolf form, Cahal can move more quickly around, distract enemies by howling and access small ducts to move around while avoiding detection. The Crinos form is the only form that's geared toward combat, giving Cahal access to all the abilities he needs to kill his enemies. 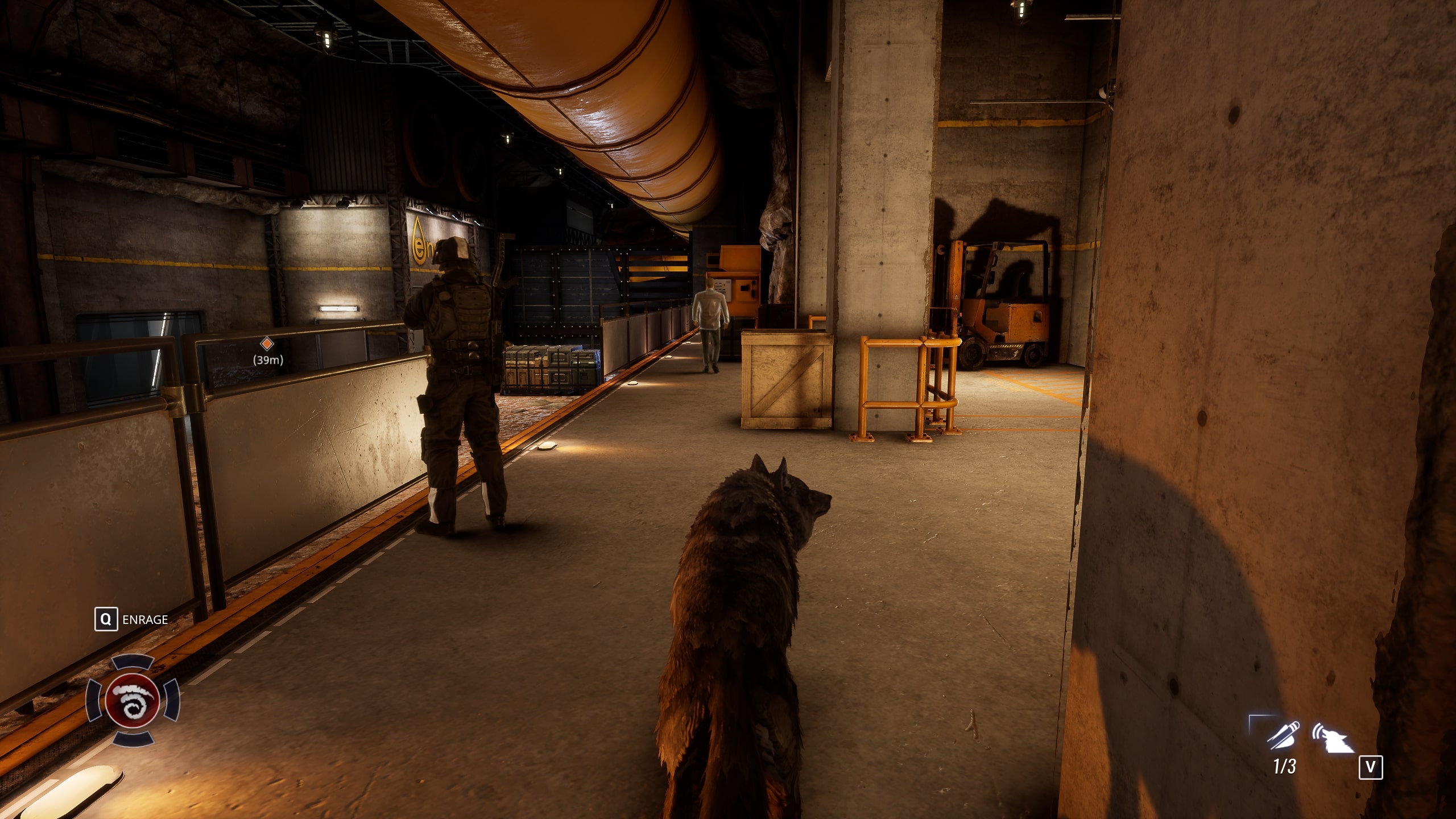 While none of Cahal's abilities feel truly unique, they do work somewhat well thanks to competent stage design. Most of the locations feature multiple paths to the goal, and it is up to the player to pick one that suits their playstyle the best. It is also entirely possible to skip stealth altogether and engage enemies directly from the get-go. Skipping stealth, however, can end up making combat harder due to the Rage mechanics.

Rage mechanics are among the defining mechanics of the entire  Werewolf: The Apocalypse – Earthblood experience, and somewhat tie together the different gameplay elements. Rage powers the Crinos form, allowing players to start combat with the special techniques gauge already filled depending on the number of charges, and to obtain them, players will have to take down enemies silently or pick the right dialogue choices while interacting with other NPCs. These interactions are also almost entirely optional, and players may decide to just be done with them and kill the NPC they are talking with in true enraged werewolf fashion. This, however, comes with some consequences, as you may not be able to receive important information or complete side-objectives.

The power of choice in Werewolf: The Apocalypse – Earthblood does feel good in the beginning, making the game feel less linear than it really is, but unfortunately it ends being as shallow as some of its other features, as none of the choices leads to story or gameplay changes.  The fact that locations, connected by an empty hub world that features only a few secrets here and there, all look samey, resulting in the game feeling a little repetitive over time. More than the power of choice, all players get in the game is the illusion of the power of choice. 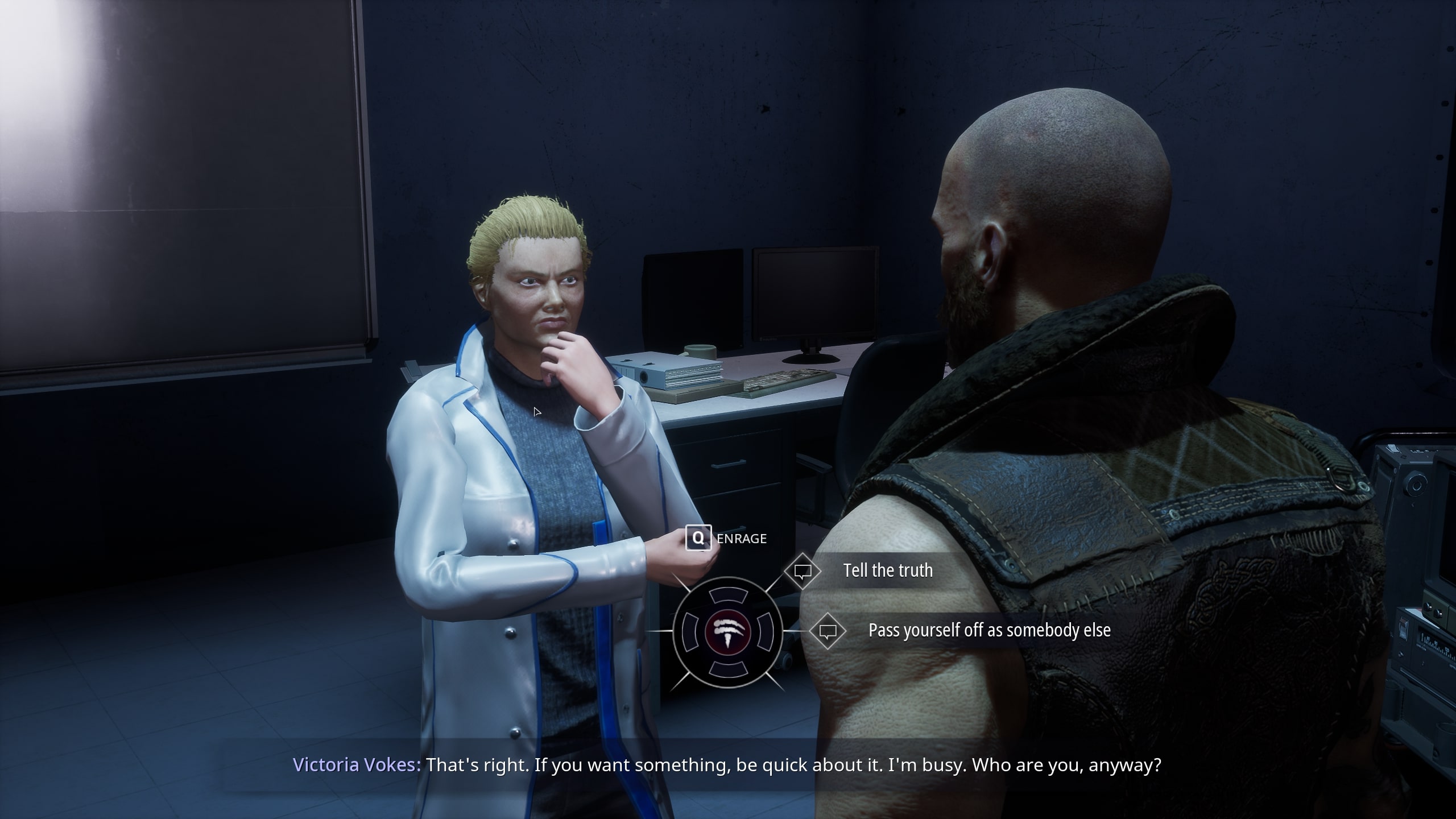 Combat, which should have been the highlight of the experience, is very hit and miss as well. Like many other of the game's mechanics, it lacks real depth, feeling like a scaled-down version of the hack and slash combat system seen in the Warriors series and its spin-offs without the same variety in movesets. Once turned into a Crinos, Cahal can unleash light and heavy attacks, switch between Agile and Heavy stances, which are better suited for fighting certain types of enemies,  grab and throw enemies and turn into a more powerful form by acquiring Frenzy.

To be honest, the moveset does feel varied enough on paper, with different combos available depending on the stance and the attack types but once combat begins, it becomes clear how all these options do not make it feel particularly fun, mostly due to the different techniques lacking any sort of impact. Hit reactions feel way too light, and combo potential is pretty much non-existent, as heavy attacks are way too slow and enemies are rather aggressive. Also, the action is incredibly chaotic and it is easy to lose track of what is going on due to the mediocre lock-on system and camera, which often fail at providing a good view of the battlefield while fighting in smaller areas. 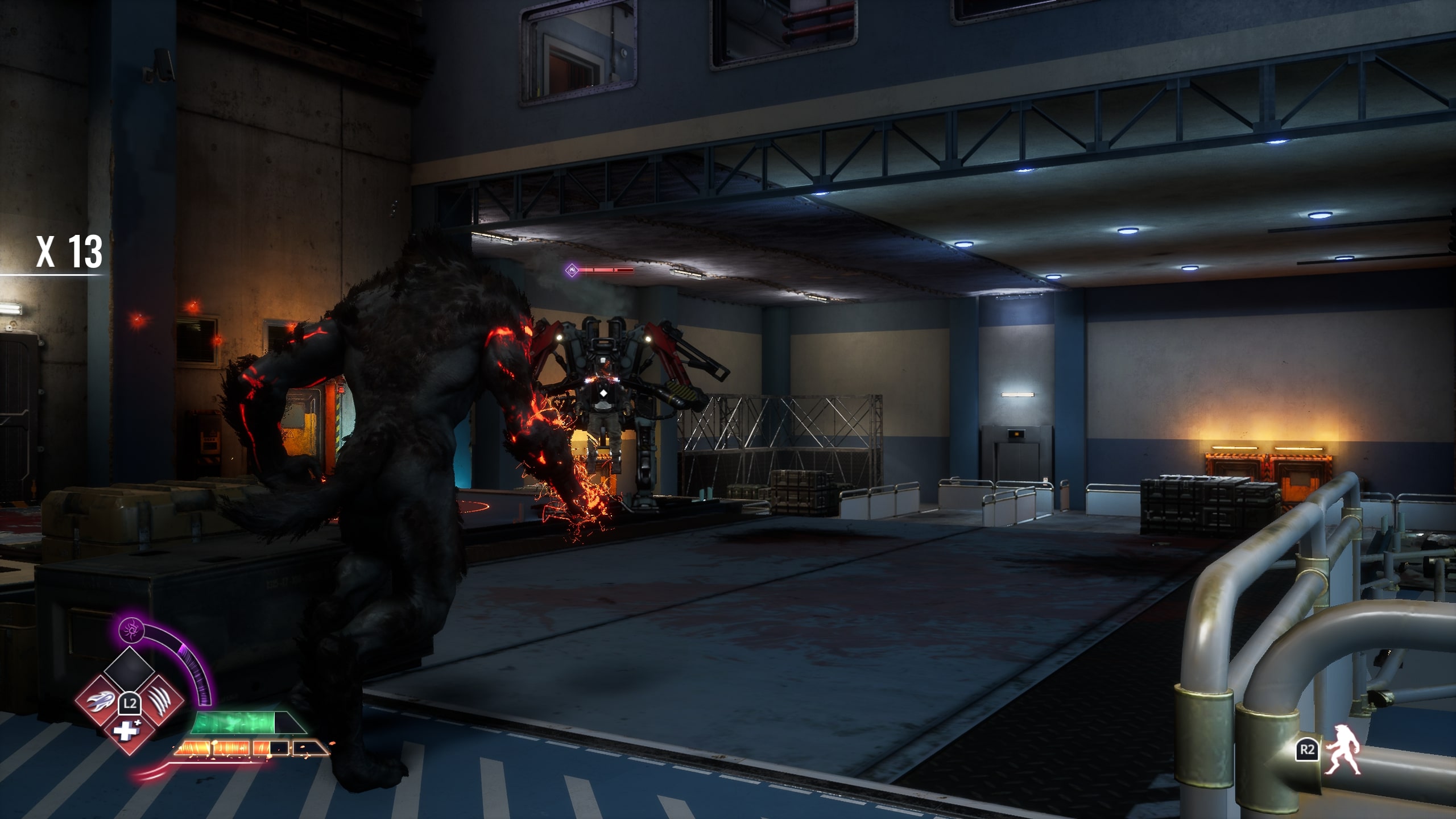 Still, it's not all black clouds. Once more abilities have been unlocked in the incredibly simple skill trees, controlling Cahal does feel a little more fun, and button mashing your way to victory can provide some mindless fun. It all depends on the player's expectations: if you're looking for something with a little bit of depth, Werewolf: The Apocalypse – Earthblood is not the game you should play.

One area where Werewolf: The Apocalypse – Earthblood definitely does not deliver is the presentation. The game features some very simple character models, uninspired locations like labs and similar facilities, and lighting that look two console generations past, with no lip-synching in dialogues or any of the fancy features we have come to expect from modern games. The good thing is that this makes the game very undemanding in terms of system specs: a system featuring an i7-3770 CPU, GTX 980 Ti, and 16 GB RAM has no trouble running the game at 1440p, 60 FPS with everything set to max.

Werewolf: The Apocalypse – Earthblood is a very uninspired game that could have been so much more than what it is due to the uninteresting story, bland characters, and very predictable gameplay. Nothing is fundamentally broken, however, so the game can still provide some mindless fun, granted one does not expect too much from the entire experience.

Werewolf: The Apocalypse – Earthblood is as straightforward as an action-adventure game can be. None of its features are broken, but the shallowness of the entire experience makes it a very hard game to recommend for those who are not into the setting to begin with. It does provide moments of fun here and there, but its linear, derivative experience does not stand out in any way.