Japanese role-playing games are among my personal favorite genre of games to play through and for me, mechanics trumps all. That’s why when Square-Enix announced a game that would be purely mechanical driven without any of the fluff like story or setting, I was immediately curious about what a project would entail. Dungeon Encounters, at first glance, looks like the rough draft of a dungeon crawling RPG yet somehow Square-Enix has put together a complete RPG experience that fills out the $30 experience with thirty hours of gameplay.

Final Fantasy XVI Has Been Rated in Brazil

The opening moments of Dungeon Encounters alert the player about a very basic cursory overview of the Academy and the threadbare story to guide the player’s actions. When I say threadbare, I mean it in the most literal sense possible. Outside of this opening screen, there’s zero story going forward to drive the player forward. The flavor text on each recruitable character hints at an overarching story, but save for a single paragraph attached to a sword received moments before stepping into the final dungeon floors, that’s all of the reading required of the player. What comes next is pure and simple dungeon crawling.

Combat is simplified down to its most basic form while still retaining the ATB (Active Time Battle) gauges that classic Final Fantasy games were known for. Each party member can equip two abilities, from melee and ranged weapons to spells or unique gadgets. The pool that they can equip is based upon their own AP, the only resource that grows as a character levels up beside their HP. Because of the limited AP pool, players are often limited in the strength of weapons they can equip but as they delve deeper into the dungeons, they’ll often find a new sword or magical spell to match their current status. Beyond the standard abilities, exploring the dungeon can reward players with battle abilities that offer the only way to heal in battle as well as buffs to restore broken defenses.

The flow of combat in Dungeon Encounters centers around taking out an enemy’s defenses before you can attack their HP directly. Each enemy will have its own strengths and weaknesses. A flying enemy might have strong magical defense but zero physical defense; to offset this, because of their flying classification, regular melee weapons won’t hit them, making those crossbows and thrown weapons more appealing in certain phases of the game. Similarly, a zombie might have strong physical and magical defenses but only 1 HP. Either you could whittle down their defenses to deal direct damage, or you could leave an equipment slot on one character open so they can punch for 1 HP damage and kill the zombie in one hit. The same goes for the player party; as long as you keep up even one point of defense against an attack, your HP can’t be directly damaged. This mostly holds true as there are some notable exceptions (certain spellcasters, violent stormclouds, and samurai each have abilities that deal direct HP damage).

After forming a party of four from the pre-designed character roster, you’re given free reign to explore the dungeon as you see fit. You’re given a basic framework of the map layout to each floor but it’s up to you to step onto each square and fill out the dungeon pixel by pixel. Standard accommodations such as inns to rest, shops to purchase equipment, and outposts to swap out your combat abilities are all represented with hexadecimal numbers on the board. This information is simple and easily discernible to the player and with how straightforward the experience is, could easily be imported by someone that wanted to try the Japanese version with zero grasp of the language as soon as you interpret what these numbers mean.

The Dungeon Encounters themselves are brutally honest and tell the player exactly what to expect after encountering a specific grid for the first time. A 01 tile denotes a staircase to the next floor while a 02 is a staircase in the opposite direction; numbers 07-1F are all various types of shops that appear, and so on and so forth. The only bit of randomness to the dungeon comes in three forms: treasure chests and pitfalls that appear on specific floors and the enemy encounters themselves. Each 10-level biome appears to be split in half with two distinct pools of enemies. You can instantly tell the difficulty of an enemy encounter by how high the number is; seeing an F9 ghost in the first biome can instantly spell trouble for the enemy as that tile is secretly hiding a level 70+ ghost before you’ve even had the chance to hit level 10 in many instances.

Facing off against that troll ghost or any other manner of danger that spells out the end for the adventuring party doesn’t necessarily mean the end of your run in Dungeon Encounters. When your party is wiped out, they’re left on that specific square with all of their gear intact. At that point, it’s up to the player to form up a new adventuring party to explore out to that tile and bring them back safely. Since you can’t have more than four characters in a party, oftentimes it’s safer to bring a party of two and carry two incapacitated characters in a round trip, heal them up and swap them out to your normal team of adventurers and carry back on once at full health. Certain hazards, such as being swallowed up by an anaconda or falling through a pitfall all the way outside of the map can lead to your party being scattered about, left to wander the dungeon at random (you can at least cure a teammate of being swallowed by killing the same type of enemy on that floor). In many instances, Wandering status can be the absolute worst thing to affect your party as they can be dropped off on nearly any square in the 88,000 tile dungeon.

As you progress through Dungeon Encounters, you’ll unlock new passive traversal and combat abilities (as well as some active recovery options too). To equip these, you need to invest a certain number of ability points to offset the cost; these points are earned by attaining specific step thresholds as well as marking every single step in a given floor. These traversal mechanics allow you to jump up and down floors at will, offer radars to show the nearest distance to a wandering teammate or unmapped tile, and other means to expedite the spelunking experience. Most of my exploration concerns were alleviated by the end of the adventure one way or another as new mechanics were unlocked with regular progression and occasionally branching off the beaten path. One important thing to note is that once an ability is discovered, a player needs to return back to the nearest Ability Station and equip it, first needing to have sufficient AP to slot the ability. These AP are doled out regularly as achievements to discovering a certain number of tiles but more importantly for discovering every tile on a given floor.

Along the way, players will easily discover all of the abilities and secret shops just with regular exploration via marked tiles. However, to add in more of a challenge and incentive for discovery, Dungeon Encounters also offers a few dozen map and math puzzles to serve as handy brain teasers along the way. Map puzzles often give a tiny glimpse at a map with a spot that marks a hidden treasure. With each 10-floor biome having its own distinctive layout, players should be able to discover the goods here with relative ease. The trickier set are the math puzzles that give up their solution in a set of coordinates. These can be as simple as recognizing patterns or prime numbers but one especially tricky one was solved for me by a friend who mentioned that it was coordinates from Close Encounters of the Third Kind. If you’ve read this far and want a little hint for a secret dungeon item, go take a look at coordinates 31,31,31.

Because you can reach a game over in Dungeon Encounters if all of your party members are wiped out or lost in the dungeon, it’s important to have some backup characters back at the Floor 00 Academy. They don’t necessarily have to be leveled up as you can go perform an emergency team extraction without having to actually face anyone in combat if you’re careful enough to avoid enemy encounters. Finding new party members is an important step in Dungeon Encounters and one that isn’t readily clear to the player. Only by standing on a specific tile and opening up your menu to look at your team composition can you see if a Wandering party member is available for recruitment. You’ll need an open slot in your party, leaving behind an old member if not, to pick them up and take them back to the Academy; there are, however, endgame abilities that help to facilitate the transportation so much easier.

With no story and simplified combat, why would someone be interested in Dungeon Encounters? Well, this is an experimental project helmed by the father of the ATB combat system meant to be mechanics forward. Keeping the player motivated is the continuous gear treadmill of seeing their attacks grow from a few hundred points here and there to upwards of a few hundred thousand (my strongest attack hit at around two and a half million damage). That constant sense of satisfaction of filling in each and every blank tile on a given floor and unlocking some additional ability points hit those special pleasure centers in my brain that only a good RPG can trigger.

Would I say Dungeon Encounters is for everybody? It would be a tough recommendation for anyone that isn’t already familiar with and intimately interested in Japanese role-playing games and that style of combat that Square-Enix was crafting in the late ’90s. Dungeon Encounters is a surprisingly straightforward RPG once you get a grasp on the mechanics and serves as one of those experimental titles that I would like to see major publishers take more risks on once in a while. 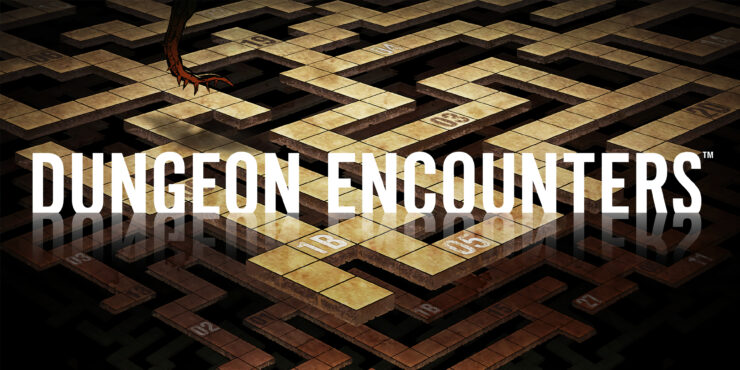 As a Mechanics-First style of game, Dungeon Encounters offers little to entice players that aren't already fans of Final Fantasy's Active Time Battle from yesteryear. What surrounds that dungeon crawling experience is threadbare but established fans can use what's there and chart their own paths.