Hideo Kojima’s P.T. sure has inspired a lot of imitators for a simple demo. When Konami cancelled Silent Hills, numerous indie teams stepped up to announce full games that would continue where Kojima’s teaser left off, but most of these projects either didn’t end up coming to fruition or weren’t all that great when they did. Visage is a notable exception to the above rule. Developed by a small team at Montreal’s SadSquare Studio, Visage exited Steam Early Access last month and deserves to be taken seriously. This is a full 10-to-15-hour survival horror game with ambition to spare.

So, Will Visage satisfy fans still mourning Silent Hills’ untimely demise? Or has the P.T. curse claimed yet another promising indie horror game? Grab a candle as we delve deep into Visage’s dark recesses… 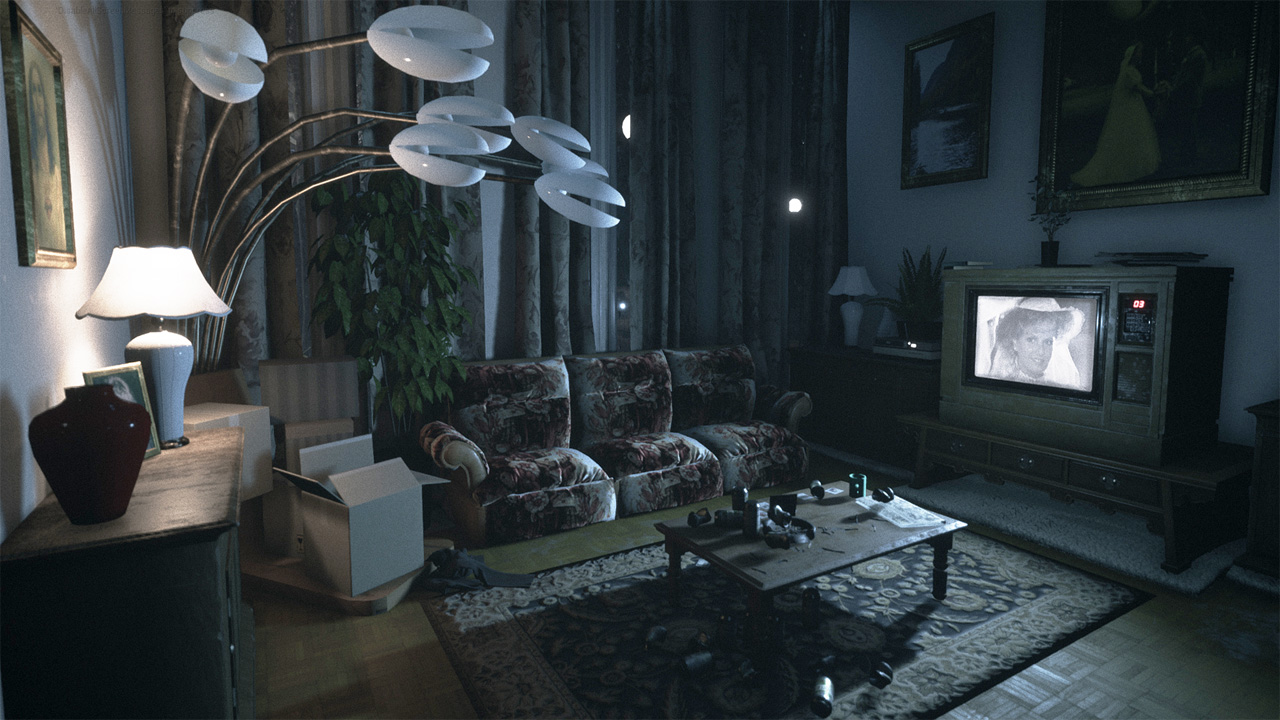 Visage begins with all the subtlety of a sledgehammer to the skull, as we’re treated to a disturbing first-person scene in which a man seemingly kills his family, before turning the gun on himself. We then assume the role of a man named Dwayne Anderson, who lives alone in the same house the just-mentioned murders took place in. Did Dwayne kill his family? Is he himself dead? This is just the first of many mysteries presented to the player. One thing’s for sure, Dwayne’s house has some serious bad mojo.

Numerous people have met gruesome or tragic ends there, and you’ll gradually uncover their stories as you make your way through the game. What’s the true nature of the house? How do all these stories tie together? Don’t expect any easy answers. Much like Stanley Kubrick’s The Shining, you can enjoy Visage on a surface level as a fun haunted house yarn, but the game is also packed with clues to a larger story. If you’re the type who likes digging for hints and theorizing, you’ll enjoy Visage’s world and narrative, but if you’re hoping for a clear plot and a traditional, satisfying ending, well, prepare to be disappointed. 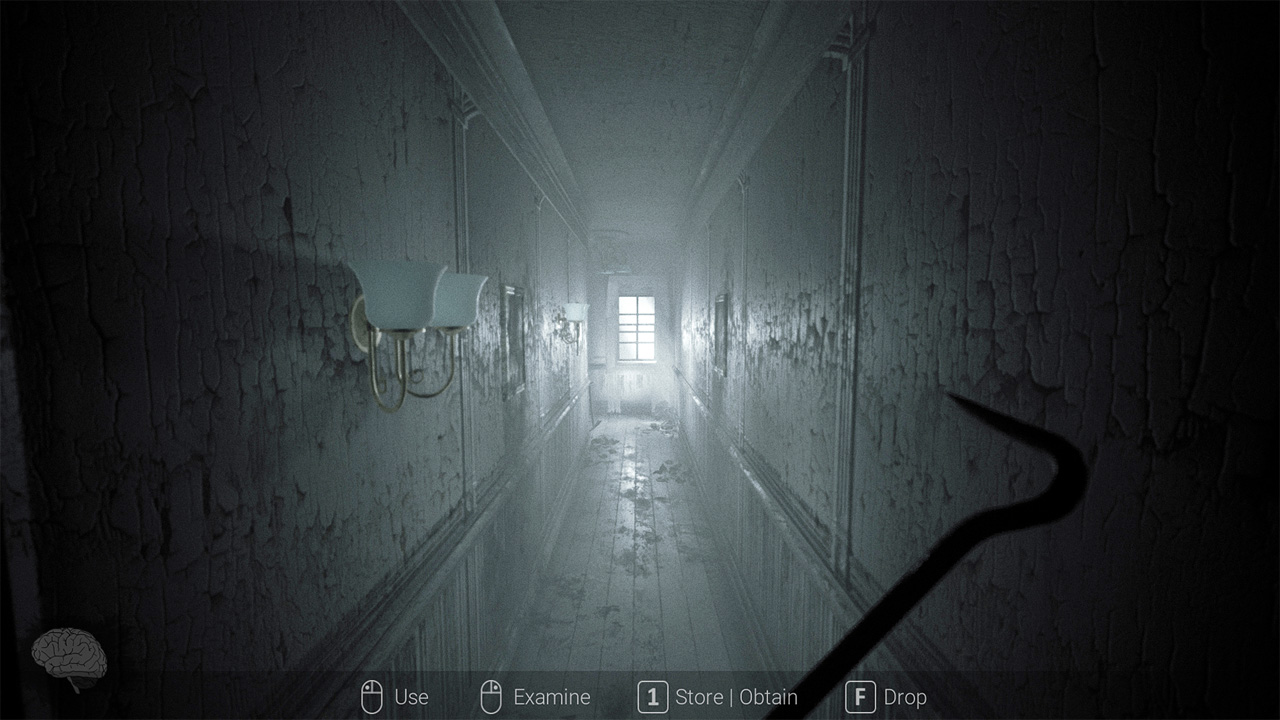 While Visage may initially seem to be a simple P.T. clone, there’s actually quite a bit more to the game, including classic survival-horror-style inventory puzzles and a sanity system that induces hallucinations if you experience enough creepy events or spend too long in the dark. The game’s control scheme, which allows you to hold items in both your left and right hands or in a small inventory, takes some getting used to. The item juggling really becomes a hassle once you pick up tools like the sledgehammer or crowbar, which can be carried with one hand, but require two hands to use – this means you have to put away whatever’s in your other hand, and if your inventory is full your only option is to awkwardly drop your other item on the floor. This comes up way more often than it should. It would be near impossible to make a 15-hour game as mechanically simple as P.T. was, I get that, but this double-handed Amnesia-style control scheme isn’t quite the right fit. That said, this isn’t an action game, so spot-on controls aren’t a make-or-break, and you will get used to the clunkiness eventually. 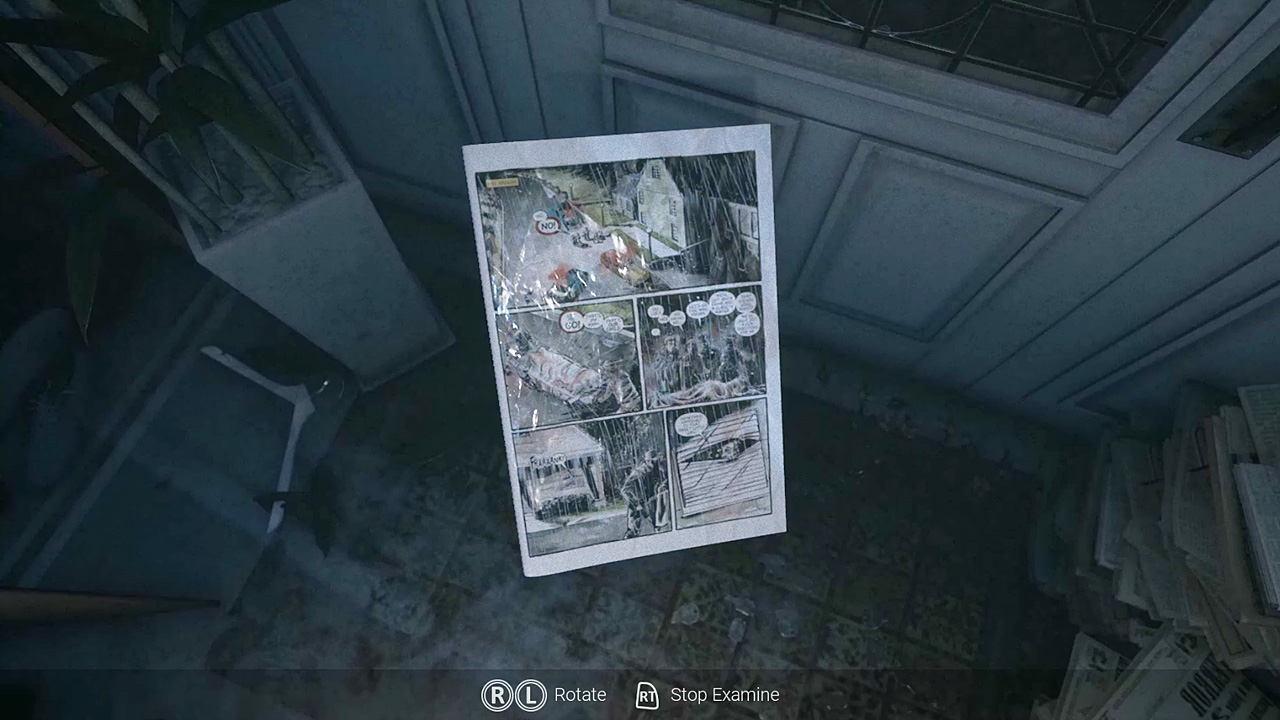 Visage’s puzzle design also struggles somewhat to evolve from the baseline P.T. laid down. Kojima’s teaser progressed in a largely random way, which was fine for game mostly set in a single hallway. A bit of trial and error isn’t so bad in such a limited environment, but can become annoying in a larger game like Visage. According to SadSquare co-founder Jonathan Gagné, early playtesting convinced them to make Visage less arbitrary, and indeed, there are plenty of more traditional logic-based puzzles in the game, but they don’t go quite far enough. You’ll still find yourself doing silly things like knocking three times on the back wall of a random closet to make a door open elsewhere in the house or placing a specific slipper on a bed to summon a ghost. When you’re stuck, you’re never quite sure if there’s a logical way forward or you just need to start randomly poking around. I’ll admit, I had to consult a guide a couple times, and I wouldn’t blame you for doing the same. That said, stick to a spoiler-free guide, because you don’t want to ruin the best part of this game -- namely, the scares.

Whatever criticism I may have about Visage’s controls and design, I absolutely cannot deny this is one hell of a scary game. Visage’s visuals may not be that impressive technically, but much like P.T., the house you explore looks and feels oddly real. This unnerving verisimilitude makes every shadowy corner and odd creak way more effective than they have any right to be. And trust me, once the actual ghosts and jump scares start happening, you are going to be jumping out of your chair. I’m a survival horror fanatic, I’ve played ‘em all, and I lost count of the number of times Visage made me scream out loud. Even as you’re wandering in circles trying to figure out what to do next, the house never quite loses its edge. 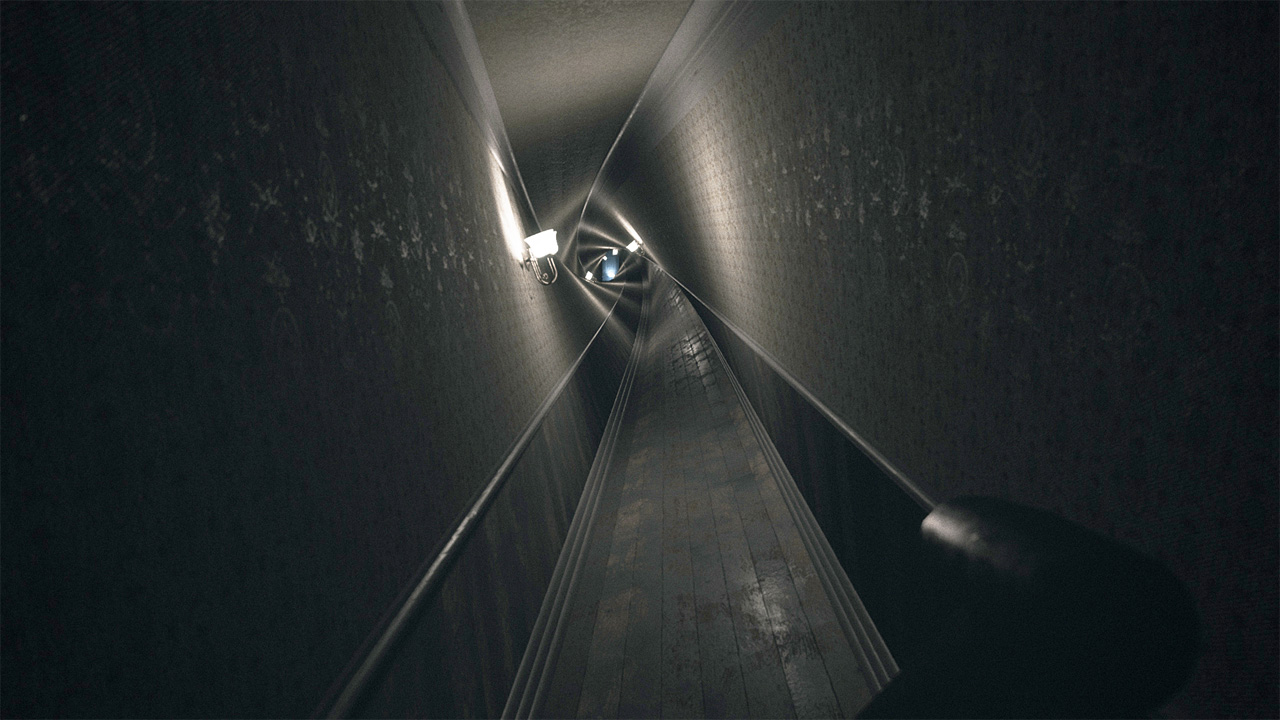 This is partly because, unlike P.T., you get to take some breaks from the house. While you always start there, reality begins to fray as each chapter progresses, and you’ll eventually find yourself transported to a variety of other locales. You’ll explore more grounded locations like a spooky hospital and graveyard, but you’ll also venture into twisted worlds inspired by M.C. Escher or made up of gruesome pulsating flesh. At first, I didn’t like these fantasy worlds as much as the house, but they all have their own vibe, and some of them (particularly later in the game) deliver some solid shocks.

Visage was developed in a somewhat piecemeal way, with chapters released over the course of a couple of years, and as such, each one feels a bit different. Chapter 1, entitled “Lucy,” is the most P.T.-like, Chapter 2, “Dolores,” goes heaviest on the puzzles, Chapter 3, “Rakan,” has more of a traditional survival horror feel with lots of encounters with enemies, and the final chapter is a psychedelic trip through multiple strange worlds. The first chapter is probably the most balanced overall, but I also enjoyed the third chapter as a less-puzzling breather. You’ll likely have your favorites as well. Yes, Visage can be inconsistent, but I give SadSquare credit for trying a lot of different things. 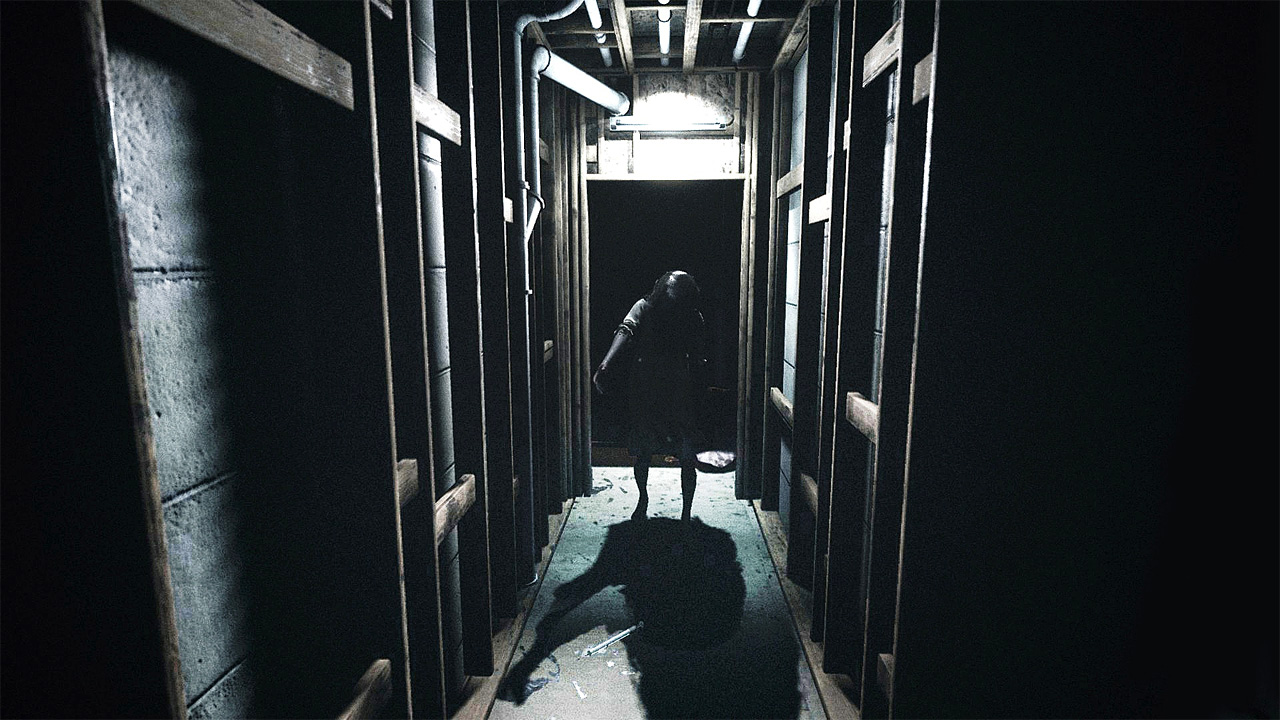 I won’t deny, there were times Visage grated on me. Times when I might have set the game aside if I wasn’t reviewing it. I had to work around more than a handful of glitches in order to get to the end. That said, I’m glad I persevered. Over the 10 to 15 hours I played Visage, I discovered a surprisingly rich, satisfying world, and now that I know how to get past the game’s most vexing sections, I’m looking forward to tackling certain chapters again. To uncover new secrets and test my theories about the game. The fact that I’m eager to return to this haunted murder house says a lot, I think.

This review was based on a PC copy of Visage provided by publisher SadSquare Studio. You can grab a copy of the game here.

Visage is one of the most terrifying games I’ve ever played, full stop, but it’s not going to be for all horror fans. The game’s perplexing puzzles, convoluted story, and rough edges will turn off some, but if you can stick it out, there’s a good chance it will eventually sink its hooks into you. Good horror can take time to process, and I believe Visage’s dark presence will only grow with time.