The old foggy streets of London are infamously appealing for serial killers since the days of Jack The Ripper. The roads wind and end unexpectedly, the gaslights cast long impossible shadows and there’s the unmistakable sense of danger around every corner. But as you walk down these streets in Vampyr, you are not the victim of the story.

Vampyr, in a single sentence, is an action RPG with a heavy focus on NPCs. You play as Jonathan Reid, a brilliant doctor doomed to immortality during a terrible outbreak of the Spanish Flu. While the graphics aren’t great, at least on the base PlayStation 4 console, the atmosphere is just stellar. There is a palpable menace throughout London, even the textures pop in and out and the lines on objects blur a little. The map is small but detailed, and darkly delightful to explore. To be created on a such a budget means sacrificing a few things, so although the graphics aren’t as sharp as they could be, I personally wouldn’t have wanted them improved.

The quest will have you discovering the vampiric outbreak, and to try and fight the epidemic of scientific and supernatural sickness wreaking havoc on the city. 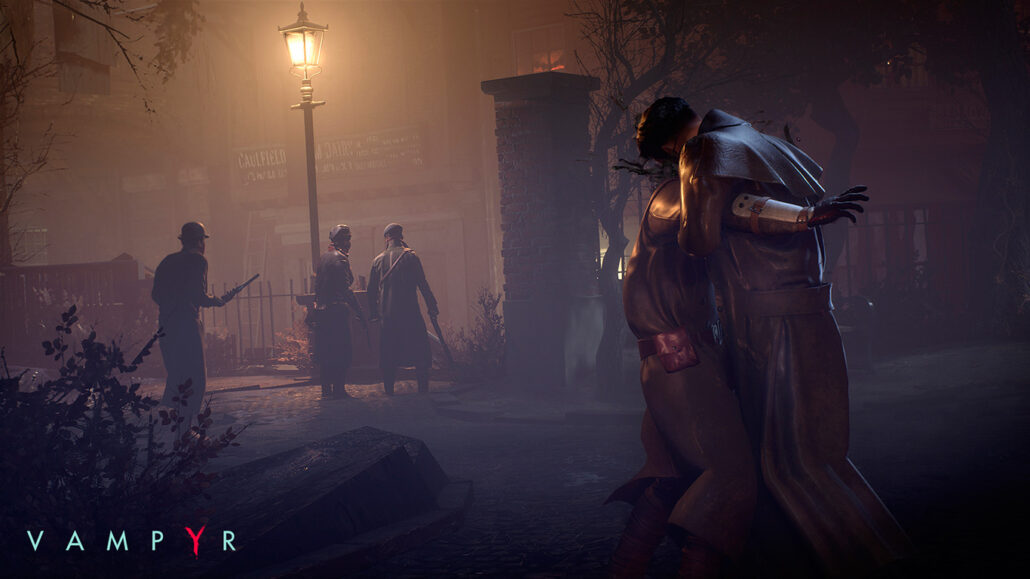 To do this you’ll have to investigate and explore the eerie streets of London, fighting savage beasts and vampire hunters. It’s a huge part of the game, but the combat is framed, typically, as a challenge. While there is no real way to avoid it, stealth isn’t really an option, each encounter is made to feel increasingly dangerous.

The combat also has a unique focus that, in my opinion, works extremely well with the overall concept. It's fast moving, but with heavy, lumbering attacks that require a little practice to balance. More importantly, there is no way to block and countering can only be done with certain weapons. And while dodging is a big part of any combat encounter, healing seems much more important. This can be done either by biting an opponent or through an ability you get very early on. You have to be tactical to do it though, stunning your enemy or keeping your blood level topped up. Healing, especially at the cost of your enemies' health, gives you this delightfully powerful feeling we've all come to expect from impersonating a vampire. You are not a mortal anymore, you are not prey, but the thing that hunts in the night.

That doesn’t mean that combat is easy. Vampire hunters work in groups, with later versions are equipped to deal with your unique powers, and the other monsters that stalk the night can have equally powerful healing factors. Using all the abilities at your disposable, you’ll still struggle to overcome certain bosses and groups, unless you get a little help.

Vampyr doesn’t have an obvious difficulty or morality system, which are instead woven together and almost invisible. As a creature of the night, your bloodlust is the resource you use to level up. While you’ll receive a constant trickle from fighting the enemies on the street, there are ways you can snatch a lot of experience all at once; all you have to do is feed on an innocent. Each region of London has a collection of NPCs with backstories, relationships and personalities, and each of them is a potential blood bank. Feeding might destabilize the region, which can have extremely long-lasting effects, but it comes with the immediate gratification of becoming much more powerful. 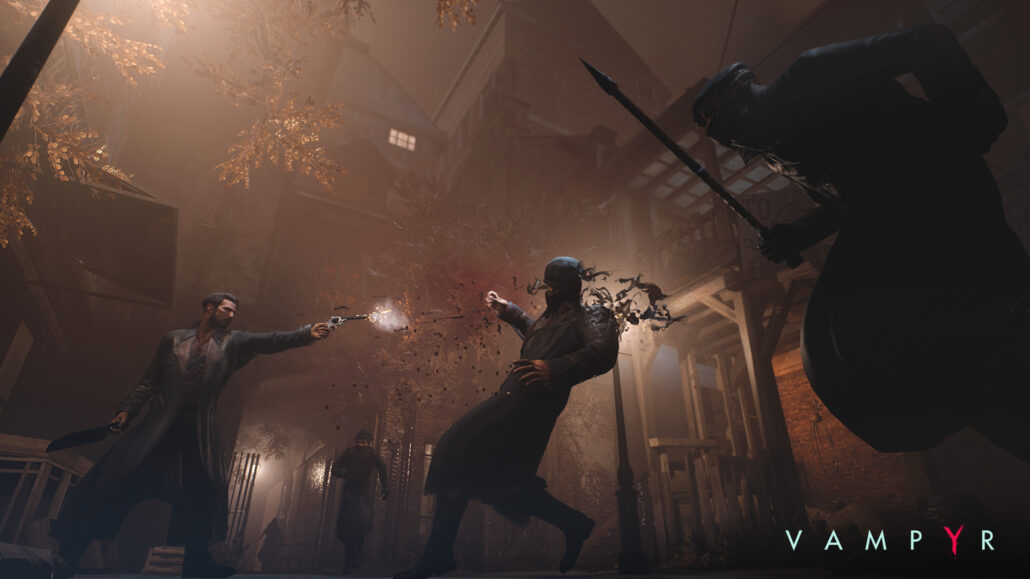 This is the central question of Vampyr and one that lingers in your mind each time you bump into a particularly powerful foe. Vampyr balances on the edge of Victorian gothic literature and more modern vampire stories. While you might catch glimpses of Dracula and Frankenstein, the story felt more current to me. There are secret societies to expose, conspiracies and tragedy all woven together with a large cast you can interact with. What’s nicely done is you can never be quite sure how important any character you meet is, as the tight location means you’ll be encountering them more than once. As a not-quite-living paradox, a man both sworn to heal but in need of blood, the story will test your bloodlust against personal morality. This is especially true when you start to encounter the less friendly side of society. The fundamentalists, the racists and the opportunists can all be fed on too. It is a little strange how much weight is put on some lives rather than others, like the hunters on the street; this feels very obvious at the beginning of the game, but it's ultimately understandable.

It is possible to complete the game without giving in to your darkness addiction, but you will feel the challenge as a result of your mortal ethics. I played as both sides of the coin and it is obvious. While my better nourished doctor had some many different abilities to play with, toying with most enemies before killing them. My good doctor, on the other hand, had to focus on upgrading a select few abilities to take on the bigger enemies.

Feeding is also affected by the NPCs health and what you know about them. If you make them medicine when they’re ill, and go through the different dialogue options, the reward is even greater. But unfortunately, the dialogues didn't really hold my attention much. I felt it lacked the impact of games like The Council and DONTNOD's own Life is Strange, offering little but glimpses of information and the potential for an experience boost. There's not much you can do to affect conversations and they just feel a bit shallow compared to the combat and feeding mechanics. Learning about backstories and little hints of lore can be interesting, of course, but there’s nothing to it but selecting options and listening to outcomes. Obviously, some dialogue trees are more interesting than others and can involve picking your words carefully, but they are just not as engaging as they should be. Which is doubly disappointing given the studio behind this created Life is Strange. It's not bad, just not as good as you might have hoped for. 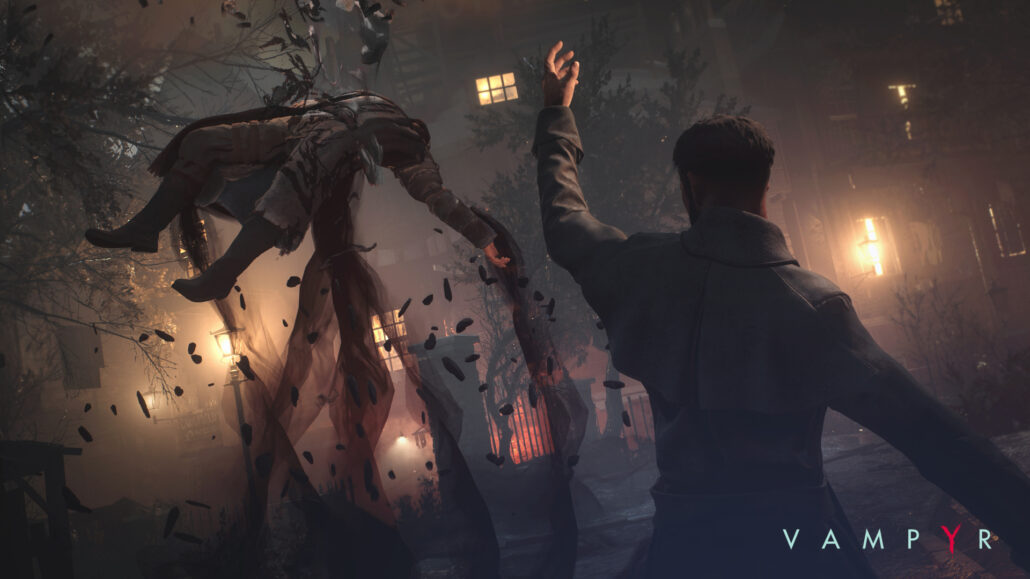 Unlike Life is Strange, anyway, the consequences of your actions are something you can never escape from in Vampyr. The developers made the very clear decision to save each time you made a decision, whether it’s a dialogue choice, handing in a quest or feeding on an NPC, there’s no going back. It again all feels like the game is forcing you to choose between immediate gratification and longer term reward.

Vampyr isn't without flaws, but I had a lot of fun with it. While the dialogue system feels like an unexpected misstep, the combat, setting and story all make up for that stumble. Stalking through London and inciting fear into the hearts of the overconfident hunters felt fantastic. The spooky setting is filled with short but juicy stories worth finding, places worth exploring and detail worth appreciating. With a more interesting dialogue system, it would have been marvelous. As it stands, overlooking the occasional visual bugs and graphical lapses, Vampyr is still great fun, but like all undead, you’ll have to take the negatives with the positives.

Reviewed on PlayStation 4 (code provided by the publisher). You can purchase the game for your preferred platform via Amazon.

Dontnod worked hard to create an immersive, dark world to explore and it succeeds in doing so. Despite some boring conversations, most of the world of Vampyr is an exciting, dangerous place and if nothing else, being a vampire in here is also very fun.