Riot Games has grown into more than just the DotA-inspired League of Legends studio in recent years. Their recent push for new titles has seen the publisher evolve into a studio that's working on card games, 1v1 fighters and now their first hero shooter. Valorant is a heroic effort to give the studio their first action title while trying to retain the esports lineage that the studio has been developing over the years. Is Valorant the next big thing in esports, or has Riot Games already spiked the launch? 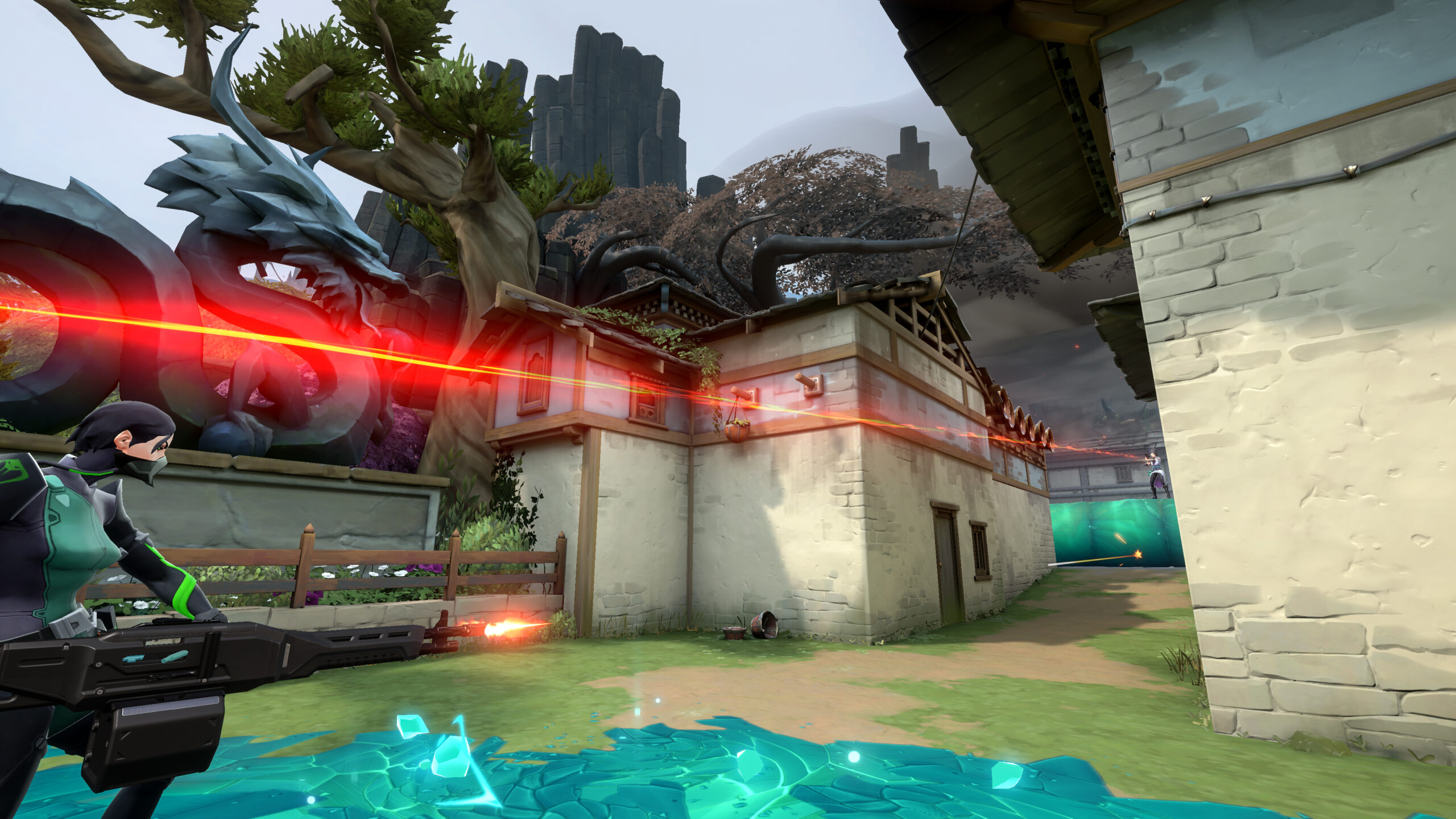 It's easy to label Valorant as a hero shooter or yet another Counter-Strike inspired game but the fusion together turns it into something completely different. While Crucible and Overwatch put 100% of the combat approach onto the heroes themselves, Valorant changes things up with a 50-50 design: half of the combat revolves around the agents and their ability loadouts while the other half is the gunplay.

Valorant's team composition is more than just picking the hero with the best ultimate ability. In every round, each hero has the chance to be useful and truly shine in tandem with the other players on your squad. Each hero fits into one archetype that feels different from the standard MMO trinity of attacker, defender and healer. Initiators have abilities that help the team push forward to an objective and distract or disarm enemy combatants while controllers help to move the flow of battle in a particular fashion by deploying barricades and smoke screens or trip wires that alter your team when someone crosses the threshold. Duelists are the most straight forward in terms of archetypes with most of their skill loadouts being damage-based but they still feature unique tools to adjust the flow of battle. Raze, for example, can use her deployable C4 charges as a makeshift rocket jump to get up on top of a more advantageous position. 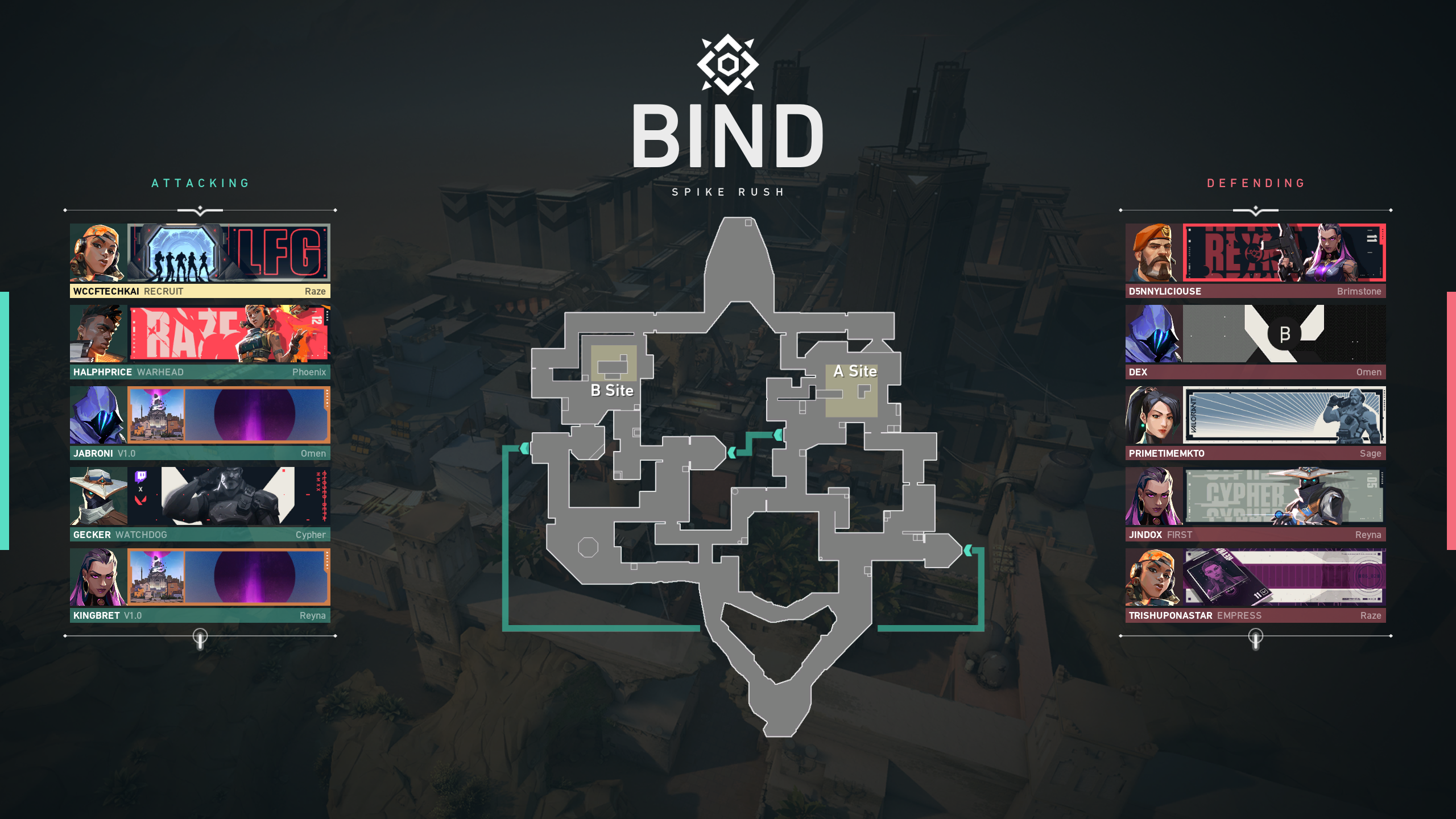 No matter which mode you play on, the premise is going to be the same: attackers aim to plant their spike bomb at one of the pre-determined sites on each map while preventing the other team from disarming it. If you've ever taken a trip to de_dust2 in Counter Strike, you already know this simple gameplay loop. Contrary to the likes of Overwatch, players are locked into their hero choice from before the match begins. If you find yourself without the right zone controllers or mitigators, focusing more on the gunplay and coordinated strategies should be your primary focus in this team-based shooter. Each match, whether it's the core game or Spike Rush, rotates halfway through the number of rounds and switches the defenders into the attacker role, and vice versa. Even if you have a strong first half playing as the attacking team, your same team might not have the coordination to play defensively and wind up losing the match. For the main mode, players go through 12 rounds, win or lose, before switching sides with it ultimately being up to the team to score 13 wins being decided as the winner.

The weaponry to Valorant isn't too far off from your standard Counter-Strike loadouts. During the buy phase before each round, you'll have a limited amount of cash to buy whatever equipment you'll bring into that round, from guns and body armor to the consumable abilities each character can use. With a complete lineup of sixteen weapons, what you're able to buy in a given round can completely change how you approach a match. You're obviously not going to want to rush the spike site with an Operator sniper rifle unless you're 100% confident in your skills with quick shots, just as you probably wouldn't want to hang back with a shotgun and wait for the action to come to you. Many of the weapons handle differently between hip-firing and ADS, such as the Bulldog changing from an automatic rifle to a burst weapon when zoomed in. 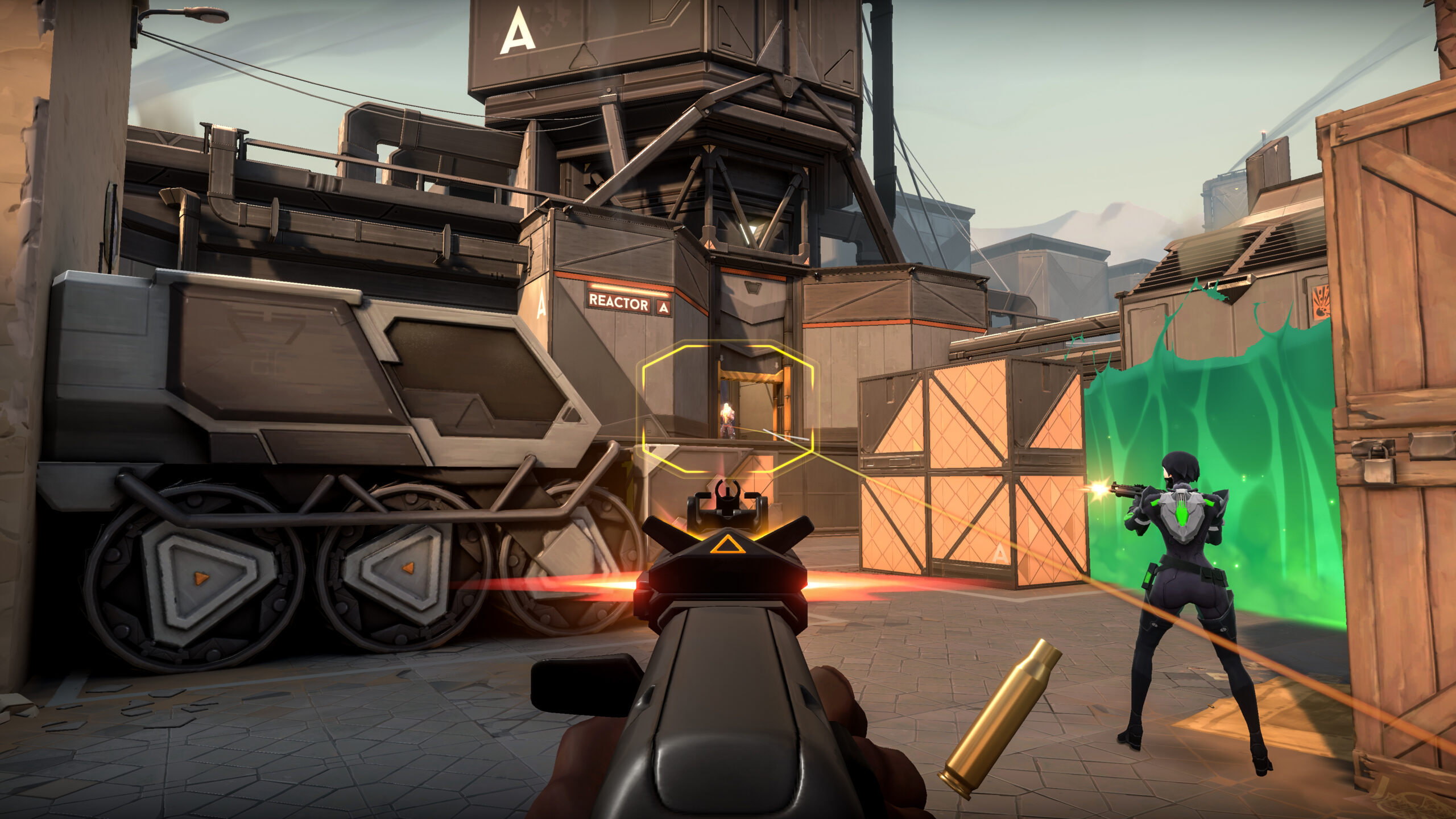 In a shooter where your time to kill can often be determined by whoever has the faster reflexes, knowing how you died can be an important step to getting better. Every single piece of information that pops up on screen during a match can inform the player and provide a valuable teaching moment. Need to know why your economy is doing so poorly? Each buy round gives you a breakdown for how much cash you earned, from round losses to plants and defusals and more. Don't know how you got shot from your vantage point up in A Heaven? The minimap gives a clear angle of your exact sight lines for that position. Thought you clearly shot someone in the head from afar? The after-action report gives you a breakdown of abilities used, their effectiveness, and then a listing of all incoming and outgoing shots to see exactly where your shots made their mark. All of this information provides a valuable teaching moment for players that are serious about wanting to become a better Valorant player.

Recoil will be a player's hardest opponent when picking up Valorant for the first time. This isn't an arcade shooter like Call of Duty where you can jump and dolphin dive around the map and still get a fully accurate shot off with a sniper rifle. Much like the precision needed in Counter-Strike, Valorant's array of weapons each have their own recoil tuning and tempo to firing off with any sort of accuracy. Moving while trying to shoot always leads to erratic firing and the best shots are made from standing still or ideally crouching. Both sniper rifles have a helpful red dot that appears when the player is stationary, indicating at their shot will land on target. 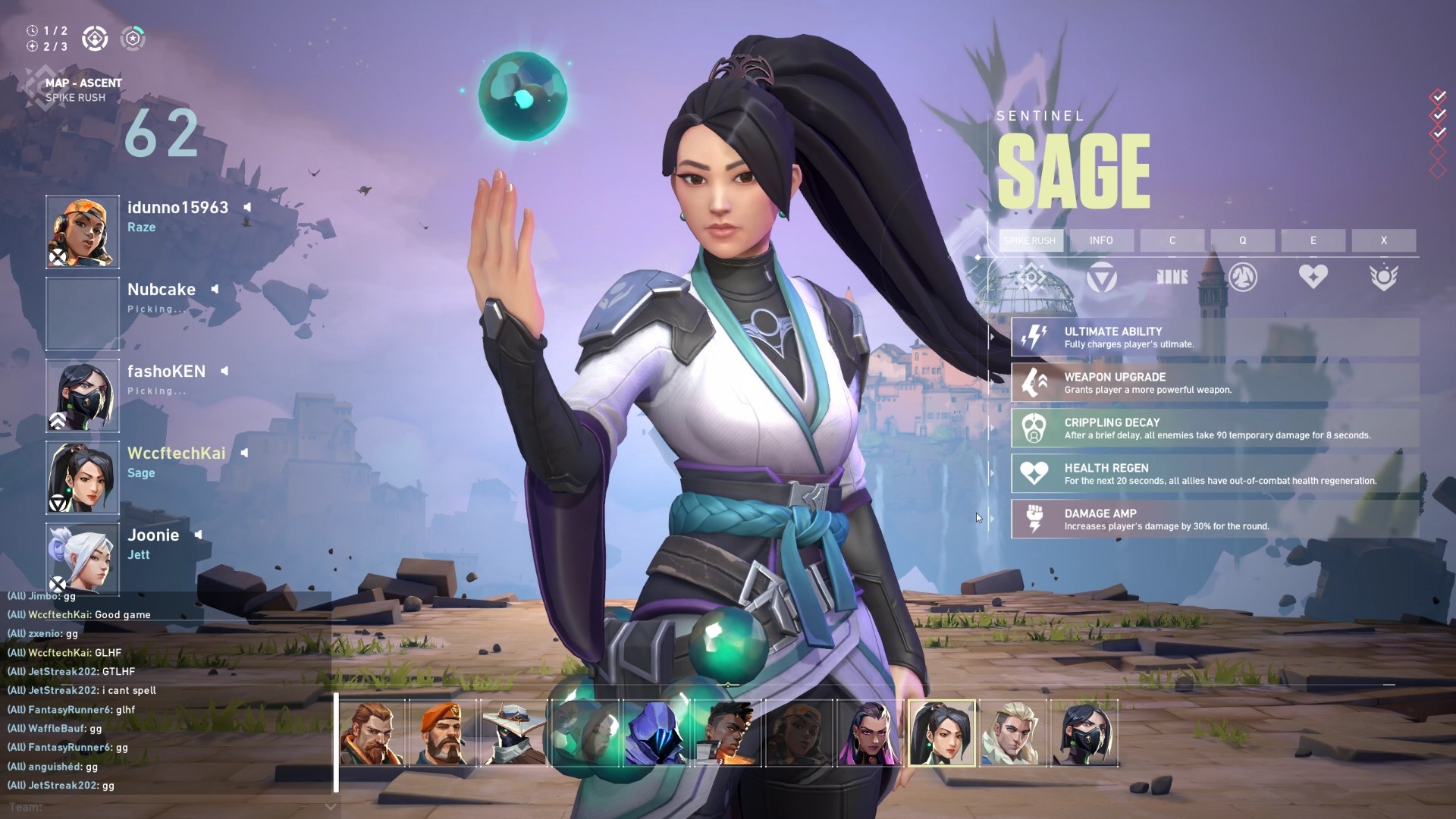 What I found completely fascinating with the weaponry in Valorant is that each weapon feels, for lack of a better term, honest. When you pick up a Vandal and fire at an enemy, you'll know exactly how much damage each shot will do. Hitboxes are separated into head/body/legs and each weapon does a varying amount of damage to each zone from a preset range. Shotguns operate similarly with each pellet doing the exact same amount of damage each spot you hit. Memorizing these levels of damage isn't something a player is expected to know, but if you know for a fact you hit that enemy Sova twice in the leg from thirty meters, you should have a good idea just how much health he'll have left the next time he comes around a corner.

Character abilities, on the other hand, felt like they had varying levels of effectiveness. Taking Raze, the demolitionist of the initial lineup, for example, her arsenal consists of two C4 charges, paint grenades that work just like your standard armament, deployable drone, and an ultimate ability that consists of an overpowered rocket launcher. The C4 charges felt like more of an annoyance than an effective tool in most encounters. I found deploying them and letting the enemy team get distracted by the beeping to be more effective than the damage itself. At the same time, her little robot drone felt the most effective at dealing damage, provided it wasn't bouncing off of walls from an ill-angled launch. Her abilities felt more like they were there for harassing the enemy team than dealing damage but I wouldn't deny that getting a surprise kill with her drone when trying to prevent a spike defusal wasn't one of the more satisfying plays I've made. 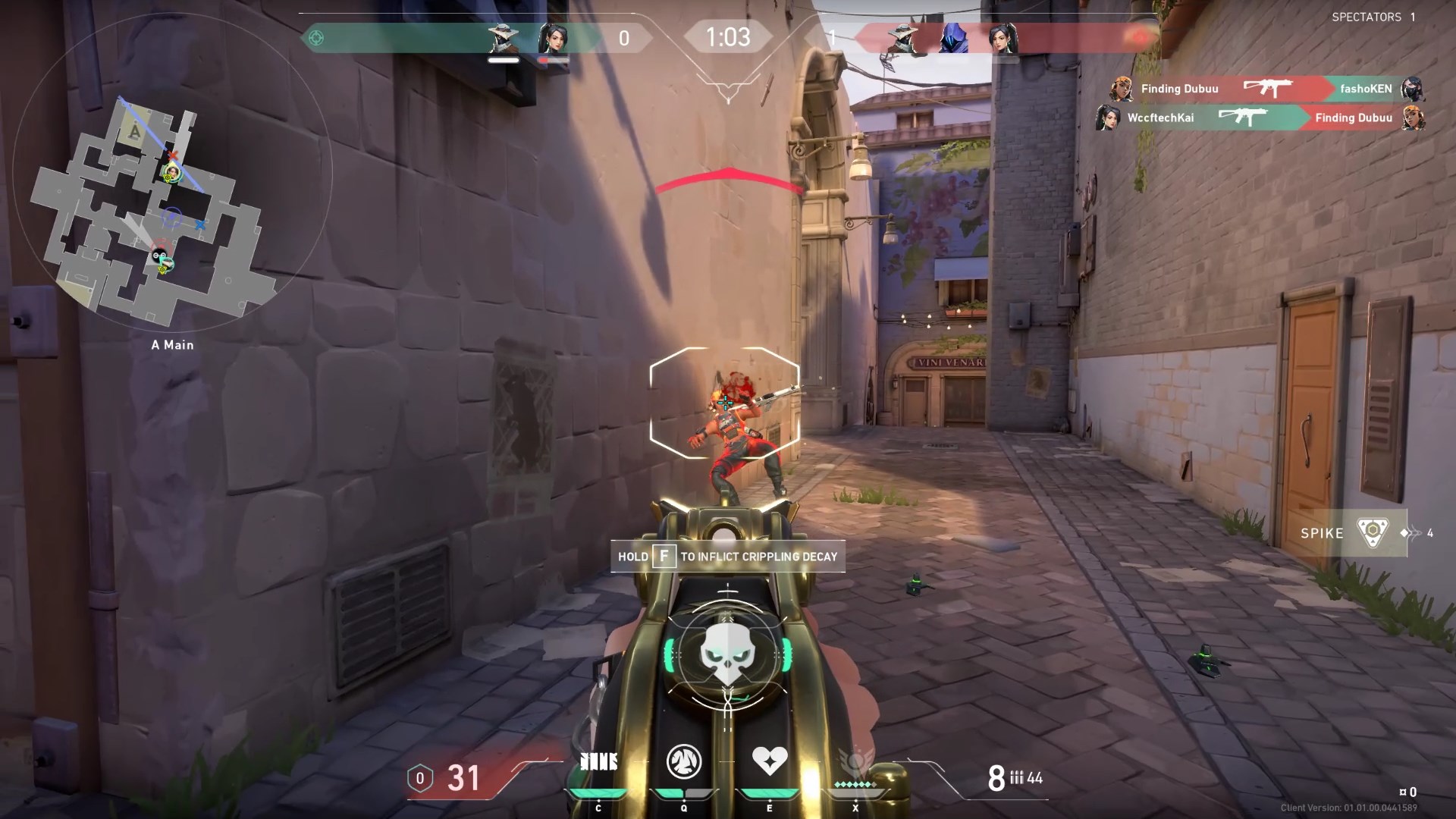 If you don't have thirty minutes to play a full game of Valorant, a truncated mode called Spike Rush can easily fit into just eight to ten. This mode still features the same bomb-focused gameplay across all of the same maps with a few key changes. Most importantly, players don't get a buy phase to pick their loadouts; instead, every player is given the same weapon that round and a full array of hero abilities (ultimates still charge independently and reset upon flipping from attacker to defender after so many rounds). For one round, everyone will be forced to use the two-barrel shotgun, in others the same sniper rifle or heavy machine gun. To mix things up, ability orbs will spawn throughout each map and can be collected for a personal or teamwide perk or to cause temporary status effects for the opposing team. These orbs are randomly chosen each game and a quick rundown of the map will tell you which orbs will be present in a given match. Spike Rush is a first-to-4 variant on the main game and each attacking player gets their own spike to plant, meaning teams can split off to different bombsites as diversions or to get to the backside of the opposing team rather than placing emphasis on protecting the carrier. Much of my time in Valorant was spent in this mode because of the leveled playing field with weaponry and the shorter time commitments.

With Valorant being free-to-play, how does Riot Games expect to make money off of this hero shooter? That's a question answered in three parts. The first obvious answer is through an in-game shop that sells cosmetics for your weapons. Each gun has a number of skins to purchase and buddies, little keychain trinkets to hang off the side of the weapon. Some of these can be upgraded with new visual effects and designs but have no impact on the gameplay itself. Riot Games has already confirmed that they don't have any current plans on releasing character skins and there's a solid tactical reason for this. When you poke your head around a corner and see the coattails of someone running off, you don't want to have to make a guess whether that was a Cypher or some other character wearing a Western-themed costume. 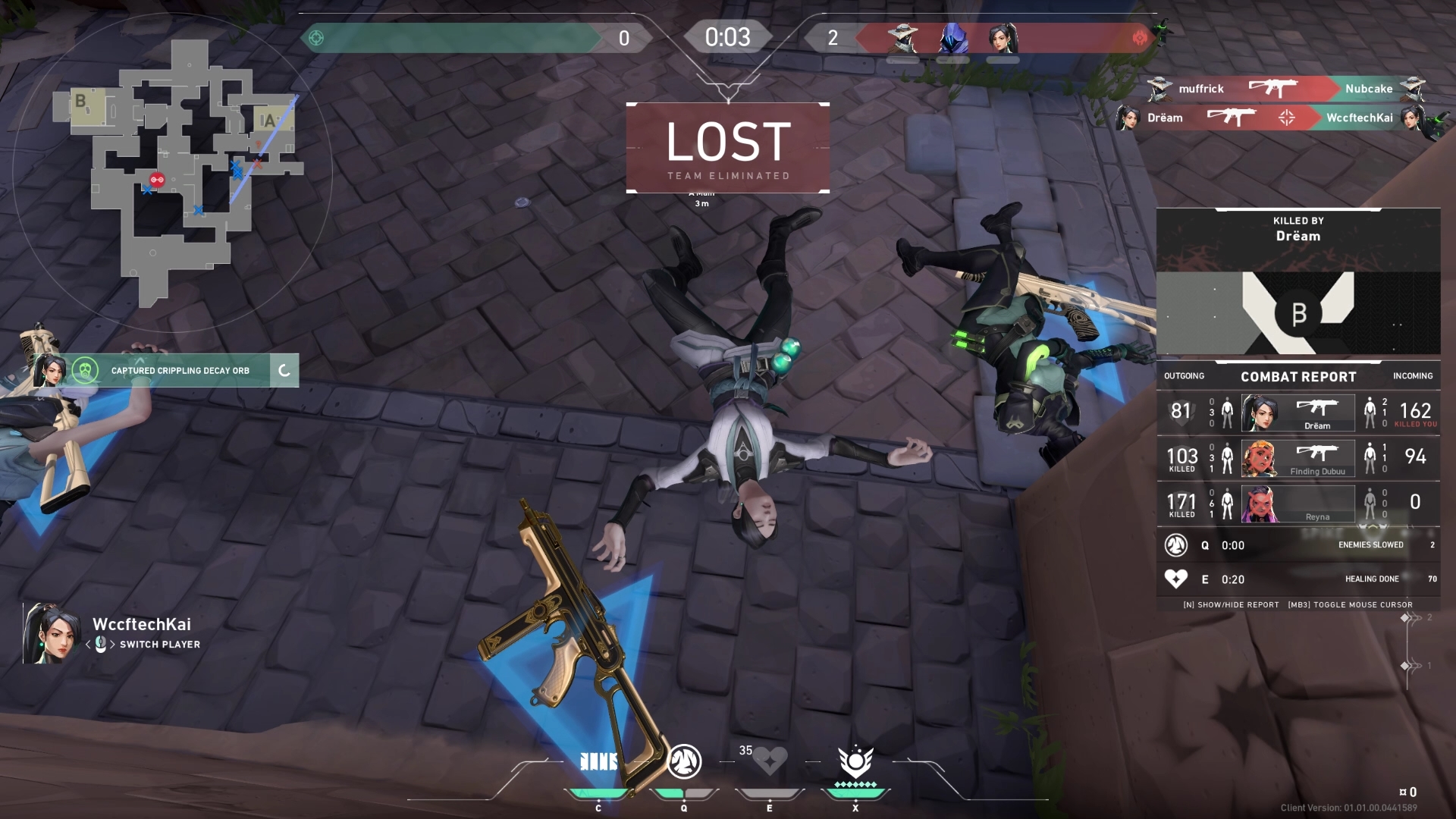 The second form of monetization is in the Battlepass, which for Act I at launch costs 1,000 Valorant points, or $10. This battle pass functions just the same as Fortnite or other popular shooters these days: complete daily and weekly challenges for bonus XP beyond normal play to unlock levels, or tiers, with new cosmetics granted at key milestones. This includes player cards and titles, sprays and other cosmetics beyond just the weapon skins and gun buddies. There is a free track to the Battlepass that unlocks a couple of items but you'll always be taunted by what unlocks you could have unlocked if you just spent the $10. Post-launch, Riot Games plans to support the games with future Battlepasses with content exclusive to each one, opening the door for a constant stream of $10 Battlepasses in the coming months.

Lastly, Valorant's various heroes are supported by a system called Contracts. Selecting a Contract for a hero you don't yet own unlocks a separate pass of progression that can be advanced through XP and regular gameplay or by spending one of Valorant's in-game currencies. The fifth tier of each Contract unlocks that agent hero for future use with the remaining tiers filled with various cosmetics unique to that Contract. It's a fine system that encourages players to keep playing to unlock the roster of 11 agents at launch with the basic carrot-on-a-stick approach to keep players launching Valorant day after day to earn something new.