Twobird is a new email app that combines live collaboration, notes, reminders, and mentions with a minimalistic user interface that removes all clutter. The app also hides signatures and other messy formatting from emails, to make them easy to read.

Twobird has been developed by Gingerlabs, the same folks who have developed the popular note-taking app Notability, for iPad. Despite highlighting notes as a prominent feature of Twobird, Gingerlabs has built no integration between the two apps. I have been using the app for a few days and here is my take on it.

Before I go into details, let me make one thing clear: I have a thing for email apps. I have a habit of trying every new email app ranging from good old Mailbox (RIP) and Edison to Spark and AirMail, and even Superhuman, to see see which app is the fastest and can help improve productivity. I still have a weird workflow that spans multiple apps. For work and personal email, I use a combination of Spark and Gmail. But more on that later.

Twobird is free to download for Windows, macOS, Android, and iOS, and it even works inside a browser. It has a beautiful simplistic user interface, which reminds me of Mailbox. After an initial look, one could be forgiven for assuming that the app does not have many features. However, the developers have neatly organized various features in the app, while maintaining a clean look, which I'm a fan of. Right off the bat, the app supports light and dark modes too. 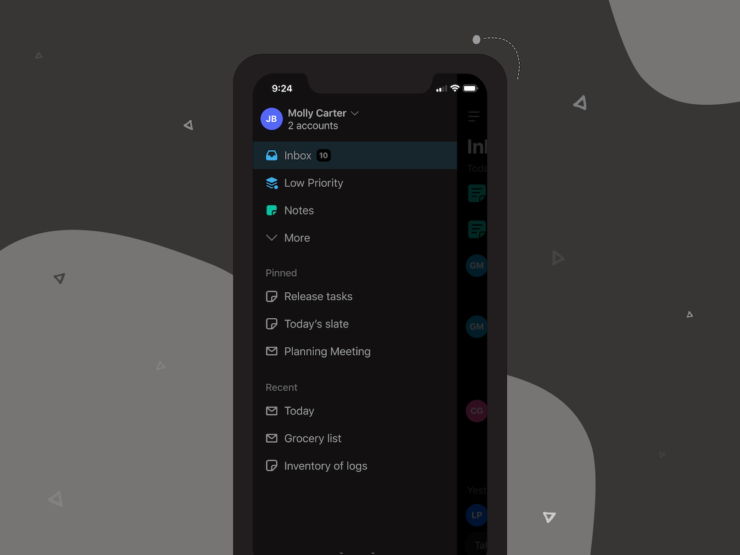 When you log in and set up your Google account, the first thing you notice is that app loads email very quickly. Whether you have an inbox with thousands of emails, or long email conversations, the app does not break a sweat. However, the signatures, messy formatting, and previous emails in a thread don't really go away as well as Twobird developers claim. I was still able to see more of that in the app compared to seeing the same email in Spark.

Replying to emails is a breeze, if you do not use signatures, or need to paste a table in the email. If you need to format any text, you have to learn to do it using keyboard shortcuts, or the markdown-like syntax that is listed in settings. However, you can @mention recipients in your emails and also respond with emojis. 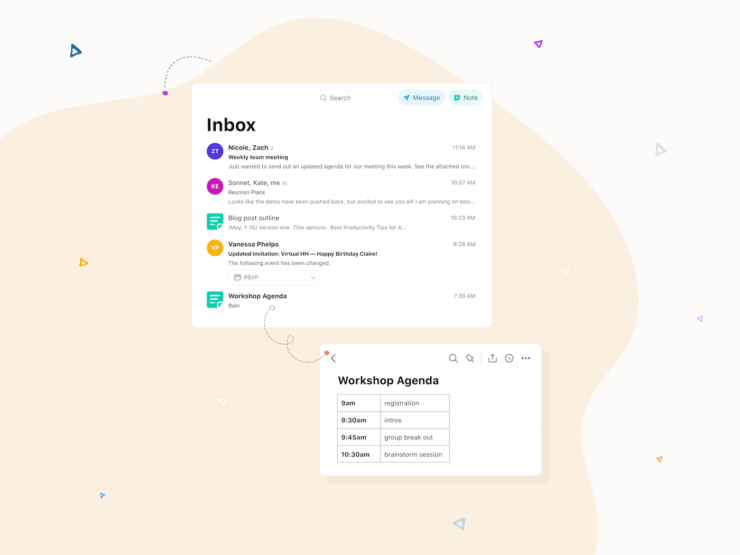 A feature called Tidy Up can be enabled in settings, which automatically archives old email threads and notifies you about what was archived. This can be helpful if you like having no emails in your inbox i.e. Inbox Zero.

Search is just disappointing in the app. There are no filters, and you cannot search for very old emails as the app just stops loading results.

The developers have really focused on the integration between notes and email in the app. You can start a note from anywhere in the app, even when you're viewing an email. Notes appear in the email list, along with their creation date and the ability to set reminders for them. Inside the notes, you can use markdown for editing, and even assign sections of the notes to team members. One a task is assigned to a team member, you can chat with them right within the document. It works similarly to Google Docs, except that it's right in your inbox. 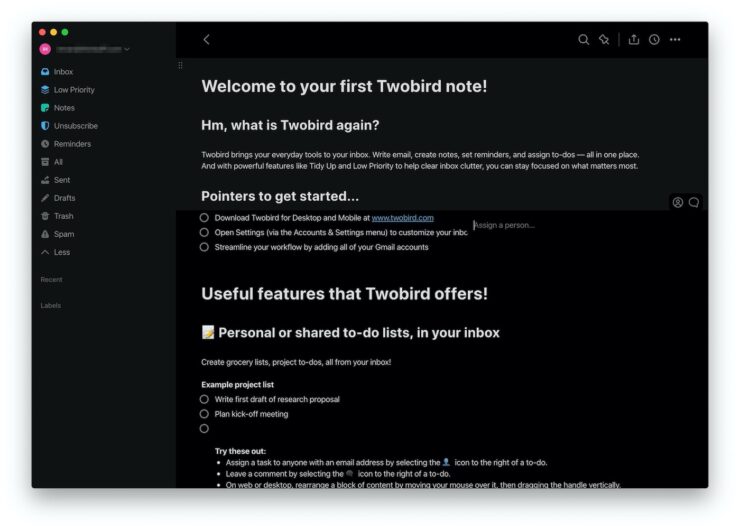 These shared notes work great in practice. You can even share them publicly. Users don't even need to login to make changes to them. However, I personally don't find the need to have my notes show in my email list. There is enough cognitive load when dealing with emails that the last thing you want is further details to look at in the same interface.

The app shows a 'recent' list of emails and notes that you viewed in the sidebar, which is helpful to jump back into the last email you were working with. You can also 'pin' emails to show them in the sidebar. However, they do not sync with 'starred' emails in Gmail. You can also enable a 'smart inbox' of sorts so that low priority email is also set aside in the sidebar.

Lastly, there is a list of subscriptions available from the sidebar, which shows all automated emails that you receive. The app allows you to select as many emails as you want and unsubscribe to them with one click or tap. It works great and helps a lot to get rid of useful junk.

The app works really well but it also lacks a few crucial features that are integral for work-related emails. It does not allow you to setup HTML emails and there are visible email formatting tools available. There is no built-in integration with cloud storage such as Dropbox or Google Drive, which are commonly used in workplaces. The search is also quite basic, which is not very useful for an email app that targets professional users.

The best thing about Twobird is that it is available on all popular desktop and mobile platforms: Windows, macOS, Android, and iOS, as well as in browsers. More often than not, email apps launch on one platform and do not support any other.

Until the app adds the aforementioned missing features, I will be sticking with a combination of Spark and Gmail. The primary reason for keeping Gmail around, specially on iOS, is that it lets me search all emails, without any limits. Spark also has limitations when it comes to email search, even though it is implemented very well. However, Spark provides exceptional support for features like signatures and email formatting, which is not something you can say about many other cross-platform email apps.

If signatures and email formatting are not important to you, give the app a try. It's fast and available on all popular platforms.

I'll be keeping an eye on Twobird often to keep track of its progress.

Twobird focuses heavily on some features like notes, and delivers them well. However, it has the potential to improve further.