Like the game itself, my opinion of Twin Mirror is split. The story is enticing and imaginative, the characters are interesting and varied, the magic realism is even slightly more down to earth for a more mature vibe. But it is a game that tugs slightly too hard at the darkness - at the edginess - for its own good.

Do you remember when Spec Ops: The Line came out? And how in the aftermath, a spew of military shooters came out, each one more desperate to make you feel like the bad guy, each one completely failing to find the subtlety in the messaging that was needed for such a plot. Twin Mirrors isn’t that bad, not by a long shot. But like other DONTNOD games, you’ll have a lot of choices to make throughout Twin Mirror and in this case, it feels like there is no right answer. Don’t get me wrong, some of the choices in Twin Mirror are great. The introduction of The Double, an imaginary figure that holds the player and the player character to account, adds a layer of complexity and intrigue to the choices. He often hints at the possible consequences of the options that most players will be instinctively drawn to, and it's going to be interesting to see how that affects the normally one-sided consensus on what you should do. But no matter what you pick, everything seems to continue to spiral down, so you never really feel like you’re winning like you’re making the right choice because you can’t.

This isn’t helped by the central character, Sam, being as glum, boring, and self-criticising as a DONTNOD character has ever been. I don’t know why the studio has gone from such nuanced, engaging characters to such an unremarkable, uninteresting avatar as this. The other characters aren’t nearly as bad, although the large cast does mean you never really get to know them deeply. Some characterisations also feel a little rushed, but the pacing of the game is well-matched, and I feel any more time spent introducing another bitter local would have undermined it. The mind palace though lets you playback memories and read about your former friendships on your own time, which does provide some sense of the relationships between the characters, even if you never get to experience them firsthand. To say the mind palace is like the ability to rewind time in Life is Strange 1 isn’t fair to the rewind feature. The puzzles there didn’t always make sense, but at least they involved an imaginative sense of logic. The puzzles in Twin Mirror on the other hand are normally about piecing things together or doing some detective work. It's more grounded, it uses more mundane elements, and its overall impact on the story is nothing compared to the earlier games' more imaginative creations.

The story follows the same trend that DONTNOD is known for at this point, and it does so well. Touching the shadowy edges of America, blending the picturesque American Dream with the real-life damages and dangers found in the nation today. Unlike other games, Twin Mirror casts you as the observer of these traumas and criticisms for the most part, instead of experiencing them first hand like in previous games, but it doesn’t pull any punches with the issues it raises such as potential police brutality, or destructive and damaging late-stage capitalism. Sam himself also has a drug addiction which is explored in Twin Mirror in an impressively mature manner.

There are a strange few moments in the Twin Mirror, where you’ll be forced to play disconcerting mini-games with stressful music and wobbly cameras. This is Twin Mirror's depiction of the central characters' often fractured mental health, and it doesn’t feel great, especially when compared to the drug issues and other difficult subjects it handles much better. One early example has you essentially playing an endless runner as you try to get Sam to calm down after the realisation that he may have been involved in a violent crime. This is represented by him sprinting down a passageway as you steer him left and right to avoid the mirrors unless they have something positive on them. If you hit the wrong mirror you have to start again. These moments don’t feel in keeping with the usual formula, nor do they feel like a welcome addition. For a game - for a studio - all about consequences, it feels strange to have these meaningless games thrown in that effectively break up the usually gripping story.

And the story is strong here, too. Revolving around the emotional, political, and economic fallout of an old friend’s death, you’ll be swept up into the murky side of quiet town living. It almost immediately goes off the rails, but in the most fun way possible, filled with twists and turns that keep you guessing and keep you engaged. Twin Mirror is also an un-episodic game, meaning you can play from beginning to end the moment you purchase it. It's a mixed blessing but generally seems like the right decision. While you can no longer mull over the story elements of the game in the weeks and months between releases, you do feel the growing narrative and emotional crescendo more readily as you approach the end.

Like I said at the beginning, I’m of two minds about Twin Mirrors. It is a good game, with a host of interesting, reflective, and surprising storytelling moments you can expect from DONTNOD. But the addition of the strange mental mini-games, as well as the sense that it is trying to get you and Sam to suffer for no reason, can sometimes make you hesitant. Perhaps this just isn’t the right year for playing a game designed to emotionally provoke you. Perhaps all the other Life is Strange games did the same and I didn’t notice. Or perhaps Sam’s constant self-deprecation just makes it far too familiar to enjoy. 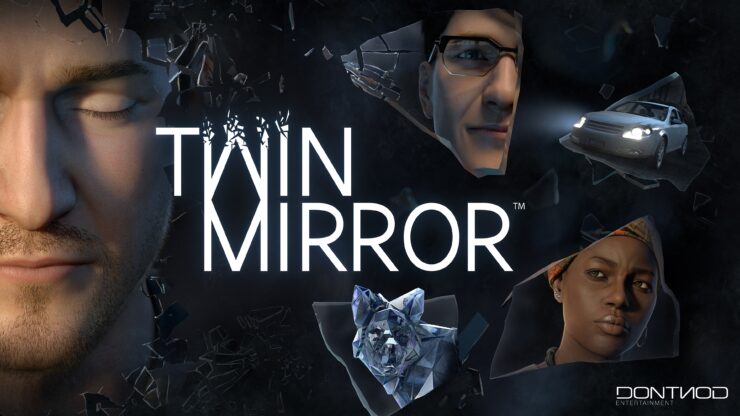 Twin Mirror is a fun, pulp detective story filled with interesting plot beats and characters, hampered only by the inclusion of strange mini-games and a really boring central character.